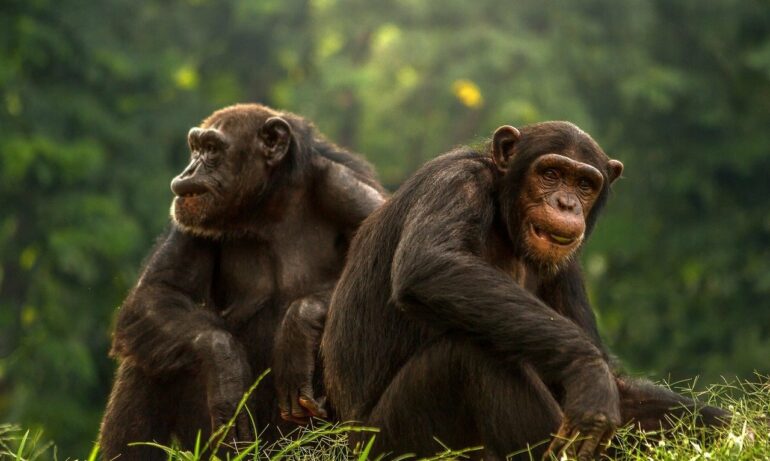 Researchers from the University of St Andrews have shown for the first time that not only do wild chimpanzees tend to look like their family members, but also some relationships are easier to detect than others.

Facial similarities between parents and children or siblings are easily detected in many human families, but it was less clear whether the same was true in other primates.

Dr. Catherine Hobaiter, from the School of Psychology and Neuroscience at the University of St Andrews, said, “Unfortunately, we couldn’t ask the chimpanzees themselves if they recognized one another. But we know that humans are good at recognizing these relationships, and if we can do it then the chimpanzees are also likely to be able to.”

“In order to be sure, we needed a lot of data, so we set up an online game that people could play as part of a community science effort to crowd-source a big enough dataset. Luckily it turns out people really like looking at pictures of chimps—over 5,000 people participated in an online game where they tried their skills at matching photos of 180 wild chimpanzees. They had to try to spot who the mother, father, or half-siblings were.”

Lead researcher Hella Péter, from the University of Kent, said, “We humans look a lot like our relatives, especially our parents, from an early age. We wanted to see if this trait is present in chimpanzees, the species closest to us on the evolutionary timeline. Like us, they are social, long-lived species, with a long childhood where infants need a lot of care.”

“By advertising relatedness, human and chimpanzee infants could gain valuable support from their relations. But there are also important differences between our species, which might have placed different pressures on how—or whether—biological family resemblance is expressed.”

“There is very little paternal care in chimpanzees, and infants might not know who their fathers are, or who some of their siblings are, and, in some cases, it might be helpful to be able to recognize some relationships in particular.”

While the study shows that humans can detect family relationships in chimpanzees, the overall accuracy was only around 30%—but the picture became much clearer once the researchers dug deeper. Family relationships became easier to detect as chimpanzees age—very young infants, who are at risk of infanticide, were more difficult to correctly match, but start to look more like their family members as they get older.

Adult chimpanzee family pairs were the easiest to recognize—at this age it might be helpful to recognize family members as potential supporters, and to avoid inbreeding. Interestingly, there seems to be a difference between the families, with a few families all sharing a very distinctive characteristic that makes them easy to spot.

Hella said, “When working with wild chimpanzees, most of the time we can’t tell who is related to who unless we see them growing up next to their mothers or get to run a DNA analysis. An ear or the curve of a brow might look a bit like a potential father’s or be seen in multiple young chimps, but it isn’t fool proof. However, some of the animals do have very distinctive features, which meant that siblings or fathers and offspring were the spitting image of each other.”

Although the study showed relationships were easier to spot with age, male chimpanzees were a little harder to match to their parents or siblings and, in general, parents and their children—especially fathers—were the easiest to match.

Hella explained, “As chimpanzees spend a long time with their mother whilst growing up, mother-offspring relationships are clear to all community members. Paternity, on the other hand, is uncertain. For young infants, signaling paternity might be a little risky, but once they are grown up and entering the social hierarchy, it can be helpful for young males who are looking to form alliances, while young females can reduce the risk of mating with related chimpanzees.”

Dr. Hobaiter said. “One of the key questions is do chimpanzees know what they look like? There are no mirrors in the forest. But if you can see a family resemblance in other family members, that might help you piece together that someone is a relative, without needing to know what you look like yourself. It’s also very unlikely that any of this is a conscious decision. We don’t think, for example, that one chimpanzee is looking at another and thinking ‘I think that’s my second cousin.'”

While the strength of the family resemblances was impressive in some families, in other families it was not. And the researchers highlight that—like humans—chimpanzees have many different types of families and friends.

Dr. Hobaiter added, “Chimpanzees have lots of different types of family relationships, including adoption, and they are well known for helping and supporting individuals they’re not related to. It is really interesting that they might be able to recognize each other in this way, but this is probably just one of the many reasons they have for deciding to help.”

Want to find out if you can match up the chimpanzee family members? While data collection is over, the study is now available as an online game.