Hard chews: Why mastication played a crucial role in evolution 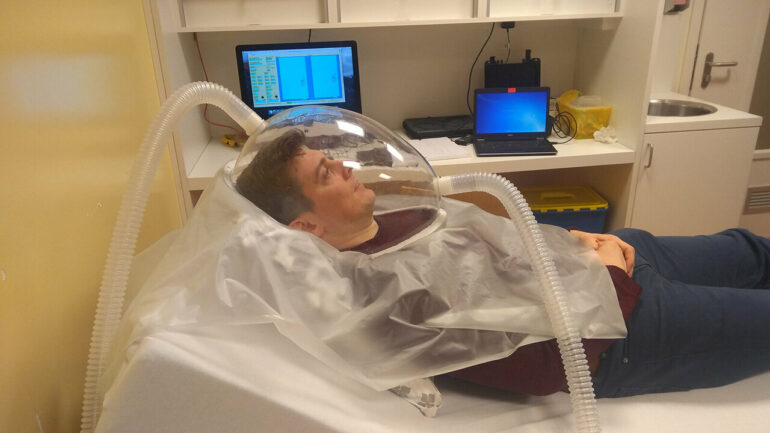 We do it every day but barely give it a thought: chewing our food. But the “simple” process of masticating food may have played a crucial role in the evolution of our jaws, facial muscles and teeth.

A team of researchers, including paleoanthropologist Amanda Henry from Leiden University, has published about this in the journal Science Advances.

“No one has ever measured the energy cost of human chewing before, and it is a significant amount. It’s highly likely that the evolutionary changes in our jaws were to optimize the chewing system,” says Henry.

Fifteen women and six men aged between 18 and 45 took part in the study. The researchers made various measurements while the volunteers chewed on two different types of tasteless gum: soft and stiff. A special hood was used to measure the volunteers’ oxygen consumption and carbon dioxide production, and electrodes were used to measure the activity of their masseter muscles.

“When chewing the softer gum, the volunteers increased their energetic expenditure by an average of 10.2% relative to their basal metabolic rate (BMR). This rose to 15.1% above for the stiffer gum,” says Henry. BMR is the amount of energy that the body burns at rest each day.

“What we discovered was that chewing food takes a lot of energy. And more importantly: the harder the food, the more energy it takes.”

Most modern foods are processed and relatively soft, but the foods consumed by early humans, such as seeds, nuts, tubers and fibrous leaves, would have been much tougher. They didn’t cook as we do now, so it would have taken more energy to chew their food. Food was a scarce commodity for early humans, which made it important from an evolutionary perspective to minimize the energy spent consuming these limited resources.

“We assume that natural selection produced jaws, facial muscles, and teeth that make the chewing system as efficient as possible, thus minimizing the energy spent chewing food,” says Henry. “We therefore think that how we humans chew today has been optimized by evolution.”

Henry believes the discovery will help us better understand the unique morphology we see in human ancestors. “The research adds a new dimension to the interpretation of early human dentofacial fossils. The results will help us understand what early humans looked like.”