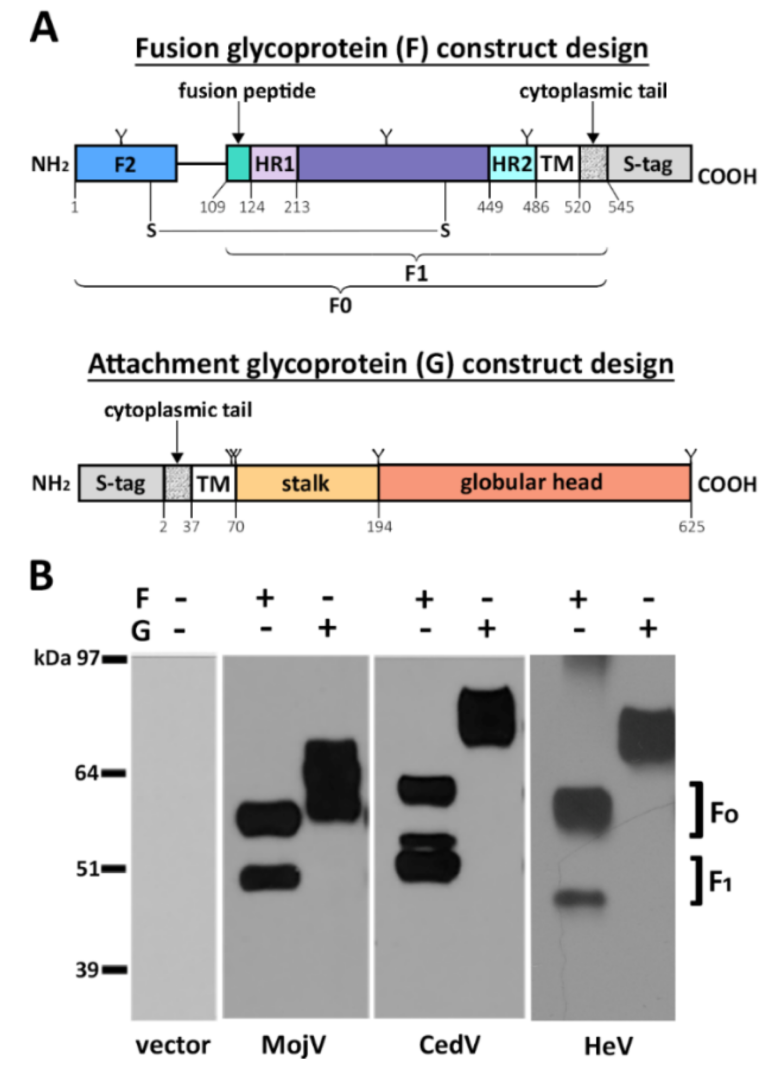 Recent molecular findings offer new details on how Nipah and Hendra viruses attack cells, and the immune responses that try to counter this onslaught. The results point toward multi-pronged tactics to prevent and treat these deadly illnesses.

This research is reported today in Science as a First Release peer-reviewed paper, published rapidly online.

Both Nipah virus and Hendra virus are carried by bats native to certain parts of the world. These henipaviruses jump species and can infect many other mammals, including humans. The viruses cause brain inflammation and respiratory symptoms. People acquiring either of these diseases stand a 50% to 100% chance of succumbing.

There is a vaccine approved for use in horses and a modified version entered a human clinical trial.

Horses can spread Hendra, possibly contracted from eating bat-contaminated fruit, to their caretakers through saliva and nasal secretions. An experimental, but not yet approved, cross-reactive antibody expected to work against both Nipah and Hendra viruses has been given to fifteen people who had a high-risk exposure. This was done under emergency compassionate use guidelines. This antibody is in a clinical trial in Australia, where it has just completed the Phase 1 stage of testing. There are no approved vaccines or therapies for use in humans against these henipaviruses, other than supportive care in the limited hope that the patient can overcome the virus.

New attempts to design life-saving preventatives and treatments became even more urgent after a new strain of Hendra was discovered a few months ago. Outbreaks of Nipah virus have appeared nearly every year over the past two decades in Bangladesh. The disease also has been seen in India and the Philippines. Henipavirus antibodies have been detected in people and Pteropus bats in Africa. It’s estimated that 2 billion people live in the parts of the world where henipavirus spillovers from bats, or intermediary animal vectors, could be a threat.

The senior author of the latest henipavirus paper in Science is David Veesler, associate professor of biochemistry at the University of Washington School of Medicine and a Howard Hughes Medical Investigator. He studies bat immunity to many dangerous viruses, and conducts molecular structure and function studies of the infectivity machinery in coronaviruses, other related viruses, and henipaviruses. His lab also researches antibody and virus interactions that hold clues for designing antivirals and vaccines for these two families of viruses.

The lead author is Zhaoqian Wang, a UW graduate student in biochemistry. Christopher Broder’s lab collaborated on the research at the Uniformed Services University and the Henry M. Jackson Foundation for the Advancement of Military Medicine.

The researchers explained that Nipah and Hendra viruses enter into cells through attachment and fusion glycoproteins, which work in a coordinated fashion. These glycoproteins are the key targets for the antibody defense system.

Through cryoelectron microscopy, the scientists were able to determine the structure of a critical component of the Nipah viruses’ infection mechanism in an interaction with a fragment of a broadly neutralizing antibody. They also observed that a mixture or “cocktail” of antibodies work better together to disarm Nipah viruses. Similar synergistic effects were seen in a set of antibodies against Hendra viruses. This combining of forces also helped keep escape mutants from emerging to sidestep the antibody response.

Examining the antibody response in laboratory animals inoculated with a critical section of the Nipah virus infection machinery provided vital information. The analysis indicated which area of the virus receptor binding protein was dominant in eliciting an immune response.

Before this study, the researchers said, nothing was available on the structure of a critical portion of henipaviruses responsible for eliciting antibody response, called the HNV G protein. This lack of information was an obstacle to understanding immunity and to improving the design of vaccine candidates.

Now that the researchers have uncovered the 3D organization and some of the conformational dynamics of the HNV G protein, science may be closer to creating a template for building new and improved vaccines.

In a simplified description of the more complex findings, an important part of the attachment structure has a neck and four heads. Only one of the four heads turns its receptor binding site in the direction of the potential host cell; the other three turn away toward the virus’ membrane. This gives the viral structure the freedom to re-orient the head domain to engage with the host receptor.

The scientists noted that the architecture then “adopts a unique two heads up and two heads down conformation that is different from any other paramyxovirus attachment glycoprotein.” The paramyxovirus is a large family of single-strand RNA viruses. They cause several distinct types of diseases, most of which are transmitted on respiratory droplets. They include measles, mumps, distemper, parainfluenza, and the henipavirus diseases that have more recently crossed from animals to humans.

In investigating the nature of antibody responses to the Nipah virus and Hendra virus attachment protein G, the scientists examined two animals that were immunized with that glycoprotein. A potent, diverse neutralizing antibody response ensued. The head domain was found to be the main, if not exclusive target, of the immunization-induced antibody neutralization, even though the full tetramer was used. This indicated that the antibody response narrowed in on the receptor-binding area.

These findings, the researchers noted, “provide a blueprint for engineering next-generation vaccine candidates with improved stability and immunogenicity.” The s would focus on the vulnerability of the head domain. They anticipate a design approach like that employed for newer computer-engineered SARS-CoV-2 and respiratory syncytial virus candidates. A mosaic of head antigens would be presented to the body in an ordered array on a multivalent display. Using only the head domain rather than the full G protein could also make manufacturing large supplies of vaccine simpler.

The title of the March 3 Science paper is “Architecture and antigenicity of the Nipah virus attachment glycoprotein.”