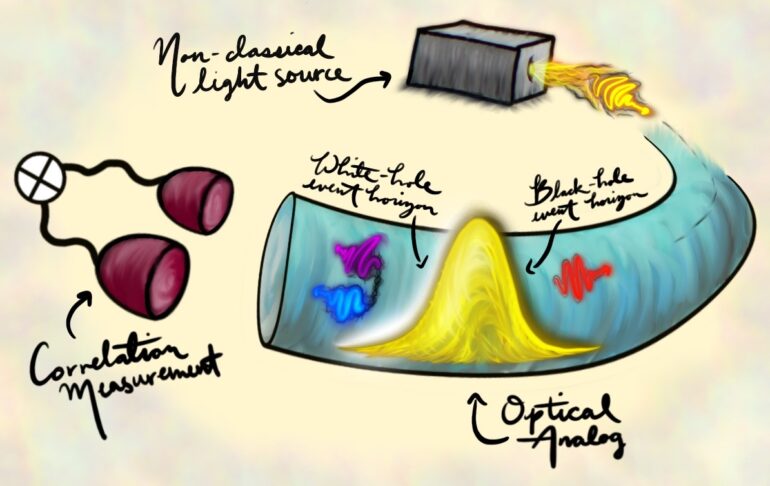 Louisiana State University physicists have leveraged quantum information theory techniques to reveal a mechanism for amplifying, or “stimulating,” the production of entanglement in the Hawking effect in a controlled manner. Furthermore, these scientists propose a protocol for testing this idea in the laboratory using artificially produced event horizons. These results have been recently published in Physical Review Letters, “Quantum aspects of stimulated Hawking radiation in an analog white-black hole pair,” where Ivan Agullo, Anthony J. Brady and Dimitrios Kranas present these ideas and apply them to optical systems containing the analog of a pair white-black hole.

Black holes are some of the most mystifying objects in our universe, largely due to the fact that their inner-workings are hidden behind a completely obscuring veil—the black hole’s event horizon.

In 1974, Stephen Hawking added more mystique to the character of black holes by showing that, once quantum effects are considered, a black hole isn’t really black at all but, instead, emits radiation, as if it was a hot body, gradually losing mass in the so-called “Hawking evaporation process.” Further, Hawking’s calculations showed that the emitted radiation is quantum mechanically entangled with the bowels of the black hole itself. This entanglement is the quantum signature of the Hawking effect. This astounding result is difficult, if not impossible, to be tested on astrophysical black holes, since the faint Hawking radiation gets overshined by other sources of radiation in the cosmos.

On the other hand, in the 1980’s, a seminal article by William Unruh established that the spontaneous production of entangled Hawking particles occurs in any system that can support an effective event horizon. Such systems generally fall under the umbrella of “analog gravity systems” and opened a window for testing Hawking’s ideas in the laboratory.

Serious experimental investigations into analog gravity systems—made of Bose-Einstein condensates, non-linear optical fibers, or even flowing water—have been underway for more than a decade. Stimulated and spontaneously-generated Hawking radiation has recently been observed in several platforms, but measuring entanglement has proved elusive due to its faint and fragile character.

“We show that, by illuminating the horizon, or horizons, with appropriately chosen quantum states, one can amplify the production of entanglement in Hawking’s process in a tunable manner,” said Associate Professor Ivan Agullo. “As an example, we apply these ideas to the concrete case of a pair of analog white-black holes sharing an interior and produced within a non-linear optical material.”

“Many of the quantum information tools used in this research were from my graduate research with Professor Jonathan P. Dowling,” said 2021 Ph.D. alumnus Anthony Brady, postdoctoral researcher at the University of Arizona. “Jon was a charismatic character, and he brought his charisma and unconventionality into his science, as well as his advising. He encouraged me to work on eccentric ideas, like analog black holes, and see if I could meld techniques from various fields of physics—like quantum information and analog gravity—in order to produce something novel, or ‘cute,’ as he liked to say.”

“The Hawking process is one of the richest physical phenomena connecting seemingly unrelated fields of physics from the quantum theory to thermodynamics and relativity,” said Dimitrios Kranas, LSU graduate student. “Analog black holes came to add an extra flavor to the effect providing us, at the same time, with the exciting possibility of testing it in the laboratory. Our detailed numerical analysis allows us to probe new features of the Hawking process, helping us understand better the similarities and differences between astrophysical and analog black holes.”