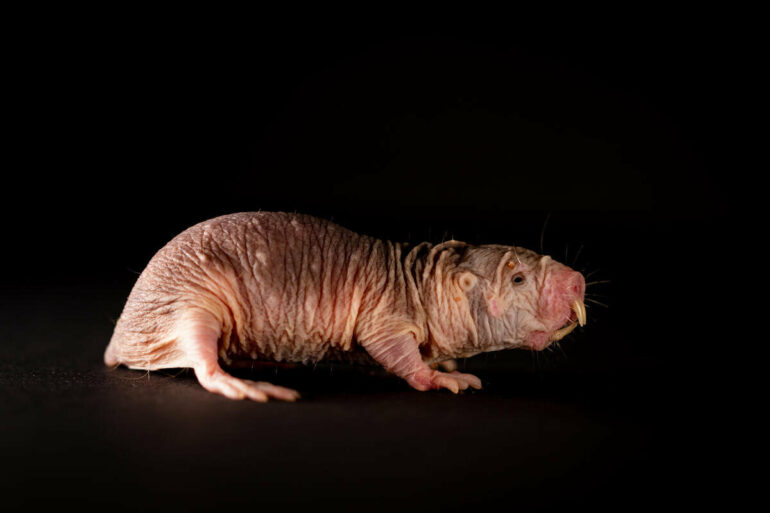 Naked mole-rats are full of surprises. The latest is that higher-ranked mole-rats most likely have an immunological advantage over animals with lower social status, a discovery made by Professor Gary Lewin’s lab at the MDC. The team is now reporting its findings in Open Biology.

Naked mole-rats not only look strange, they have a strange lifestyle, too: they spend their entire lives underground. They also feel very little pain, rarely develop cancer and are exceptionally long-lived for a rodent—living up to 37 years. All this makes the hairless burrow-dwellers prime candidates for scientific study.

For nearly 20 years, Professor Gary Lewin at the Max Delbrück Center for Molecular Medicine in the Helmholtz Association (MDC) has been researching these extraordinary animals. “The naked mole rats live in strictly organized colonies,” Lewin says. “Each animal knows its rank and the tasks it has to perform.” Now Lewin’s team in the Molecular Physiology of Somatic Sensation Lab, together with scientists at the German Cancer Research Center (DKFZ), Freie Universität Berlin and the University of Pretoria, has made a new discovery: The researchers report in Open Biology that naked mole-rats of higher social rank have a larger spleen. The organ plays a key role in the immune system and is involved in the formation, maturation and retention of immune cells. “This could mean that higher-ranking animals have better built-in defenses than animals below them on the social hierarchy,” says lead author Dr. Valérie Bégay of Lewin’s team.

The shriveled sausages on four legs are so special that Bégay carefully examines each naked mole-rat used in an experiment. She noticed that some of the animals had a much larger spleen than others. That got her wheels turning. “We initially thought that the animals with the larger spleens were sick,” the researcher recounts. That’s because the organ swells up when the body fights inflammation and disease, as many types of immune cells are manufactured and stored there. “But we couldn’t find anything, not even inflammatory markers in the blood or any other evidence of disease,” she reports. “There had to be another explanation for the enlarged spleen.”

With the help of Dr. Alison Barker, Bégay found out that spleen size is linked to the animal’s social status. The scientist, who recently studied mole-rat dialects, is very experienced in conducting behavioral research experiments. They determined rodent rank by having two naked mole-rats run towards each other in a tube. “The higher-ranked animal will always climb over the lower-ranked animal,” Barker says. “It keeps the upper hand, so to speak.”

It was through this method that the researchers learned that the higher-ranked animals had enlarged spleens. Bégay then studied the organs at the molecular level. She used RNA sequencing and tissue sample analysis to classify the different immune cells in the spleen. This showed that the number of macrophages is increased in the enlarged organs. Macrophages act as the body’s defense soldiers. They kill invading pathogens by surrounding and swallowing them. That’s why they are also called scavenger cells. “The enlarged spleen might enable the higher-ranked animals to fight infections better and deal with inflammation and injury more easily,” Bégay explains.

A stronger immune system in higher-ranking animals is not unique to naked mole-rats. In macaques, too, the higher-ranked group members are better equipped to fight disease. But instead of an enlarged spleen, the monkeys have a differently organized system of immune protection. “It really surprised us that there could be such large differences in spleen size without disease being present,” Lewin says. “The rank of a naked mole-rat depends on how it behaves in the group. The size of the spleen is linked in turn to rank. This would ultimately mean that behavior directly affects the physical characteristics of the immune system, or vice versa.”

The researchers also suspect that the spleen influences an animal’s longevity. Successful naked mole-rats—that is, those able to get their way with other colony members—live longer. The queen does not typically die of old age, but is usually killed during a “coup”—namely, when another female gathers male followers around her and removes the old queen. “Up until her last day, the queen is fertile,” says Lewin. “She never experiences menopause—as if her organism did not age.” This suggests at the very least that a strong immune system slows down the aging process. Mammals do not usually produce offspring until the end of their lives: they have a post-reproductive lifespan.

The scientists are now asking new questions. For instance, which comes first: the larger spleen or the higher rank? This has not yet been determined. The only thing that is clear is that naked mole-rats are not born into their social status, but work their way up. The desire for sex may be their driving force: Only the highest-ranking members—the queen and two to three pashas—are allowed to reproduce. “This could be a selection mechanism,” Lewin says. “By allowing only the most successful to mate, it ensures that the animals with the strongest immune systems pass on their genes.” Lewin also hopes to gain new insights into cancer. Naked mole-rats have a very efficient defense system against the disease. Whether the spleen plays a role in this remains to be seen. First, the scientists must conduct further cell analysis. “We are still at the very beginning,” he stresses.