More flexible than we thought: Worms provide new insights into the evolution and diversification of TGF-beta signaling 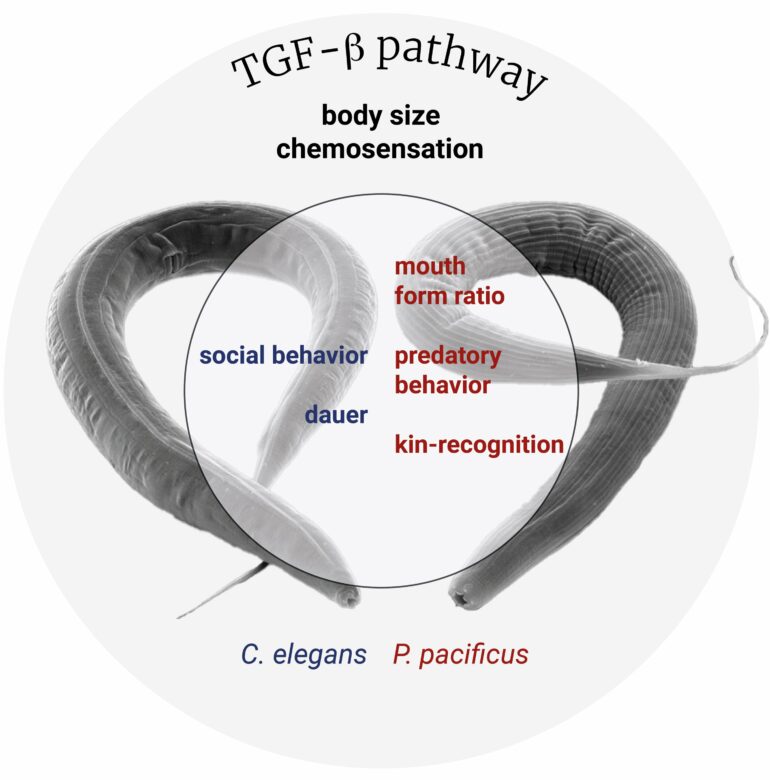 The TGF-ß cellular signaling network, essential to various functions in all metazoans and involved in many severe human pathologies like autoimmune diseases and cancer, is more flexible than previously thought.

Researchers at the MPI for Neurobiology of Behavior and the MPI for Biology discovered an unknown genetic variability in this signaling pathway amongst different nematode species resulting in morphological and behavioral variations. This fresh view on the TGF-ß machinery, published in Molecular Biology and Evolution, is important for understanding the evolution of signaling pathways, their adaptability to acquire novel functions and for new strategies to control parasitic nematodes.

Have you ever thought about what you have in common with tiny roundworms? As the “nematodes” are metazoan animals like we are, it is actually quite a lot. We have similar organ systems and what we learn from nematodes about gene function may be directly applicable to human development and disease. The best understood species is Caenorhabditis elegans and one of the many questions scientists investigate in this model species is “cellular signaling,” how molecules work together to control a cells function.

A very important messenger protein or “cytokine” is the multifunctional Transforming growth factor-ß (TGF-ß) which is secreted by many cell types in both vertebrates and invertebrates. Through its complex signaling network it regulates gene expression and plays a crucial role throughout the lifetime of an animal for development, aging, metabolism and immunity. It is not surprising that a malfunction in these pathways can lead to severe pathologies like rheumatic or cardiovascular diseases or cancer and as such, interfering agents, like TGF-ß inhibitors, are already used as therapeutics.

Very recently, it was discovered that TGF-ß also plays a crucial role in some severe COVID-19 infections, where a chronic immune reaction develops that is no longer directed against the virus itself, but rather against the patient’s own body.

Striking variability in behavior and morphology

Researchers of the Max Planck Institute for Neurobiology of Behavior—caesar (MPINB) in Bonn, the Max Planck Institute for Biology in Tübingen and the California State University have now gained new insights into the evolution and the function of TGF-ß signaling. They identified and compared the TGF-ß genes across nine different nematode species, which revealed surprising differences in the number of TGF-ß genes across different species.

The team next focused on the species Pristionchus pacificus, which showed many variations in the number of TGF-ß genes compared to other nematodes including C. elegans. By making mutations in numerous different parts of the signaling pathway using genetic tools like CRISPR/Cas9, they found that there were many unexpected changes in function between P. pacificus compared to C. elegans.

They showed that the so-called DBL-1 pathway regulating body morphology appears highly conserved, whereas they found a striking variability in the function of the so-called DAF-7 pathway. This included important differences in development, environmental sensing and in the behaviors between these species.

The researchers found that TGF-ß signaling has a crucial impact on important phenotypes in P. pacificus. While C. elegans only feeds on bacteria, P. pacificus is an omnivore and is capable of predating on other nematode larvae. In addition, they have a kin-recognition system which protects their offspring from being eaten. This study showed that TGF-ß signaling in P. pacificus is important for forming the mouth structures associated with predation and notably, also for establishing the kin signal to identify and protect their relatives.

“Our findings show a previously unknown and surprising flexibility in the TGF-ß signaling pathway across nematodes. We need to think outside of the box and explore signaling networks in other less typical model species to really understand their function, how they regulate behavioral differences between the species and how complex traits evolve.” says Dr. James Lightfoot who leads the research group “Genetics of Behavior” at the MPINB.

Infections with parasitic worms, Helminthiasis, is a worldwide problem for human and livestock health and resistance to existing anthelmintics are emerging. Importantly, free-living nematodes such as C. elegans and P. pacificus can offer important insights for understanding parasitic nematodes further as they share many similarities with their parasitic cousins.

In particular, these free-living species are able to enter an alternative long-lived and stress-resistant developmental stage called the “dauer” form when they encounter adverse conditions and this has many similarities with the infective larvae of parasitic nematodes. As such, a lot of research has been focused on the dauer stage in C. elegans, and TGF-ß signaling has been found to be important for dauer formation.

“In P. pacificus, we did not find the same effect. Our results suggest that the mechanism seen in C. elegans might not necessarily be the same in other nematodes,” says Dr. James Lightfoot. Understanding the so far unknown variability between different species is therefore important for the development of new therapeutic approaches against harmful parasites.


Citation:
More flexible than we thought: Worms provide new insights into the evolution and diversification of TGF-beta signaling (2022, December 5)