How sperm protect their membranes from oxidation: A comparison of species 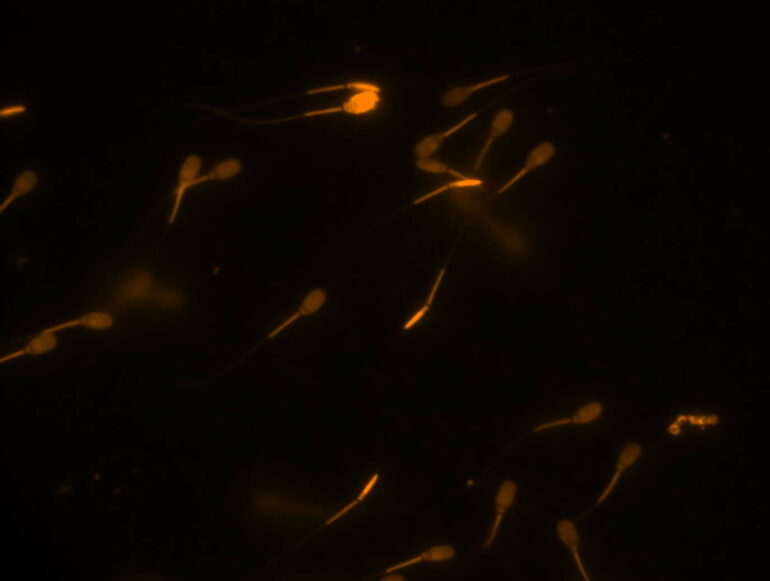 A scientific team from the Leibniz Institute for Zoo and Wildlife Research (Leibniz-IZW) and Leipzig University conducted a comparative analysis of lipid profiles of sperm to obtain insights into their susceptibility to damaging oxidation as well as the antioxidant potential in the semen of different species. The team found that there were major differences in the composition of lipids in sperm and seminal fluid, with more closely related species such as domestic cattle, domestic pig and domestic horse showing similarities in lipid profile. This contrasts with the lipid composition of erythrocytes and blood plasma from different species, which is relatively uniform. The results help to improve our understanding of the effect of oxidative stress on reproductive processes and improve assisted reproduction measures in future. They were published in the scientific journal PLOS ONE.

On their way to the oocytes, sperm are exposed to oxidative stress, which, among other things, can trigger the oxidation of membrane lipids and thus damage the cells in their structure or functioning. Using sperm and blood from animal species that differ in their reproductive system and type of nutrition (domestic cattle, domestic pig, domestic horse, African lion, humans), a team of specialists in reproductive biology and lipid biochemistry analyzed the sensitivity of sperm and erythrocytes to oxidation and the accumulation of harmful products of lipid oxidation. In addition, the team also investigated the protective capacity of the seminal fluid.

“If lipid properties depend on cell function, we would expect differences in the lipid profile between sperm and erythrocytes. If it is nutrition which primarily determines the predominant lipids in the membranes, the lipid profile would be rather similar in both cell types of a species,” says Karin Müller, a scientist at Leibniz-IZW. “The results are important for estimating sperm properties in species that have not yet been studied and for adjusting prophylactic measures when sperm conservation and artificial insemination are used for species preservation, where the oxidative stress for gametes is increased by the freezing process.”

The research team found that the lipid composition of erythrocytes from different species is relatively uniform. However, there are large differences in the composition of lipids in sperm and seminal fluid, with more closely related species such as domestic cattle, domestic pig and domestic horse showing similarities in lipid profile. “These results suggest that the lipid composition is not determined by the type of diet, but by the relatedness of the species and by functional requirements of the cell membranes,” says Ulrike Jakop, a former scientist at Leibniz-IZW. On the one hand, the cell membrane of sperm must have a high degree of flexibility to enable the movement of the gametes and later their fusion with the oocyte. This is why sperm lipids, for example, contain a high proportion of polyunsaturated fatty acids, which are particularly susceptible to oxidative stress. On the other hand, the stability of the sperm must be maintained until it fuses with the oocyte. African lion sperm, for example, which are deposited by the male far downstream in the female genital tract, have a long way to travel through various sections of the genital tract to reach the oocyte. Their membranes consist of less oxidation-sensitive ester lipids and sphingomyelins with primarily saturated fatty acids. For bull spermatozoa, with membranes containing extremely oxidation-sensitive, unsaturated ether lipids (plasmalogens), highly efficient protective mechanisms have apparently evolved in the semen. When lipids of the sperm membrane are oxidized, so-called lysolipids are formed. Their accumulation would destroy the integrity of the membrane. “In the sperm of all species studied, the accumulation of harmful lysolipids is largely avoided by the presence of less sensitive lipids from the outset, the timely elimination of radicals and the rapid degradation of oxidized lipids. Interestingly, samples with high lysolipid concentrations in sperm were particularly found in humans, although the lipid profile shows less oxidation-sensitive lipids and the protective mechanisms are very effectively developed,” explains Kathrin M. Engel, a scientist at Leipzig University. “Presumably, lifestyle factors cause high oxidative stress, which overtaxes the natural portfolio of protective mechanisms.”

Further studies will help to understand individual imbalances between oxidative stress and protective factors in humans and animals, as well as to adjust measures of assisted reproduction.


Citation:
How sperm protect their membranes from oxidation: A comparison of species (2022, March 15)