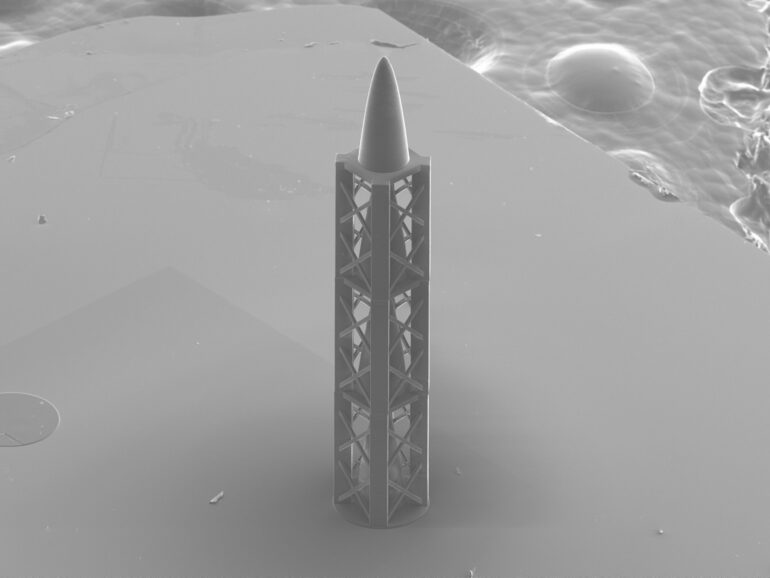 Paul Scherrer Institute scientists have developed a ground-breaking achromatic lens for X-rays. This allows the X-ray beams to be accurately focused on a single point even if they have different wavelengths. The new lens will make it much easier to study nanostructures using X-rays, according to a paper just published by the researchers in the scientific journal Nature Communications.

Achromatic lenses are essential for producing sharp images in photography and optical microscopes. They ensure that different colors—i.e. light of different wavelengths—have a common focal point. To date, however, achromatic lenses have not been available for X-rays, so that high-resolution X-ray microscopy has only been possible with monochromatic X-rays. In practice, this means that all other wavelengths have to be filtered out of the X-ray beam spectrum and hence only a small portion of the light can effectively be used, resulting in a relatively inefficient image capturing process.

A team of PSI scientists have now solved this problem by successfully developing an achromatic X-ray lens for X-rays. Since X-rays can reveal much smaller structures than visible light, the innovative lens will particularly benefit R&D work in sectors such as microchips, batteries and materials science, among others.

More complex than in the visible range

The fact that it took until now to develop an achromatic lens for X-rays may at first seem surprising: for visible light, achromatic lenses have been around for over 200 years. These are usually composed of two different materials. The light penetrates the first material and splits into its spectral colors—much like when passing through a conventional glass prism. It then passes through a second material to reverse this effect. In physics, the process of separating different wavelengths is called “dispersion.”

“This basic principle applied in the visible range does not work in the X-ray range, however,” explains the physicist Christian David, Head of the X-Ray Optics and Applications research group at PSI’s Laboratory for X-ray Nanoscience and Technologies. “For X-rays, no pair of materials exists for which the optical properties differ sufficiently over a broad range of wavelengths for one material to counterbalance the effect of the other. In other words: the dispersion of materials in the X-ray range is too similar.”

Two principles rather than two materials

So instead of looking for the answer in the combination of two materials, the scientists linked together two different optical principles. “The trick was to realize that we could position a second refractive lens in front of our diffractive lens,” says Adam Kubec, lead author of the new study. Until recently, Kubec was a researcher in Christian David’s group, and now works for XRnanotech, a spin-off that emerged from PSI’s research in X-ray optics.

“For many years now, PSI has been a world leader in the production of X-ray lenses,” says David. “We supply specialized lenses, known as Fresnel zone plates, for X-ray microscopy at synchrotron light sources worldwide.” David’s research group uses established nanolithography methods to produce diffractive lenses. However, for the second element in the achromatic lens—the refractive structure—a new method was needed, which has only recently become available: 3D printing on the micrometer scale. This ultimately enabled Kubec to produce a shape that vaguely resembles a miniature rocket.

The newly developed lens enables the leap from research application to X-ray microscopy in commercial use, for example in industry. “Synchrotron sources generate X-rays of such high intensity that it is possible to filter out all but a single wavelength while still preserving enough light to produce an image,” Kubec explains. However, synchrotrons are large-scale research facilities. To date, R&D staff working in industry are allocated a set beam time to conduct experiments at synchrotrons at research institutes, including the Swiss Light Source SLS at PSI. This beam time is extremely limited, expensive and requires long-term planning.

“Industry would like to have much faster response loops in their R&D processes,” Kubec says. “Our achromatic X-ray lens will help enormously with this: It will enable compact X-ray microscopes that industrial companies can operate on their own premises.”

Together with XRnanotech, PSI plans to market the new lens. Kubec says they already have suitable contacts with companies specializing in building X-ray microscopy facilities on the lab scale.

To characterize their achromatic X-ray lens, scientists used an X-ray beamline at SLS. One of the methods employed there is a highly developed X-ray microscopy technique called ptychography. “This technique is normally used to examine an unknown sample,” says the study’s second author, Marie-Christine Zdora, a physicist working in Christian David’s research group and an expert in X-ray imaging. “We on the other hand used ptychography to characterize the X-ray beam and thus our achromatic lens.” This enabled the scientists to precisely detect the location of the X-ray focal point at different wavelengths.

They additionally tested the new lens using a method where the sample is moved through the focus of the X-ray beam in small raster steps. When the wavelength of the X-ray beam is changed, the images produced with a conventional X-ray lens become very blurred. This, however, does not happen when using the new achromatic lens. “When we eventually got a sharp image of the test sample over a broad range of wavelengths, we knew our lens was working,” says a delighted Zdora.

David adds: “The fact that we were able to develop this achromatic X-ray lens at PSI and will soon be bringing it to market with XRnanotech shows that the type of research we do here can lead to practical applications in a very short period of time.”