How the last 12,000 years have shaped what humans are today 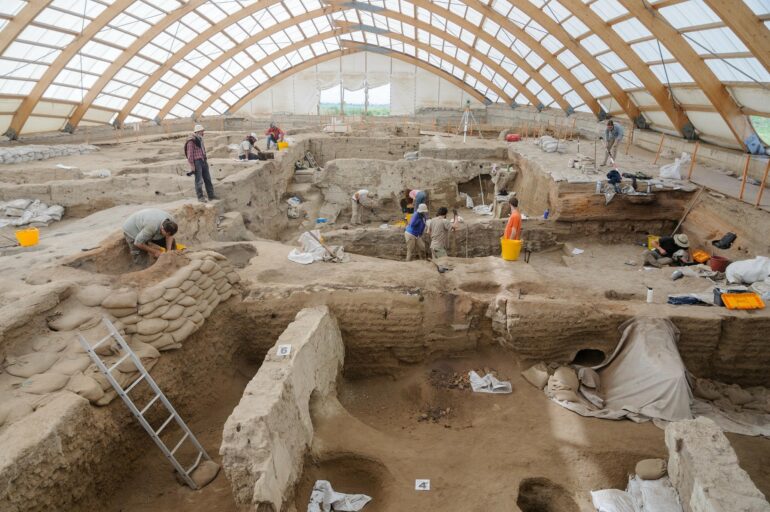 While humans have been evolving for millions of years, the past 12,000 years have been among the most dynamic and impactful for the way we live today, according to an anthropologist who organized a special journal feature on the topic in the Proceedings of the National Academy of Sciences.

Our modern world all started with the advent of agriculture, said Clark Spencer Larsen, professor of anthropology at The Ohio State University.

“The shift from foraging to farming changed everything,” Larsen said.

Along with food crops, humans also planted the seeds for many of the most vexing problems of modern society.

“Although the changes brought about by agriculture brought plenty of good for us, it also led to increasing conflict and violence, rising levels of infectious diseases, reduced physical activity, a more limited diet, and more competition for resources,” he said.

Larsen is organizer and editor of a Special Feature published in the Jan. 17, 2023, issue of the journal Proceedings of the National Academy of Sciences. He is also author of the introduction to the section, titled “The past 12,000 years of behavior, adaptation, population, and evolution shaped who we are today.”

The Special Feature includes eight articles based mostly on bioarchaeology—the study of human remains and what they can tell scientists about changes in diet, behavior and lifestyle over the last 10 millennia or so. Larsen is co-author on two of these eight articles.

One message that connects all the articles is that the major societal issues of today have ancient roots, he said.

“We didn’t get to where we are now by happenstance. The problems we have today with warfare, inequality, disease and poor diets, all resulted from the changes that occurred when agriculture started,” Larsen said.

The shift from foraging to farming led humans, who had led a mostly transitory life, to create settlements and live a much more sedentary existence.

“That has had profound implications for virtually every aspect of our lives back then, now, and going forward,” he said.

Growing food allowed the world population to grow from about 10 million in the later Pleistocene Epoch to more than 8 billion people today.

But it came at a cost. The varied diet of foragers was replaced with a much more limited diet of domesticated plants and animals, which often had reduced nutritional quality. Now, much of the world’s population relies on three foods—rice, wheat and corn—especially in areas that have limited access to animal sources of protein, Larsen said.

Another important change in the diet of humans was the addition of dairy. In one article in the Special Feature, researchers examined dental calculus found in remains to show the earliest evidence of milk consumption dates to about 5,000 years ago in northern Europe.

“This is evidence of humans adapting genetically to be able to consume cheese and milk, and it happened very recently in human evolution,” he said. “It shows how humans are adapting biologically to our new lifestyle.”

As people began creating agricultural communities, social changes were occurring as well. Larsen co-authored one article that analyzed strontium and oxygen isotopes from tooth enamel of early farming communities from more than 7,000 years ago to help determine where residents were from. Results showed that Çatalhöyük, in modern Turkey, was the only one of several communities studied where nonlocals apparently lived.

“This was laying the foundation for kinship and community organization in later societies of western Asia,” he said.

These early communities also faced the problem of many people living in relatively cramped areas, leading to conflict.

In one article, researchers studying human remains in early farming communities across western and central Europe found that about 10% died from traumatic injuries.

“Their analysis reveals that violence in Neolithic Europe was endemic and scaling upward, resulting in patterns of warfare leading to increasing numbers of deaths,” Larsen writes in the introduction.

Research reported in this PNAS issue also reveals how these first human communities created the ideal conditions for another problem that is top-of-mind in the world today: infectious disease. Raising farm animals led to the common zoonotic diseases that can be transmitted from animals to people, Larsen said.

While the climate change crisis of today is unique in human history, past societies have had to deal with more short-term climate disasters, particularly long droughts.

In a perspective article co-authored by Larsen, the researchers noted that economic inequality, racism and other types of discrimination have been key factors in how societies have fared under these climate emergencies, and these factors will play a role in our current crisis.

UK plants flowering a month earlier due to climate change

Those communities with more inequality were most likely to experience violence in the wake of climate disasters, Larsen said.

What may be most surprising about all the changes documented in the Special Feature is how quickly they all occurred, he said.

“When you look at the six or so million years of human evolution, this transition from foraging to farming and all the impact it has had on us—it all happened in just a blink of an eye,” Larsen said.

“In the scale of a human lifespan it may seem like a long time, but it really is not.”

The research presented in the Special Feature also shows the amazing ability of humans to adjust to their surroundings.

“We are remarkably resilient creatures, as the last 12,000 years have shown,” he said.