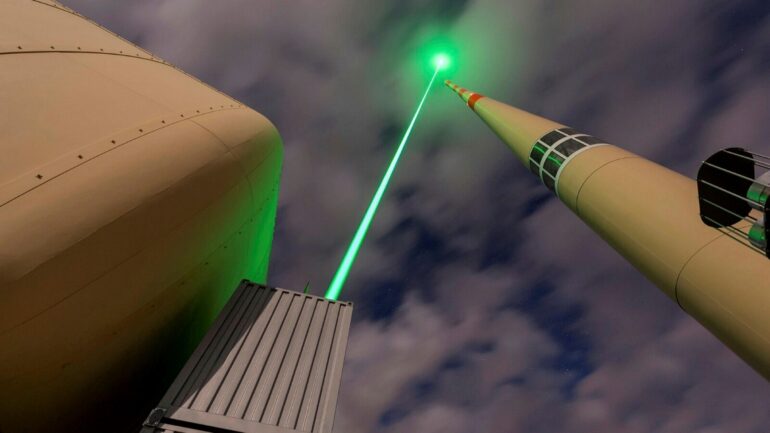 Forest fires, power cuts and damaged infrastructure…lightning fascinates and destroys in equal measure, causing as many as 24,000 deaths a year worldwide not to mention widespread destruction. Even today, the lightning rod invented by Benjamin Franklin is the best form of protection. And yet, these rods do not always provide optimal protection for sensitive sites.

A European consortium consisting of the University of Geneva (UNIGE), École Polytechnique (Paris), EPFL, hes-so and TRUMPF scientific lasers (Munich) has developed a promising alternative: the Laser Lightning Rod or LLR. After testing the LLR on the summit of Säntis (in Switzerland), the researchers now have proof of its feasibility. The rod can deflect lightning over several dozen meters even in poor weather. The results of this research are published in the journal Nature Photonics.

Lightning is one of the most extreme of natural phenomena. An abrupt electrostatic discharge of millions of volts and hundreds of thousands of amperes, lightning can be observed in a single cloud, between several clouds, between a cloud and the ground and vice-versa. As fascinating as it is destructive, lightning is responsible for up to 24,000 deaths a year. From power cuts and forest fires to damaged infrastructure, it also causes extensive devastation totaling several billion dollars.

Lightning-protection devices have changed little since 1752 when Benjamin Franklin invented the lightning rod—a pointed, conductive mast made of metal connected to the ground. The traditional rod is to this day still the most effective form of external protection: it protects a surface with a radius that is more or less equal to its height.

So, a 10 m-high rod will secure an area with a 10 m radius. However, since the height of the masts is not limitlessly extendable, it is not an optimal system for protecting sensitive sites over a wide area, such as an airport, wind farm or nuclear power plant.

A European consortium led by UNIGE and École Polytechnique (Paris) has been looking at how to solve this problem in close partnership with EPFL (EMC Lab, Prof. Farhad Rachidi), TRUMPF scientific lasers, ArianeGroup, AMC (Prof. A. Mysyrowicz) and the School of Engineering and Management (hes-so, Prof. Marcos Rubinstein).

It has been working on a device known as the Laser Lightning Rod (LLR). By generating channels of ionized air, the LLR was used to guide lightning along its beam. Extending upwards from a traditional lightning rod, it could increase its height virtually as well as the surface of the area it is protecting.

“When very high power laser pulses are emitted into the atmosphere, filaments of very intense light form inside the beam,” begins Jean-Pierre Wolf, full professor in the Department of Applied Physics in the Physics Section of UNIGE’s Faculty of Science, and the study’s last author. “These filaments ionize the nitrogen and oxygen molecules in the air, which then release electrons that are free to move,” continues Professor Wolf. “This ionized air, called ‘plasma,’ becomes an electrical conductor.”

The LLR project meant that a new laser had to be developed with an average power of one kilowatt, one Joule per pulse and a duration per pulse of one picosecond. The rod is 1.5 m wide, 8 m long and weighs more than 3 tons, and was designed by TRUMPF scientific lasers. This terawatt laser was tested on the summit of Säntis (in Appenzell, at a height of 2,502 m) already instrumented by EPFL and HEIG-VD / HES-SO to observe lightning.

It was focused above a 124 m transmitter tower belonging to the telecommunications provider Swisscom, which was equipped with a traditional lightning rod. This is one of the structures most affected by lightning in Europe. “The main difficulty was that it was a life-size campaign. We had to prepare an environment in which we could install and protect the laser,” says Pierre Walch, a Ph.D. student in the Laboratoire d’Optique Appliquée (LOA), a joint research unit CNRS, École Polytechnique, ENSTA Paris, Institut Polytechnique de Paris, Palaiseau, France.

The laser was activated every time storm activity was forecast between June and September 2021. The area had to be closed to air traffic in advance. “The aim was to see whether there was a difference with or without the laser,” explains Aurélien Houard, a research scientist in the Laboratoire d’Optique Appliquée (LOA) and coordinator of the project. “We compared the data collected when the laser filament was produced above the tower and when the tower was struck naturally by lightning.”

Effective even through cloud

It took almost a year to analyze the colossal amount of data collected. This analysis now shows that the LLR laser can guide lightning effectively. Professor Wolf further explains, “From the first lightning event using the laser, we found that the discharge could follow the beam for nearly 60 meters before reaching the tower, meaning that it increased the radius of the protection surface from 120 m to 180 m.”

The data analysis also demonstrates that the LLR, unlike other lasers, works even in difficult weather conditions—such as fog (often found at the summit of Säntis), which can stop the beam—since it literally pierces the clouds. This outcome had previously only been observed in the laboratory. The next step for the consortium will be to increase the height of the laser’s action even further. The long-term objective includes using the LLR to extend a 10 m lightning rod by 500 m.