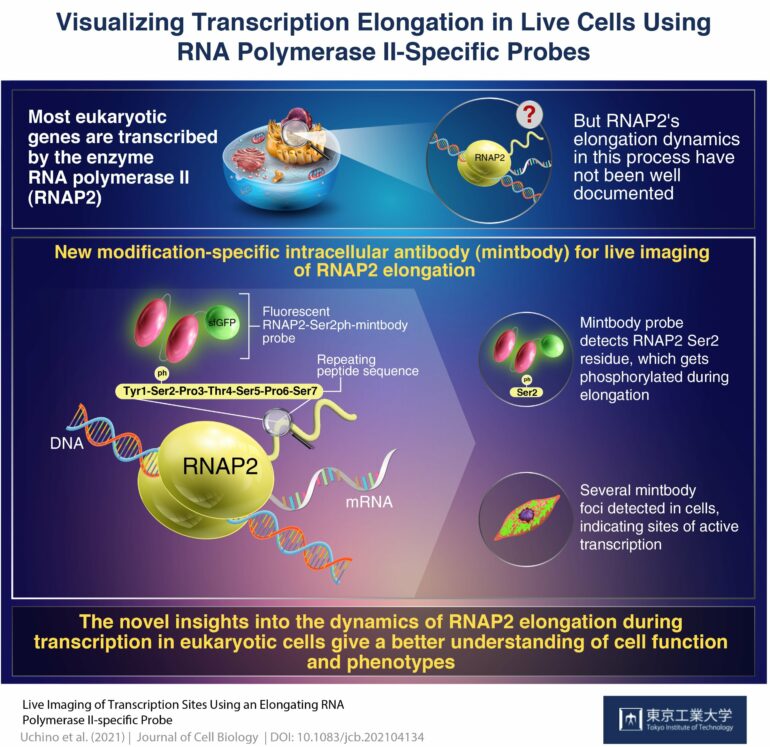 A genetically encoded “live-cell” probe designed by researchers from Tokyo Tech has been able to identify phosphorylated Ser2 in the enzyme RNA polymerase II, subsequently identifying sites of the elongation phase of active transcription in living cells. This probe could be used to specifically image transcription elongation in real time in living animals, furthering gene regulation research by leaps and bounds.

In nuclei of all eukaryotic cells, an enzyme known as RNA polymerase II (RNAP2) is responsible for transcribing nearly all the genes that give us our different characteristics. Therefore, to get a better idea of the entire eukaryotic genome regulation and the functions of various cells, RNAP2 behavior in live cells has been analyzed using fluorescent protein-tagged RNAP2 molecules. While this approach has advanced our knowledge on this protein’s behavior significantly, a cell typically contains more than 100,000 RNAP2 molecules and thousands of active transcription sites or “factories,” and it is very difficult to track single RNAP2 foci when the entire cell lights up like a lightbulb because of the fluorescence!

Recently, a method of live-cell visualization involving the use of fluorescently tagged antigen-binding fragments has yielded localization of specifically modified protein forms. Based on this approach, a group of researchers from Tokyo Institute of Technology and Kyushu University, led by Prof. Hiroshi Kimura, developed a genetically encoded “live-cell” probe to monitor a modified version of RNAP2 that is prevalent in cells during transcription. Their findings have been published in the Journal of Cell Biology.

Prof. Kimura explains their rationale very simply, “In humans, most genes are transcribed by RNAP2, which is a 12-unit complex structure. The largest subunit has a long tail consisting of 52 repeats of seven amino acids. During transcription elongation phase, one of these seven amino acids, Ser2, is phosphorylated. We attempted to detect this Ser2-phosphorylated, active RNAP2 in living cells.”

A genetically encoded probe is more convenient in terms of introducing into cells than protein probes, as the cells keep producing it forever once the genetic material encoding the probe is integrated into the host DNA. Prof. Kimura’s team developed a genetically encoded modification-specific intracellular antibody (conveniently referred to as a “mintbody”) probe, called RNAP2-Ser2ph-mintbody, to detect RNAP2 Ser2 phosphorylation.

The researchers saw that the RNAP2-Ser2ph-mintbody became diminished during cellular mitosis and in the presence of RNAP2 inhibitors. Additionally, they noted that the RNAP2-Ser2ph-mintbody turned up more often in association with other proteins involved in the elongation phase of transcription, rather than those involved in the initiation and termination phases. The RNAP2-Serph2 foci in the cells were relatively more mobile than DNA replication domains, suggesting that loci where transcription elongation is taking place are separate and more mobile than confined chromatin domains.

What does this mean for the future of genetic research? “Understanding the regulation of RNAP2 can help us understand genomes, cell functioning, and phenotypes,” Prof. Kimura elaborates.

Indeed, transcription is the first step to protein production, and localizing sites of active transcription gives us a target to observe the process. Understanding how DNA is read by RNAP2 could provide vital clues about the final outcome of protein synthesis.

The promising results of this study could fuel future research in genetics and gene regulation and widen our knowledge about the human genome.