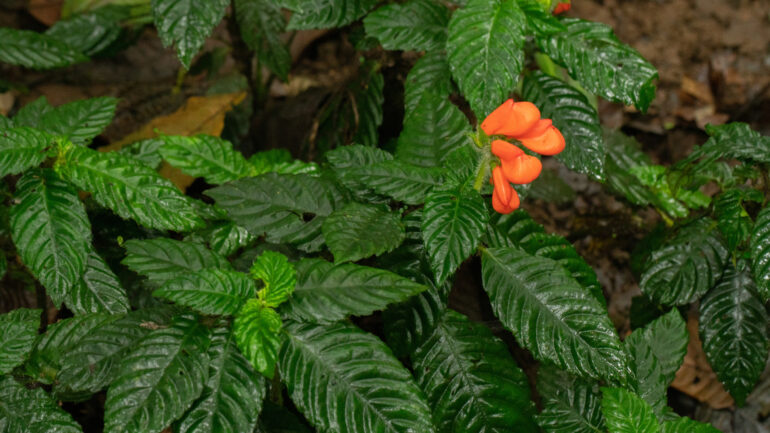 Scientific names get chosen for lots of reasons— they can honor an important person, or hint at what an organism looks like or where it’s from. For a tropical wildflower first described by scientists in 2000, the scientific name “extinctus” was a warning. The orange wildflower had been found 15 years earlier in an Ecuadorian forest that had since been largely destroyed; the scientists who named it suspected that by the time they named it, it was already extinct. But in a new paper in PhytoKeys, researchers report the first confirmed sightings of Gasteranthus extinctus in 40 years.

“Extinctus was given its striking name in light of the extensive deforestation in western Ecuador,” says Dawson White, a postdoctoral researcher at Chicago’s Field Museum and co-lead author of the paper. “But if you claim something’s gone, then no one is really going to go out and look for it anymore. There are still a lot of important species that are still out there, even though overall, we’re in this age of extinction.”

The rediscovered plant is a small forest floor-dweller with flamboyant neon-orange flowers. “The genus name, Gasteranthus, is Greek for ‘belly flower.’ Their flowers have a big pouch on the underside with a little opening top where pollinators can enter and exit,” says White.

G. extinctus is found in the foothills of the Andes mountains, where the land flattens to a plane that was once covered in cloud forest. The region, called the Centinela Ridge, is notorious among biologists for being home to a unique set of plants that vanished when its forests were almost completely destroyed in the 1980s. The late biologist E. O. Wilson even named the phenomenon of organisms instantly going extinct when their small habitat is destroyed “Centinelan extinction.”

The story of Centinela was also an alarm to draw attention to the fact that over 97% of the forests in the western half of Ecuador have been felled and converted to farmland. What remains is a fine mosaic of tiny islands of forest within a sea of bananas and a handful of other crops.

“Centinela is a mythical place for tropical botanists,” says Pitman. “But because it was described by the top people in the field, no one really double-checked the science. No one went back to confirm that the forest was gone and those things were extinct.”

But around the time that Gasteranthus extinctus was first described in 2000, scientists were already showing that some victims of Centinelan extinction weren’t really extinct. Since 2009, a few scientists have mounted expeditions looking for G. extinctus was still around, but they weren’t successful. But when White and Pitman received funding from the Field Museum’s Women’s Board to visit the Centinela Ridge, the team had a chance to check for themselves.

Starting in the summer of 2021, they began combing through satellite images trying to identify primary rainforest that was still intact (which was difficult, White recalls, because most of the images of the region were obscured by clouds). They found a few contenders and assembled a team of ten botanists from six different institutions in Ecuador, the US, and France, including Juan Guevara, Thomas Couvreur, Nicolás Zapata, Xavier Cornejo, and Gonzalo Rivas. In November of 2021, they arrived at Centinela.

“It was my first time planning an expedition where we weren’t sure we’d even enter a forest,” says Pitman. “But as soon as we got on the ground we found remnants of intact cloud forest, and we spotted G. extinctus on the first day, within the first couple hours of searching. We didn’t have a photo to compare it to, we only had images of dried herbarium specimens, a line drawing, and a written description, but we were pretty sure that we’d found it based on its poky little hairs and showy “pot-bellied” flowers.”

Pitman recalls mixed emotions upon the team finding the flower. “We were really excited, but really tentative in our excitement— we thought, ‘Was it really that easy?'” he says. “We knew we needed to check with a specialist.”

The researchers took photos and collected some fallen flowers, not wanting to harm the plants if they were the only ones remaining on Earth. They sent the photos to taxonomic expert John Clark, who confirmed that, yes, the flowers were the not-so-extinct G. extinctus. Thankfully, the team found many more individuals as they visited other forest fragments, and they collected museum specimens to voucher the discovery and leaves for DNA analysis. The team was also able to validate some unidentified photos posted on the community science app iNaturalist as also being G. extinctus.

The plant will keep its name, says Pitman, because biology’s code of nomenclature has very specific rules around renaming an organism, and G. extinctus’s resurrection doesn’t make the cut.

While the flower remains highly endangered, the expedition found plenty of reasons for hope, the researchers say.

“We walked into Centinela thinking it was going to break our heart, and instead we ended up falling in love,” says Pitman. “Finding G. extinctus was great, but what we’re even more excited about is finding some spectacular forest in a place where scientists had feared everything was gone.”

The team is now working with Ecuadorian conservationists to protect some of the remaining fragments where G. extinctus and the rest of the spectacular Centinelan flora lives on. “Rediscovering this flower shows that it’s not too late to turn around even the worst-case biodiversity scenarios, and it shows that there’s value in conserving even the smallest, most degraded areas,” says White. “It’s an important piece of evidence that it’s not too late to be exploring and inventorying plants and animals in the heavily degraded forests of western Ecuador. New species are still being found, and we can still save many things that are on the brink of extinction.”