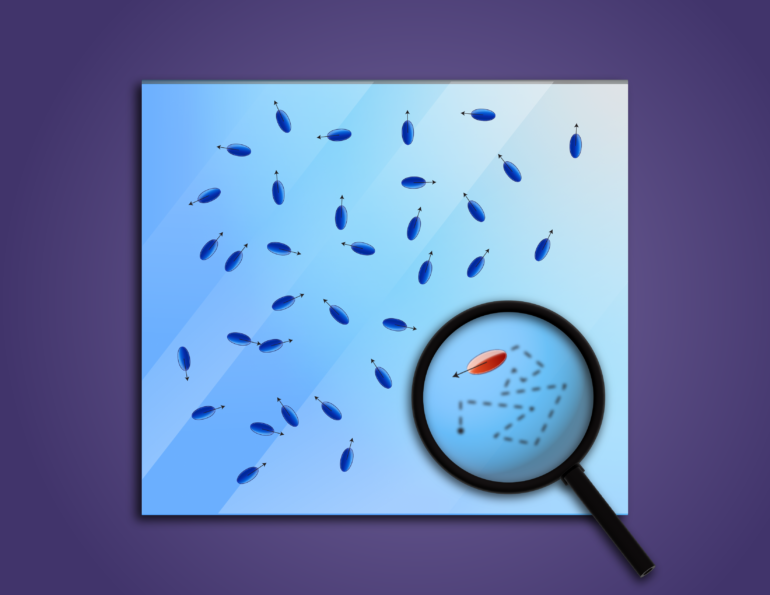 Collective dynamics are ubiquitous in the natural world. From neural circuits to animal groups, there are countless instances in which the interactions among large numbers of elementary units bestow surprisingly complex patterns of tantalizing beauty on the collective. One of the longstanding goals of researchers in many fields is to understand behaviors of a large group of individual units by monitoring the actions of a single unit. For example, an ornithologist can learn many things about the behaviors of a flock by monitoring only a single bird.

Of greater difficulty is understanding the size of a collection of units by observing a single unit. No matter how many birds one tags with monitoring equipment, one can never be assured of having tagged the entire flock. Yet, while the ability to calculate the size of a collective from individual behaviors would be a key tool for any field, there are only a handful of recent papers trying to tackle the seemingly unsolvable problem.

In a newly published study appearing in Communications Physics, investigators led by Maurizio Porfiri, Institute Professor of Mechanical and Aerospace Engineering and Biomedical Engineering, and a member of the Center for Urban Science and Progress (CUSP) at the NYU Tandon School of Engineering; and Pietro De Lellis of the University of Naples, Italy, offer a paradigm to solve this problem, one that builds upon precepts that can be traced back to the work of Einstein.

By observing a system of self-propelled Vicsek particles—a mathematical conceptualization of motion and swarming of particles—as a universal model for collective dynamics, they show that the time rate of growth of the mean square heading of any particle is sufficient to predict the number of particles in the system under particular parameters, such as a known and constant temperature.

Broadly, the study provides a rigorous, mathematically backed method to infer the size of a realistic collective from measurements of some of its units, whose random motion contains the footprints of the entire system. The theoretical underpinnings of the method provide further evidence for the analogies identified by Einstein between interdisciplinary research in the collective behavior of animal groups and modern physics. Future work in this vein may study real collectives, from insect swarms to bird flocks, fish schools, and human crowds.


Citation:
Inferring the size of a collective of self-propelled Vicsek particles from the random motion of a single unit (2022, April 12)