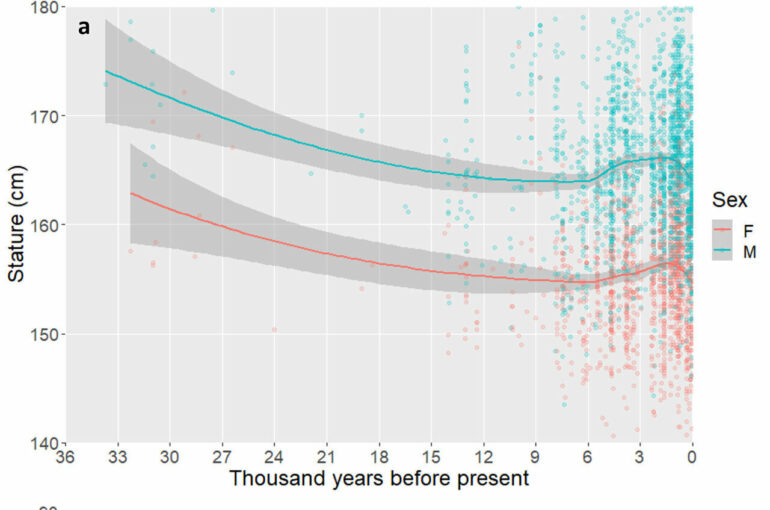 A new study led by Western biological anthropology professor Jay Stock, suggests that milk consumption in some regions between 7,000 and 2,000 years ago led to an increase in human body mass and stature. This ran counter to trends in body size experienced elsewhere in the world. This size increase is found in regions where there was evolution for higher frequencies of genes that allow humans to produce enzymes to digest milk into adulthood—called lactase persistence.

The study, involving a team of 16 researchers, compared the stature and body mass of 3,507 skeletons from 366 different archaeological sites, ranging across 25,000 years, creating a large comparative data set to examine human body variation over time and geographic location. The study was published today in PNAS.

Between 15,000 and 10,000 years ago, humans throughout Eurasia and Northeast Africa experienced a reduction in physical stature and body mass. Farming developed in different regions independently and migrating farmers brought crops and dairy animals with them to parts of Eurasia occupied by hunter-gatherers.

In some regions, including central and northern Europe, crops that had been domesticated in western Asia did not thrive, and humans shifted from producing cheese and yogurt, which have lower proportions of lactose sugar, to the direct consumption of raw milk which has much higher levels of lactose.

The ability to digest higher quantities of lactose led to greater energy availability from dairy products. In regions where there is genetic evidence for increased milk consumption, there are also increases in body stature and mass, as reflected in the skeletal record. The legacy of ancient milk consumption is still evident today, through different frequencies of lactose intolerance in populations.

“That process of evolution led to the pattern of lactose intolerance that we see today, where people in the north of Europe are more frequently lactose tolerant than people in the south of Europe,” said Stock.

Stock said dairy products are an important component of diets in many parts of the world. Higher frequencies of lactose tolerance that evolved in regions of Africa and Asia are examples of convergent evolution, meaning the lactose tolerance in these populations evolved separately from the European population.

“Milk drinking has been culturally important in different continents, and we see the genetic legacy of that today. There are high frequencies of lactase persistence genes in populations in western Africa, the Rift Valley, and the horn of Africa, as well as some parts of Arabia and Mongolia,” he said.

“I think the same mechanisms are likely driving some human size variation within Africa, for instance, Maasai herders of eastern Africa are characteristically tall and have a rich cultural history of drinking milk. Unfortunately, we don’t currently have the data to test that yet.”

The data set used in this study is primarily based on European samples, which Stock said is due largely to historically more frequent archaeological exploration within the continent.

“Archaeologists have dug more sites within Europe and more research on European skeletons has been conducted the past century,” said Stock.

Study explores the promises and pitfalls of evolutionary genomics

While it has long been argued that a decrease in body size followed the development of agriculture, there is evidence people were getting smaller before they adopted agriculture, and the pattern continued afterward. Stock said the decrease in stature occurred following the Last Glacial Maximum when the global environment was quite a bit cooler and likely less productive. This could have led to increased environmental pressures and a decrease in the variety of foods available due to the adoption of agriculture. This also led to a more abundant and stable food source.

“What we can see from these results is that there are variable outcomes of the adoption of agriculture in different parts of the world that led to different impacts on our health and our biology,” said Stock. “Global variations in body size are partly reflective of these impacts.”