The mechanism of cosmic magnetic fields explored in the laboratory 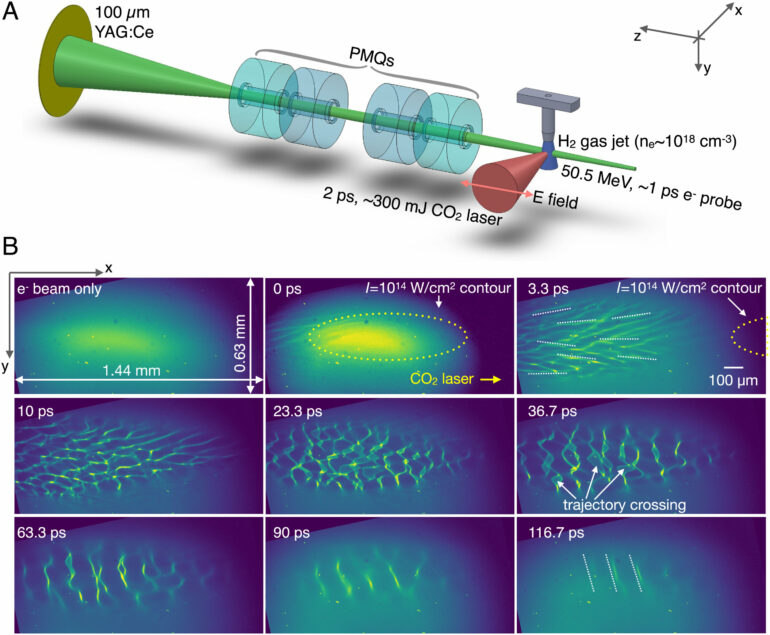 Plasma is matter that is so hot that the electrons are separated from atoms. The electrons float freely and the atoms become ions. This creates an ionized gas—plasma—that makes up nearly all of the visible universe. Recent research shows that magnetic fields can spontaneously emerge in a plasma. This can happen if the plasma has a temperature anisotropy—temperature that is different along different spatial directions.

This mechanism is known as the Weibel instability. It was predicted by plasma theorist Eric Weibel more than six decades ago but only now has been unambiguously observed in the laboratory. New research, now published in Proceedings of the National Academy of Sciences, finds that this process can convert a significant fraction of the energy stored in the temperature anisotropy into magnetic field energy. It also finds that the Weibel instability could be a source of magnetic fields that permeate throughout the cosmos.

This new work offers a possible solution to this vexing problem of the origin of the microgauss level seed magnetic fields. The research used a novel platform that has great potential for studying the ultrafast dynamics of magnetic fields in the laboratory plasmas that are relevant to astro- and high-energy density physics.

First theorized six decades ago, the Weibel instability driven by temperature anisotropy is thought to be an important mechanism for self-magnetization of many laboratory and astrophysical plasmas. However, scientists have faced two challenges in unambiguously demonstrating the Weibel instability. First, until recently, researchers were not able to generate a plasma with a known temperature anisotropy as initially envisioned by Weibel. Second, researchers had no suitable technique to measure the complex and rapidly evolving topology of the magnetic fields subsequently generated in the plasma.

This work, enabled by the unique capability of the Accelerator Test Facility, a Department of Energy (DOE) user facility at Brookhaven National Laboratory, employed a novel experimental platform that allowed the researchers to create a hydrogen plasma with a known highly anisotropic electron velocity distributions on a tens of trillionth of a second timescale by using an ultrashort but intense carbon dioxide laser pulse.