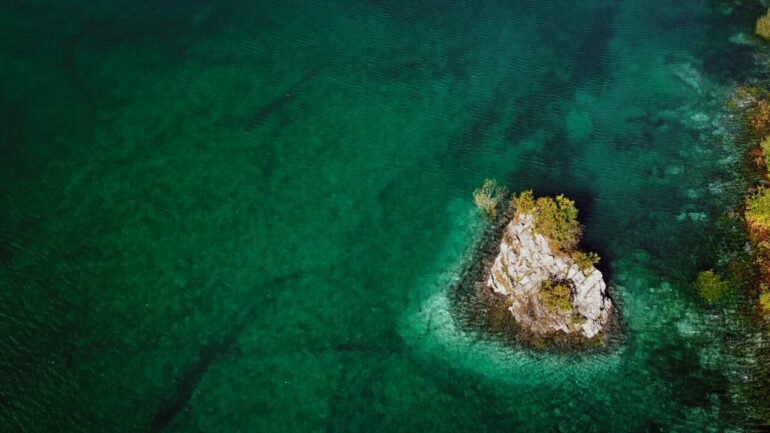 Reducing levels of the nutrient phosphorus to control harmful algal blooms in places like Lake Erie is actually advantageous to toxic cyanobacteria strains, which can lead to an increase in toxins in the water, according to a new modeling study.

Researchers from Technische Universität Berlin (TU Berlin) detail their findings in a paper published online May 26 in the interdisciplinary journal Science. Two University of Michigan scientists are among the co-authors.

“The big advance here was to integrate our understanding of the microbiology of the blooms into predictive models,” said U-M environmental microbiologist and study co-author Gregory Dick. “The results suggest that biologically informed models are able to reproduce emergent properties of blooms that are not predicted by traditional models.”

Cyanobacteria, also known as blue-green algae, can produce toxins and deplete lakes of oxygen when they die. Phosphorus is an important nutrient for these algae, and efforts are underway worldwide to reduce phosphorus levels and inhibit the growth of cyanobacteria.

However, as the total number of cyanobacteria decreases, the remaining cyanobacteria have more of another important nutrient available: nitrogen. And higher concentrations of nitrogen help certain cyanobacteria to produce a toxin that protects them against damage resulting from oxidation.

Using an agent-based model, the researchers simulated how cyanobacteria behave in Lake Erie. They call for a shift in thinking about water management and adoption of an approach that not only reduces phosphorus, but also nitrogen loading in bodies of water.

Cyanobacteria can be dangerous for both pets and people. In August 2014, nearly half a million people in the Toledo area were without tap water for nearly three days due to contaminated drinking water. A type of blue-green algae, Microcystis, had produced particularly high levels of the liver toxin microcystin (MC) in Lake Erie.

“While microcystin is a strong toxin for humans and animals, it’s highly beneficial for cyanobacteria,” said Ferdi Hellweger, chair of Water Quality Engineering at TU Berlin’s Institute of Environmental Technology and lead author of the Science paper.

Microcystin can occupy certain sites on the enzymes important for life processes in the bacteria. In doing so, it shields the bacteria from aggressive hydrogen peroxide, which could otherwise attack these binding sites, oxidize the enzymes, and render them useless.

“Hydrogen peroxide is found everywhere in nature, including as a by-product of photosynthesis,” Hellweger said. As such, producing microcystin is an important protective mechanism for the bacteria. Yet, there are some bacteria strains that produce a lot of microcystin, and others that produce very little or none at all.

“This diversity among bacterial strains is precisely what is responsible for the phenomenon that a reduction in phosphorus can lead to an increase in MC production,” said Hellweger.

Because phosphorus is a nutrient that is only available to a limited extent in nature for the bacteria, efforts until now have previously focused on cutting down on the use of phosphates as fertilizers in agriculture and reducing the phosphorus content of wastewater by means of tertiary treatment of wastewater to slow down the growth of blue-green algae, even in larger bodies of water such as Lake Erie.

The U.S. and Canada have committed to reducing the amount of phosphorus entering Lake Erie by 40%.

“Less phosphorus in the water reduces the number of blue-green algae and thus also the toxin level. That was generally the rule of thumb for water management,” Hellweger said. However, the actual natural processes are more complex than this, he said.

“Less blue-green algae means they also have to compete less for the other nutrients, the most important of which is nitrogen. And nitrogen, similar to phosphorus, is also only available in limited amounts. And, as it happens, it is an important element of the MC molecule,” Hellweger said.

In other words: Those strains of bacteria that produce considerable amounts of microcystin can now do so more easily because microcystin also protects them from the harmful hydrogen peroxide.

“This study supports the idea that phosphorus reduction will successfully reduce the overall abundance of cyanobacteria, consistent with the goals of current policies,” said U-M’s Dick, a professor in the Department of Earth and Environmental Sciences and director of the Cooperative Institute for Great Lakes Research in the School for Environment and Sustainability.

“However, it also suggests that reducing phosphorus will cause an increase in abundance of the subset of cyanobacteria that are able to produce toxin, resulting in more toxin overall,” Dick said.

The other U-M co-author is Derek Smith, who received a doctorate from U-M’s Department of Earth and Environmental Sciences and was a postdoctoral researcher in Dick’s lab. U-M researchers took field measurements at Toledo’s drinking water intake in Lake Erie, then used environmental genomic techniques to quantify the proportion of toxin-producing and non-toxin-producing Microcystis cells in the Lake Erie blooms.

“Previous experiments have suggested that managing harmful cyanobacteria blooms requires reduction of both phosphorus and nitrogen pollution in lakes. Now, a model based on the current knowledge of toxic cyanobacteria biology suggests the same,” Smith said.

In the new modeling study, the researchers for the first time used agent-based simulation to illustrate this blue-green algae’s behavior. Each blue-green alga is represented on the computer as an individual, behaving slightly differently depending on its assumed life history.

A blue-green alga that was frequently at the water surface, for example, will have been particularly exposed to sunlight and thus hydrogen peroxide. This increases the likelihood that it will make full use of its microcystin production capacities.

Sunlight can also activate the gene needed to produce microcystin. This mechanism contributes to the fact that less biomass leads to more toxins because more light can penetrate to greater depths and stimulate production.

The researchers used the blue-green alga Microcystis and Lake Erie as the model organism and environment for their simulation. To precisely model the processes there, they conducted an extensive literature search and evaluated 103 studies with 708 experiments dating back to 1958.

Scientists at the University of Tennessee in Knoxville also conducted their own laboratory experiments to assist with building the model.