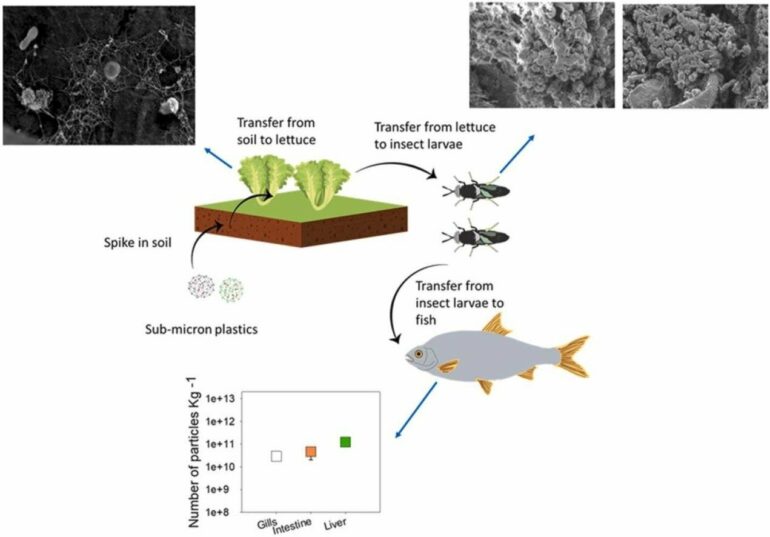 A new study from the University of Eastern Finland shows that lettuce can take up nanoplastics from the soil and transfer them into the food chain. The paper is published in Nano Today.

The concern about plastic pollution has become widespread after it was realized that mismanaged plastics in the environment break down into smaller pieces known as microplastics and nanoplastics. It is likely that nanoplastics, due to their small size, can pass through physiological barriers and enter organisms.

Despite the growing body of evidence on the potential toxicity of nanoplastics to plants, invertebrates and vertebrates, our understanding of plastic transfer in food webs is limited. For instance, little is known about nanoplastics in soil ecosystems and their uptake by soil organisms, despite the fact that agricultural soil is potentially receiving nanoplastics from different sources such as atmospheric deposition, irrigation with wastewater, application of sewage sludge for agricultural purposes, and use of mulching film. Measurement of uptake of nanoplastics from the soil by plants, particularly vegetables and fruit in agricultural soils, is thus a critical step to reveal whether and to what extent nanoplastics can make their way into edible plants and, consequently, into food webs.

Researchers at the University of Eastern Finland have developed a novel, metallic fingerprint-based technique to detect and measure nanoplastics in organisms and, in this new study, they applied it to a model food chain consisting of three trophic levels, i.e., lettuce as a primary producer, black soldier fly larvae as a primary consumer, and the insectivorous fish (roach) as a secondary consumer. The researchers used commonly found plastic waste in the environment, including polystyrene (PS) and polyvinyl chloride (PVC) nanoplastics.

Lettuce plants were exposed to nanoplastics for 14 days via contaminated soil, after which they were harvested and fed to insects (black soldier fly larvae, which are used as a source of proteins in many countries). After five days of feeding with lettuce, the insects were fed to the fish for five days.

Using scanning electron microscopy, the researchers analyzed the dissected plants, larvae and fish. The images showed that nanoplastics were taken up by the roots of the plants and accumulate in the leaves. Then, nanoplastics were transferred from the contaminated lettuce to the insects. The imaging of the digestive system of the insects showed that both PS and PVC nanoplastics were present in the mouth and in the gut even after allowing them to empty their guts for 24 hours. The number of PS nanoplastics in the insects was significantly lower than the number of PVC nanoplastics, which is consistent with the lower number of PS particles in the lettuce. When the fish fed on the contaminated insects, particles were detected in the gills, liver and intestine tissues of the fish, whereas no particles were found in the brain tissue.

“Our results show that lettuce can take up nanoplastics from the soil and transfer them into the food chain. This indicates that the presence of tiny plastic particles in soil could be associated with a potential health risk to herbivores and humans if these findings are found to be generalizable to other plants and crops and to field settings. However, further research into the topic is still urgently needed,” lead author, Dr. Fazel Monikh of the University of Eastern Finland concludes.

Light it up: Using firefly genes to understand cannabis biology

Provided by
University of Eastern Finland


Citation:
Nanoplastics can move up the food chain from plants to insects and from insects to fish (2022, September 12)