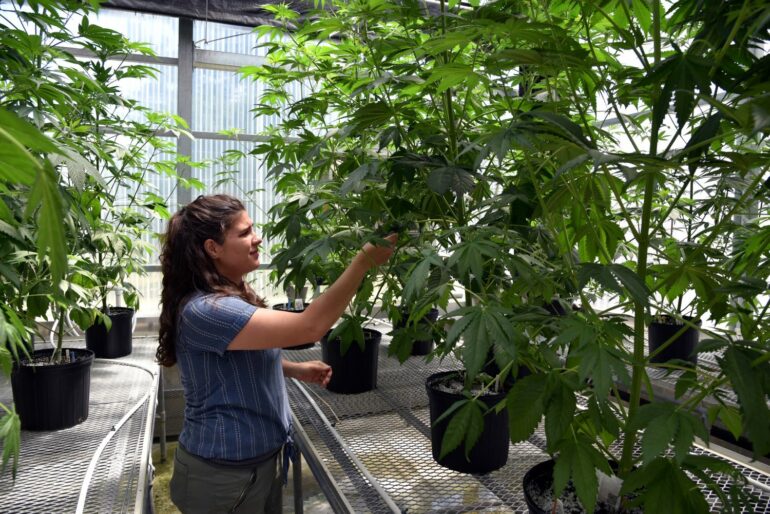 A novel method for making new cannabis plants works as well as traditional methods in less space according to a recent UConn study published in HortScience.

The new method known as “retipping” takes cuttings from strong, disease-free “mother” plants that were micropropogated in laboratory-controlled settings.

“Retipping has the potential to produce nine-times as many plants in a similar amount of floor space as stem cuttings from traditional stock mother plants,” says Jessica Lubell-Brand, Ph.D., professor of horticulture at UConn’s College of Agriculture, Health and Natural Resources and principal investigator on the project. “This method could help cultivation facilities grow more in less space while maintaining the quality of their final product.”

The research team, which also included doctoral student Lauren Kurtz, studied the growth of plants in a greenhouse to determine if there were differences between three methods: microcuttings, stem cuttings, and retip cuttings.

The findings suggest that all three methods of making new plants grew to a similar size and had the same chemical profile. The end product, which in this case is the cannabis flowers, did not differ between the three methods either.

While the yields were similar, retipping required the least propagation space and would potentially allow cultivators to grow more starter plants in their facilities.

The micropropogated mother plants used in this study were grown in a laboratory and produce identical plants that are disease free and vigorous. They are grown in small containers under sterile conditions, taking up less space than conventional growing.

By using recently micropropogated mothers for the new method called retipping, the researchers harvest cuttings from plants that have been acclimated to conditions outside of the lab. Retipping can enhance output from the micropropagation process by using the plants as mothers instead of and in addition to using them as production plants to grow flowers.

“Not every cultivation facility has the means to build a laboratory and grow micropropagated plants,” says Lubell-Brand. “However, there are plant nurseries with laboratories that can step in to provide them, especially as more cannabis cultivation becomes legal in more states. This supply chain strategy is commonly used in the ornamental nursery trade.”

The research team explains that while decades-long prohibition of cannabis is coming to an end around the country, there is still a lot to learn.

“The legal cannabis industry is forging ahead of the science,” says Kurtz. “Our lab is helping to bridge the gap and provide evidence-based strategies to improve cultivation.”