A new way to assess radiation damage in reactors 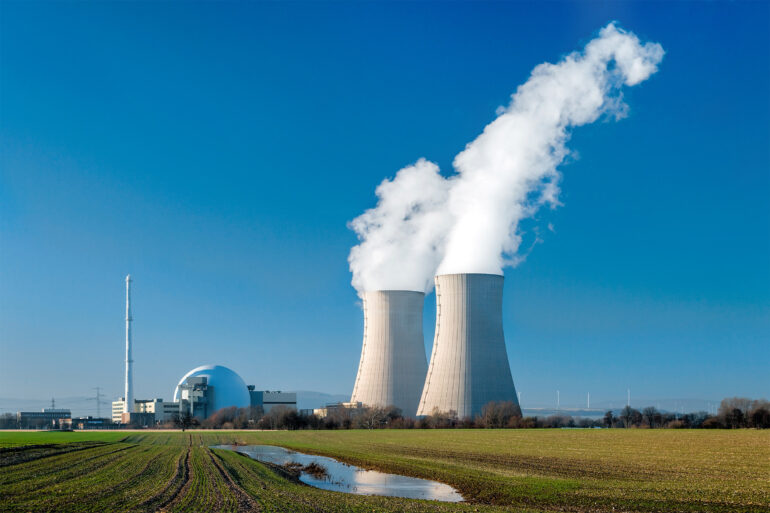 A new method could greatly reduce the time and expense needed for certain important safety checks in nuclear power reactors. The approach could save money and increase total power output in the short run, and it might increase plants’ safe operating lifetimes in the long run.

One of the most effective ways to control greenhouse gas emissions, many analysts argue, is to prolong the lifetimes of existing nuclear power plants. But extending these plants beyond their originally permitted operating lifetimes requires monitoring the condition of many of their critical components to ensure that damage from heat and radiation has not led, and will not lead, to unsafe cracking or embrittlement.

Today, testing of a reactor’s stainless steel components—which make up much of the plumbing systems that prevent heat buildup, as well as many other parts—requires removing test pieces, known as coupons, of the same kind of steel that are left adjacent to the actual components so they experience the same conditions. Or, it requires the removal of a tiny piece of the actual operating component. Both approaches are done during costly shutdowns of the reactor, prolonging these scheduled outages and costing millions of dollars per day.

Now, researchers at MIT and elsewhere have come up with a new, inexpensive, hands-off test that can produce similar information about the condition of these reactor components, with far less time required during a shutdown. The findings are reported today in the journal Acta Materiala in a paper by MIT professor of nuclear science and engineering Michael Short; Saleem Al Dajani ’19 SM ’20, who did his master’s work at MIT on this project and is now a doctoral student at the King Abdullah University of Science and Technology (KAUST) in Saudi Arabia; and 13 others at MIT and other institutions.

The test involves aiming laser beams at the stainless steel material, which generates surface acoustic waves (SAWs) on the surface. Another set of laser beams is then used to detect and measure the frequencies of these SAWs. Tests on material aged identically to nuclear power plants showed that the waves produced a distinctive double-peaked spectral signature when the material was degraded.

Short and Al Dajani embarked on the process in 2018, looking for a more rapid way to detect a specific kind of degradation, called spinodal decomposition, that can take place in austenitic stainless steel, which is used for components such as the two- to three-foot wide pipes that carry coolant water to and from the reactor core. This process can lead to embrittlement, cracking, and potential failure in the event of an emergency.

While spinodal decomposition is not the only type of degradation that can occur in reactor components, it is a primary concern for the lifetime and sustainability of nuclear reactors, Short says.

“We were looking for a signal that can link material embrittlement with properties we can measure, that can be used to estimate lifetimes of structural materials,” Al Dajani says.

They decided to try a technique Short and his students and collaborators had expanded upon, called transient grating spectroscopy, or TGS, on samples of reactor materials known to have experienced spinodal decomposition as a result of their reactor-like thermal aging history. The method uses laser beams to stimulate, and then measure, SAWs on a material. The idea was that the decomposition should slow down the rate of heat flow through the material, that slowdown would be detectable by the TGS method.

However, it turns out there was no such slowdown. “We went in with a hypothesis about what we would see, and we were wrong,” Short says.

That’s often the way things work out in science, he says. “You go in guns blazing, looking for a certain thing, for a great reason, and you turn out to be wrong. But if you look carefully, you find other patterns in the data that reveal what nature actually has to say.”

Instead, what showed up in the data was that, while a material would usually produce a single frequency peak for the material’s SAWs, in the degraded samples there was a splitting into two peaks.

“It was a very clear pattern in the data,” Short recalls. “We just didn’t expect it, but it was right there screaming at us in the measurements.”

Cast austenitic stainless steels like those used in reactor components are what’s known as duplex steels, actually a mixture of two different crystal structures in the same material by design. But while one of the two types is quite impervious to spinodal decomposition, the other is quite vulnerable to it. When the material starts to degrade, the difference shows up in the different frequency responses of the material, which is what the team found in their data.

That finding was a total surprise, though. “Some of my current and former students didn’t believe it was happening,” Short says. “We were unable to convince our own team this was happening, with the initial statistics we had.” So, they went back and carried out further tests, which continued to strengthen the significance of the results. They reached a point where the confidence level was 99.9% that spinodal decomposition was indeed coincident with the wave peak separation.

“Our discussions with those who opposed our initial hypotheses ended up taking our work to the next level,” Al Dajani says.

The tests they did used large lab-based lasers and optical systems, so the next step, which the researchers are hard at work on, is miniaturizing the whole system into something that can be an easily portable test kit to use to check reactor components on-site, reducing the length of shutdowns. “We’re making great strides, but we still have some way to go,” he says.

But when they achieve that next step, he says, it could make a significant difference. “Every day that your nuclear plant goes down, for a typical gigawatt-scale reactor, you lose about $2 million a day in lost electricity,” Al Dajani says, “so shortening outages is a huge thing in the industry right now.”

He adds that the team’s goal was to find ways to enable existing plants to operate longer: “Let them be down for less time and be as safe or safer than they are right now—not cutting corners, but using smart science to get us the same information with far less effort.” And that’s what this new technique seems to offer.

Short hopes that this could help to enable the extension of power plant operating licenses for some additional decades without compromising safety, by enabling frequent, simple and inexpensive testing of the key components. Existing, large-scale plants “generate just shy of a billion dollars in carbon-free electricity per plant each year,” he says, whereas bringing a new plant online can take more than a decade. “To bridge that gap, keeping our current nukes online is the single biggest thing we can do to fight climate change.”