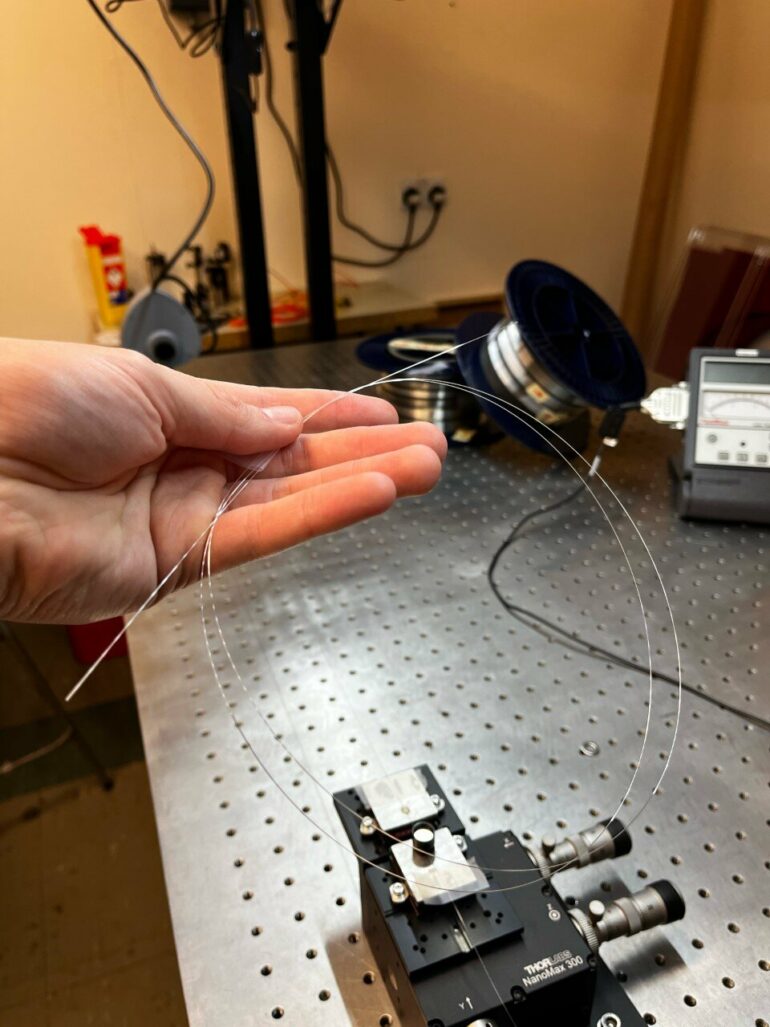 Optical fibers are the backbone of our modern information networks. From long-range communication over the internet to high-speed information transfer within data centers and stock exchanges, optical fiber remains critical in our globalized world.

Fiber networks are not, however, structurally perfect, and information transfer can be compromised when things go wrong. To address this problem, physicists at the University of Bath in the UK have developed a new kind of fiber designed to enhance the robustness of networks. This robustness could prove to be especially important in the coming age of quantum networks.

The team has fabricated optical fibers (the flexible glass channels through which information is sent) that can protect light (the medium through which data is transmitted) using the mathematics of topology. Best of all, these modified fibers are easily scalable, meaning the structure of each fiber can be preserved over thousands of kilometers.

The Bath study is published in the latest issue of Science Advances.

At its simplest, optical fiber, which typically has a diameter of 125 µm (similar to a thick strand of hair) comprises a core of solid glass surrounded by cladding. Light travels through the core, where it bounces along as though reflecting off a mirror.

However, the pathway taken by an optical fiber as it crisscrosses the landscape is rarely straight and undisturbed: turns, loops, and bends are the norm. Distortions in the fiber can cause information to degrade as it moves between sender and receiver. “The challenge was to build a network that takes robustness into account,” said Physics Ph.D. student Nathan Roberts, who led the research.

“Whenever you fabricate a fiber-optic cable, small variations in the physical structure of the fiber are inevitably present. When deployed in a network, the fiber can also get twisted and bent. One way to counter these variations and defects is to ensure the fiber design process includes a real focus on robustness. This is where we found the ideas of topology useful.”

To design this new fiber, the Bath team used topology, which is the mathematical study of quantities that remain unchanged despite continuous distortions to the geometry. Its principles are already applied to many areas of physics research. By connecting physical phenomena to unchanging numbers, the destructive effects of a disordered environment can be avoided.

The fiber designed by the Bath team deploys topological ideas by including several light-guiding cores in a fiber, linked together in a spiral. Light can hop between these cores but becomes trapped within the edge thanks to the topological design. These edge states are protected against disorder in the structure.

Bath physicist Dr. Anton Souslov, who co-authored the study as theory lead, said, “Using our fiber, light is less influenced by environmental disorder than it would be in an equivalent system lacking topological design.

“By adopting optical fibers with topological design, researchers will have the tools to pre-empt and forestall signal-degrading effects by building inherently robust photonic systems.”

Bath physicist Dr. Peter Mosley, who co-authored the study as experimental lead, said, “Previously, scientists have applied the complex mathematics of topology to light, but here at the University of Bath we have lots of experience physically making optical fibers, so we put the mathematics together with our expertise to create topological fiber.”

The team, which also includes Ph.D. student Guido Baardink and Dr. Josh Nunn from the Department of Physics, are now looking for industry partners to develop their concept further.

“We are really keen to help people build robust communication networks and we are ready for the next phase of this work,” said Dr. Souslov.

Mr. Roberts added, “We have shown that you can make kilometers of topological fiber wound around a spool. We envision a quantum internet where information will be transmitted robustly across continents using topological principles.”

He also pointed out that this research has implications that go beyond communications networks. He said, “Fiber development is not only a technological challenge, but also an exciting scientific field in its own right.

“Understanding how to engineer optical fiber has led to light sources from bright ‘supercontinuum’ that spans the entire visible spectrum right down to quantum light sources that produce individual photons—single particles of light.”

The future is quantum

Quantum networks are widely expected to play an important technological role in years to come. Quantum technologies have the capacity to store and process information in more powerful ways than ‘classical’ computers can today, as well as sending messages securely across global networks without any chance of eavesdropping.

But the quantum states of light that transmit information are easily impacted by their environment and finding a way to protect them is a major challenge. This work may be a step towards maintaining quantum information in fiber optics using topological design.

Provided by
University of Bath


Citation:
The optical fiber that keeps data safe even after being twisted or bent (2023, January 10)