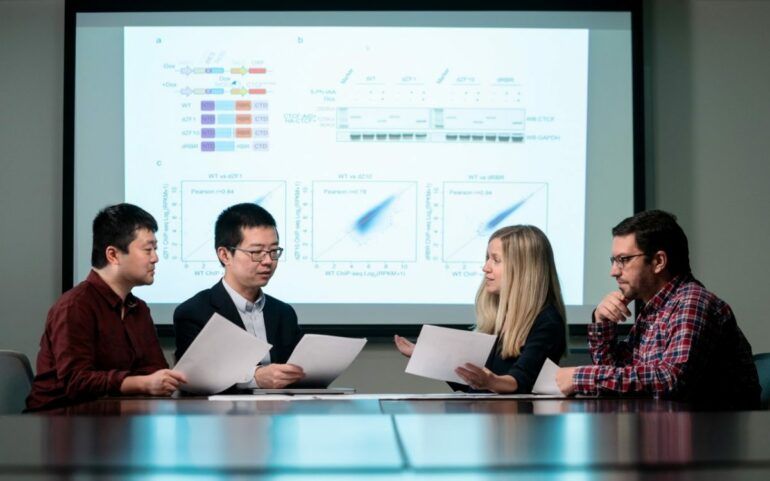 CTCF is a critical protein known to play various roles in key biological processes such as transcription. Scientists at St. Jude Children’s Research Hospital have used a next-generation protein degradation technology to study CTCF. Their work revealed the superiority of the approach in addition to providing functional insights into how CTCF regulates transcription. The study, published today in Genome Biology, paves the way for more clear, nuanced studies of CTCF.

Transcription is an essential biological process where DNA is copied into RNA. The process is the first required step in a cell to take the instructions housed in DNA and ultimately translate that code into the amino acid or polypeptide building blocks that become active proteins. Dysregulated transcription plays a role in many types of pediatric cancer. Finding ways to modify or target aspects of the transcriptional machinery is a novel frontier in the search for vulnerabilities that can be exploited therapeutically.

While the biology of CTCF has been extensively studied, how the different domains (parts) of CTCF function in relation to transcription regulation remains unclear.

One of the most valuable ways to study a protein is to degrade (remove) it from a model system. In the protein’s absence, researchers can study the functional changes that occur, providing insight into how the protein influences a cell. One system for degrading proteins is the auxin-inducible degron 1 (AID1) system. However, this system places limitations on accurate investigation of the function of CTCF, such as the high dosage dependency of auxin, which causes cellular toxicity that muddles results.

Scientists at St. Jude applied the second-generation system, auxin-inducible degron 2 (AID2) to CTCF (the system was developed by Masato Kanemaki, Ph.D., at the National Institute of Genetics). This system is superior for loss-of-function studies, overcoming the limitations of the AID1 system and eliminating the off-target effects seen with previous approaches.

“When the CTCF protein is gone, we and others have observed that very few genes transcriptionally change,” Li said. “We know when we remove most of the CTCF protein in cells, the impact on transcription is minimal. So, the disconnect between the depletion of protein and transcription must be following a mechanism. We identified part of the mechanism. The protein not only relies on binding to the DNA through the recognition of the CTCF DNA binding motif, but also relies on certain domains to bind to specific sequences flanking the motif. For a subset of genes, transcription is regulated only when CTCF binds to these specific sequences.”

The researchers combined the AID2 system with leading-edge techniques such as SLAM-seq and sgRNA screening to study how the degradation of CTCF alters transcription.

“With degradation we can create a very clean background, and then introduce a mutant. This switch happens very fast, so we call it a fast-swapping system,” Li said. “This is the first time a clean and fast-swapping system has been used to study individual mutants of CTCF.”

Through their work the scientists identified the zinc finger (ZF) domain as the region within CTCF with the most functional relevance, including ZF1 and ZF10. Removing ZF1 and ZF10 from the model system revealed genomic regions that independently require these ZFs for binding DNA and regulating transcription.

“CTCF itself is a multifunctional protein,” said co-first author Judith Hyle, St. Jude Department of Tumor Cell Biology. “It has various roles in a cell from chromatin architecture maintenance to transcription regulation, either as an activator or repressor of transcription. Our interest is how CTCF is involved in transcriptional regulation, and with this new system we were able to degrade CTCF much more rapidly, and home in on the specific targets of CTCF. We were able to assign some function to these peripheral zinc fingers that have not been well understood, showing that certain regions within the genome required or were dependent upon these zinc finger bindings for transcriptional regulation. That was the first time that had been seen or confirmed in a cellular system.”

An open door for further research

The superior system allowed the researchers to introduce mutations that could be tracked through their model. Scientists then conducted functional studies to understand the consequences of such mutations regarding CTCF binding and transcriptional regulation.

Speaking about the new approach, co-first author Mohamed Nadhir Djekidel, Ph.D., St. Jude Center for Applied Bioinformatics, said, “Because you can get clean data about the mutants when endogenous protein is degraded, you can actually infer the gene regulatory network, and that opens the door for different downstream analysis to understand how regulation works.”

The study demonstrates the superiority of the AID2 system for degrading proteins and showcases the importance of studying CTCF in a clear system. This is important verification for other researchers in the field of transcriptional regulation research. The work has also revealed new avenues for research on this key protein.