No ‘second law of entanglement’ after all, claims study 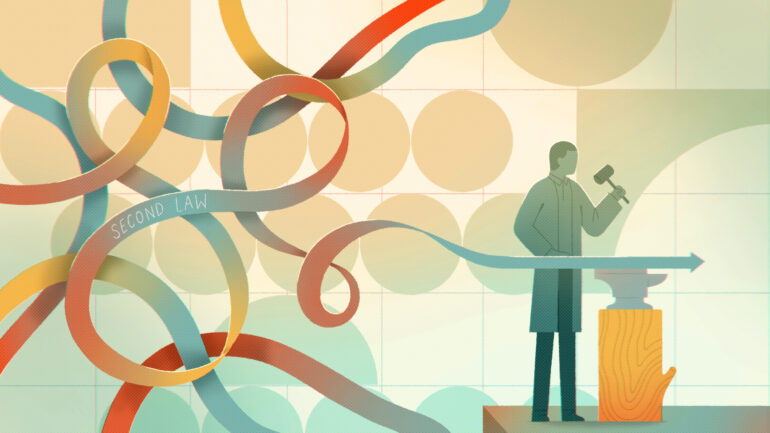 The second law of thermodynamics is often considered to be one of only a few physical laws that is absolutely and unquestionably true. The law states that the amount of ‘entropy’—a physical property—of any closed system can never decrease. It adds an ‘arrow of time’ to everyday occurrences, determining which processes are reversible and which are not. It explains why an ice cube placed on a hot stove will always melt, and why compressed gas will always fly out of its container (and never back in) when a valve is opened to the atmosphere.

Only states of equal entropy and energy can be reversibly converted from one to the other. This reversibility condition led to the discovery of thermodynamic processes such as the (idealized) Carnot cycle, which poses an upper limit to how efficiently one can convert heat into work, or the other way around, by cycling a closed system through different temperatures and pressures. Our understanding of this process underpinned the rapid economic development during the Western Industrial Revolution.

The beauty of the second law of thermodynamics is its applicability to any macroscopic system, regardless of the microscopic details. In quantum systems, one of these details may be entanglement: a quantum connection that makes separated components of the system share properties. Intriguingly, quantum entanglement shares many profound similarities with thermodynamics, even though quantum systems are mostly studied in the microscopic regime.

Scientists have uncovered a notion of ‘entanglement entropy’ that precisely mimics the role of the thermodynamical entropy, at least for idealized quantum systems that are perfectly isolated from their surroundings.

“Quantum entanglement is a key resource that underlies much of the power of future quantum computers. To make effective use of it, we need to learn how to manipulate it,” says quantum information researcher Ludovico Lami. A fundamental question became whether entanglement can always be reversibly manipulated, in direct analogy to the Carnot cycle. Crucially, this reversibility would need to hold, at least in theory, even for noisy (‘mixed’) quantum systems that have not been kept perfectly isolated from their environment.

It was conjectured that a ‘second law of entanglement’ could be established, embodied in a single function that would generalize the entanglement entropy and govern all entanglement manipulation protocols. This conjecture featured in a famous list of open problems in quantum information theory.

No second law of entanglement

Resolving this long-standing open question, research carried out by Lami (previously at University of Ulm and currently at QuSoft and the University of Amsterdam) and Bartosz Regula (University of Tokyo) demonstrates that manipulation of entanglement is fundamentally irreversible, putting to rest any hopes of establishing a second law of entanglement.

This new result relies on the construction of a particular quantum state which is very ‘expensive’ to create using pure entanglement. Creating this state will always result in a loss of some of this entanglement, as the invested entanglement cannot be fully recovered. As a result, it is inherently impossible to transform this state into another and back again. The existence of such states was previously unknown.

Because the approach used here does not presuppose what exact transformation protocols are used, it rules out the reversibility of entanglement in all possible settings. It applies to all protocols, assuming they don’t generate new entanglement themselves. Lami explains, “Using entangling operations would be like running a distillery in which alcohol from elsewhere is secretly added to the beverage.”

Lami says, “We can conclude that no single quantity, such as the entanglement entropy, can tell us everything there is to know about the allowed transformations of entangled physical systems. The theory of entanglement and thermodynamics are thus governed by fundamentally different and incompatible sets of laws.”

This may mean that describing quantum entanglement is not as simple as scientists had hoped. Rather than being a drawback, however, the vastly greater complexity of the theory of entanglement compared to the classical laws of thermodynamics may allow us to use entanglement to achieve feats that would otherwise be completely inconceivable. “For now, what we know for certain is that entanglement hides an even richer and more complicated structure that we had given it credit for,” concludes Lami.

The paper is published in the journal Nature Physics.