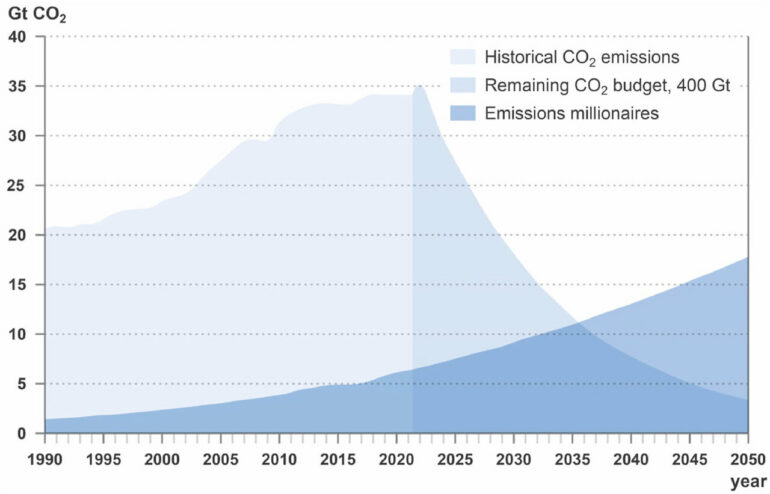 The number of millionaires in the world is steadily increasing, and their emission patterns make it difficult, if not impossible, to meet the Paris Agreement’s target of limiting global warming to 1.5 degrees Celsius. According to a new study by tourism professor Stefan Gössling, the millionaires will, within just a few decades, be responsible for almost three quarters of carbon dioxide emissions.

In a research report that was published in November 2022 in Cleaner Production Letters, Gössling established that one percent of the world’s total population is responsible for roughly half of all emissions from commercial air travel, the majority of which is associated with premium class air travel for affluent, frequent flyers.

Gössling and his research colleague Andreas Humpe at HM Hochschule München University of Applied Sciences have now developed a model for calculating how many millionaires there will be in the world in 2050 and how much emissions they will generate.

The results state that the share of millionaires in the world will increase from 0.7% today to 3.3%. According to the model, their emissions will be equivalent to 72% of the remaining carbon budget. This significantly reduces the chance of stabilizing climate change at 1.5 degrees Celsius.

“A continued growth in emissions at the top makes a low-carbon transition less likely, as the accelerating energy consumption by the wealthiest is likely beyond the system’s capacity to phase out fossil fuels. Therefore, we question whether policy measures like, for instance, progressive taxes targeting the high emitters will be sufficient to meet climate goals,” Gössling explains.

One of the more specific questions that Gössling and Humpe ask themselves in the study concerns legislation that compels the wealthy to introduce technology with no carbon dioxide emissions. This will require vast quantities of renewable energy, in particular for fuel production, which is difficult to achieve even at the current level of energy use.

“In order to eliminate dependence on Russian import of coal, oil, and gas and to reduce greenhouse gas emissions, countries like—for instance—Germany, Belgium, the Netherlands, and Denmark, have vowed to increase their investments in offshore wind energy. This puts additional pressure on the already ambitious plans to produce half of Europe’s electricity from wind energy by midcentury,” Gössling says.

Another key issue for the future will be whether it is possible to produce the sustainable aviation fuel required for this small fraction of humanity, or whether the energy demand among the wealthiest will require policies for governance and control to prohibit energy-intensive premium class and private air travel.

“Much has been written on the unequal distribution of emissions between individuals. There is a proven link between wealth and emissions; there is an extremely big difference between how much a person in—for instance—Central Africa generates in emissions compared to very wealthy individuals,” Gössling says.

The study also points out the significance of yacht ownership and air travel in generating very high emissions, and the top is responsible for a large share of overall emissions. It has also been established that the growth in overall emissions is driven from the top.

This study investigates the implications of these interrelationships for the remaining carbon budget, in a dynamic model of the emissions caused by the wealthy.

“Our findings raise the issue of global policy choices and our research confirms that it is important to target the high emitters. Without policies that mandate change, reduced energy use, and a transition to the use of renewable energy by the wealthy, it is difficult to see how global warming can remain within critical thresholds,” Gössling says.

Gössling stresses that even if policy measures that limit the high emitters are unavoidable and necessary, such as progressive taxes on emissions, they are hampered by three consecutive barriers.

The first barrier is the very realization among policy makers that the wealthy have to be limited in their energy use and guided in their investment decisions. In most countries, wealth accumulation continues to be seen as desirable and beneficial for overall economic growth.

The second barrier is represented by increasingly polarized political environments, in which politicians do not have the courage to propose, let alone implement mitigation policies. In many countries that have earlier presented themselves as climate change champions, a reversal of earlier policies is ongoing (e.g., Sweden), and where climate governance has made progress, it is not clear whether this legislation will be lasting (e.g., the U.S.).

The third barrier is policy designs that reliably reduce emissions at the top. Discussions of the wealthiest as contributing to particularly high emissions have featured prominently in the global media, but there is less evidence of politicians taking up the issue in systematic ways and going beyond market-based measures, such as comparably small increases in carbon taxes. Addressing the very wealthy will consequently be a complex undertaking.