Rare ‘orchid of the falls’ species declared extinct in the wild 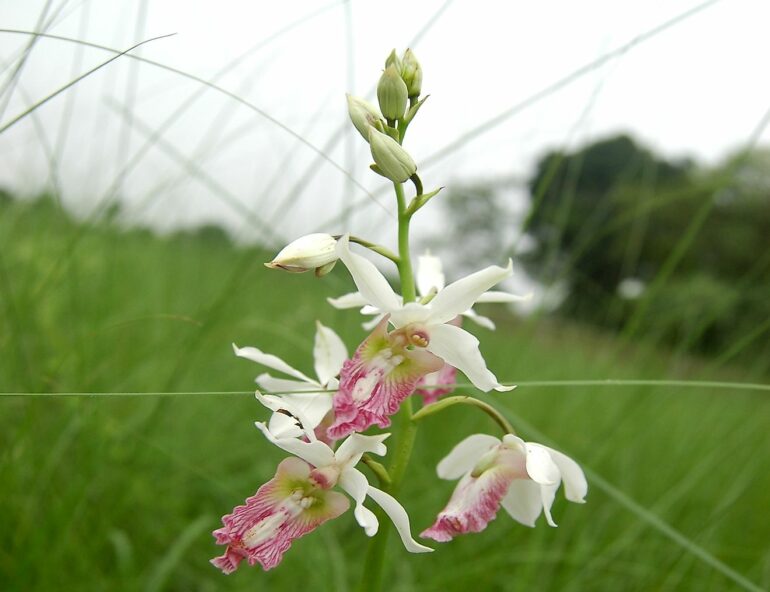 A team of botanists from Guinea and the Royal Botanic Gardens, Kew in the UK have sounded the death knell for a plant in the Saxicolella genus that is endemic to a single location in Guinea. The sad discovery was made by Kew botanist Dr. Martin Cheek who investigated the plant’s last-known co-ordinates using Google Earth satellite scans, following a taxonomic review of the Saxicolella genus published this week in the scientific journal Kew Bulletin.

The paper features several new species to science, one of which is Saxicolella deniseae, or ‘Denise’s Saxicolella’. Unfortunately, the most recent satellite images dated November 2021 reveal that the plant has been submerged by reservoir waters from a hydroelectric dam just 30-40 km downstream. According to Dr. Cheek, this development has effectively led to the plant’s extinction.

The Saxicolella genus of eight species occurs in the “orchids of the falls” family which contains about 300 species mainly in the tropics. While they are not orchids, they are all restricted to falls and rapids. Officially known as Podostemaceae, these are a family of waterfall plants restricted to living in fast-moving and aerated waters, many of which are only now being described to science. The plants featured prominently in an episode of the BBC’s The Green Planet documentary series earlier this year when naturalist David Attenborough referred to the family as the “orchids of the falls”.

Saxicolella deniseae was believed to be endemic to a single location along the Konkouré River in the Republic of Guinea, West Africa, now home to several newly constructed hydroelectric dams supplying energy to the region. The only known specimen was collected by (and named after) botanist Denise Molmou in 2018—the first and likely last scientist to see the species in the wild—under the Guinea Tropical Important Areas (TIPAs) program—an international effort to conserve plant tropical biodiversity in the wild.

Dr. Martin Cheek, Senior Research Leader in RBG Kew’s Africa team, says that “we know that many plant species have become extinct recently, but this case shows how unexpectedly and sudden extinction can be. In Africa, species of ‘orchids of the falls’ are often restricted to a single waterfall, sometimes to two, three or four on the same river. In this case because of the dam, multiple waterfalls along the Konkouré where the species might also have occurred are now under hydro reservoirs, so it looks pretty certain this species has become extinct. This likely happened last year, unknown to us until just now when we checked to see how close the reservoir had advanced towards the site.”

Regretfully the botanists have been unable to collect and store any viable seeds that could preserve S. deniseae’s genetic material. The experts faced travel restrictions between 2020 and 2021 due to the COVID pandemic and Kew’s partners at the National Herbarium of Guinea were hindered by the internal turmoil of a military coup in September of 2021. According to Dr. Cheek, attempts by local botanists to reach the plant would have been further hampered by the exceptionally poor state of the surrounding roads.

Denise Molmou, botanist at the UGAN-National Herbarium of Guinea, says that “while it is a great honor to have a species I discovered in the wild named after me, it is really sad that it is almost certainly extinct. I will look to see if we can find it in other waterfalls, even though the chance of finding it alive is not very high.”

The falls on a tributary of the Konkouré River where S. deniseae was found were targeted because there were no known collections of this plant along most of the river, despite the existence of multiple falls visible on Google Earth. This indicated no one had researched the biodiversity of plant life on the falls of this river.

To prevent the extinction of biodiversity in the wild, it is critical that botanists carry out full studies of plants in waterfalls in tropical areas, particularly before plans go ahead to build hydro-electric projects. Kew’s botanists believe it only takes one or two hours to investigate a waterfall for “orchids of the falls” species, followed by additional time to identify whether they are threatened with extinction, new to science or not. Sadly, formal studies are rarely carried out before such projects go ahead.

Clues to bee health found in their gut microbiome

Dr. Cheek says that “There is still a really tiny chance that this species survives somewhere, somehow. But since this hydro project, and another upstream, have flooded about 150 km of the length of the Konkouré river, and also the 30 km of the tributary on which this species occurred, it looks extremely likely that this species is lost forever. We will keep looking.”


Citation:
Rare ‘orchid of the falls’ species declared extinct in the wild (2022, June 1)