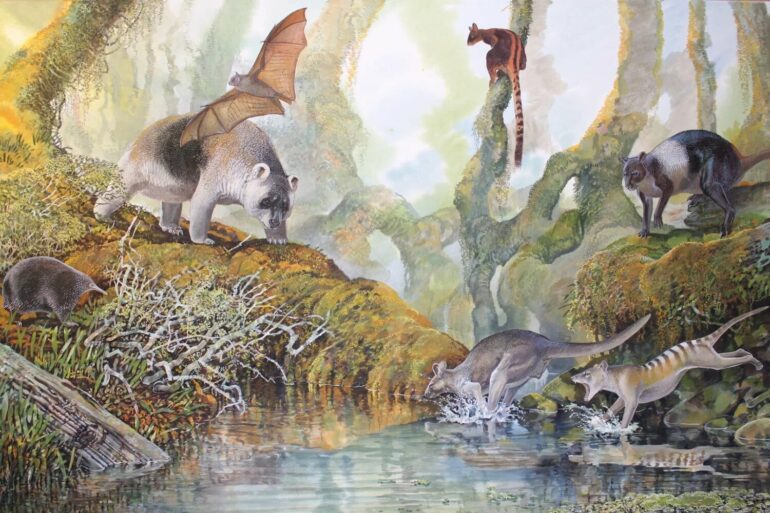 A giant kangaroo that once roamed on four legs through remote forests in the Papua New Guinea Highlands may have survived as recently as 20,000 years ago—long after large-bodied megafauna on mainland Australia went extinct, new research indicates.

The fresh analysis produced revised ages of the bones and suggests that several large mammal species, including the extinct thylacine and a panda-like marsupial (called Hulitherium tomasettii) still lived in the PNG Highlands when people first arrived, possibly around 60,000 years ago.

Remarkably, two large extinct kangaroo species, including one that bounded on four legs rather than hopping on two legs, may have persisted in the region for another 40,000 years.

“If these megafaunal species did indeed survive in the PNG Highlands for much longer than their Australian equivalents, then it may have been because people only visited the Nombe area infrequently and in low numbers until after 20,000 years ago,” says ANU Professor of Archaeological Science Tim Denham, co-lead author in the new study published in the journal Archaeology in Oceania.

“Nombe rock shelter is the only site in New Guinea known to have been occupied by people for tens of thousands of years and preserves remains of extinct megafaunal species, most of them unique to New Guinea.

“New Guinea is a forested, mountainous, northern part of the formerly more extensive Australian continent called ‘Sahul’ but our knowledge of its faunal and human history is poor compared with that of mainland Australia,” says Professor Denham who initially undertook fieldwork in the PNG Highlands in 1990.

Research co-author Professor Gavin Prideaux, from the Flinders University Palaeontology Laboratory, says the latest Nombe study is consistent with similar evidence from Kangaroo Island, previously produced by Flinders paleontologists and published in the Journal of Quaternary Science in 2015, that also suggests megafaunal kangaroos may have persisted to around 20,000 years ago in some of the less accessible areas of the continent.

He says many general assumptions about megafaunal extinction timelines have been “more harmful than helpful”.

“Although it is often assumed that all of the megafaunal species in Australia and New Guinea became extinct coast to coast by 40,000 years ago, this generalization is not based on very much actual evidence,” says Professor Prideaux. “It is probably more harmful than helpful in resolving exactly what happened to the dozens of large mammals, birds and reptiles that were living on the continent when people first arrived.”

The Nombe rock shelter, located in the vicinity of the Nongefaro, Pila and Nola communities in PNG, would have been infrequently visited by nomadic groups of Highlands peoples in prehistoric times.

The hidden rock shelter was first excavated by archaeologists in the 1960s, but the most intensive phase of fieldwork was conducted 1971 and 1980 by ANU archaeologist Dr. Mary-Jane Mountain, who is also an author on the latest paper. Her initial research yielded the first detailed description and interpretation of the Nombe site and played a pivotal role in shaping our understanding of the human history of the PNG Highlands.

“Mary-Jane (Mountain) initially hypothesized that megafauna at the site may have survived for tens of millennia after human colonization, but this has only been confirmed with the advent of new techniques in archaeology, dating and paleontological science,” Professor Denham says.

Professor Prideaux says these new applications of modern analytical techniques, or new excavations at the Nombe site, would further confirm timelines of late surviving megafauna and duration of occupation by people in PNG.

The latest research was published in Archaeology in Oceania.