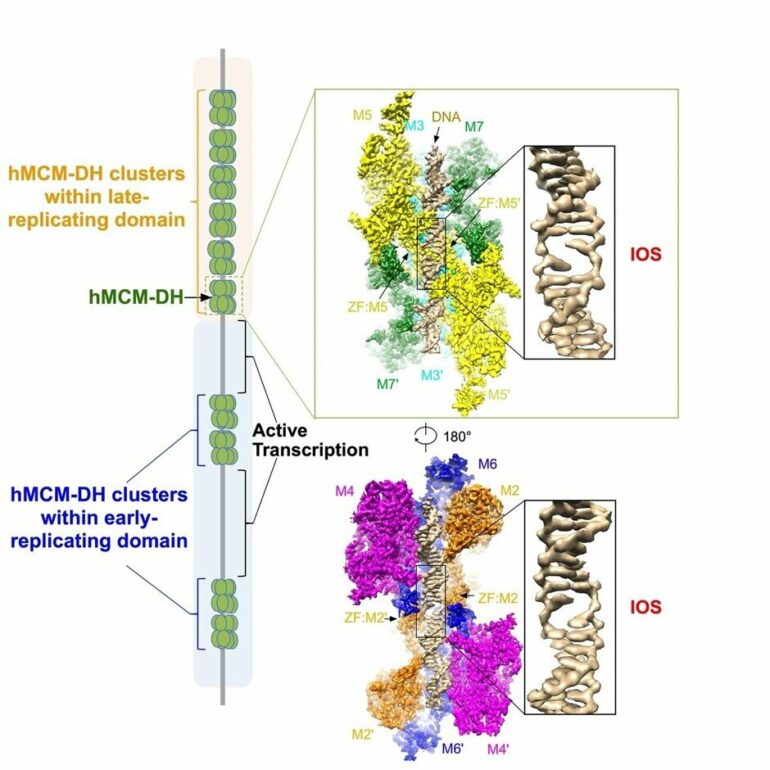 A research team led by Dr. Yuanliang Zhai from the School of Biological Sciences, The University of Hong Kong (HKU), and his collaborators from The Hong Kong University of Science and Technology (HKUST) and Institut Curie, France, has uncovered a new mechanism of the human MCM2-7 complex in regulating replication initiation, which can be used as a novel and effective anticancer strategy with the potential for the selective killing of cancer cells. The findings were recently published in Cell.

Human life begins with a single fertilized egg in the mother’s womb. This egg propagates through cell divisions and develops into our multicellular body. During each cell division, our genome DNA, the blueprint of genetic information, is accurately replicated. Each cell carries roughly 2 meters of DNA organized into 23 pairs of chromosomes. In our lifetime (~70 years), our body will synthesize more than a light year’s length of DNA of ~1016 meters—the distance light travels in one year. The replication process requires the DNA duplex to be first melted and then separated into two single-stranded templates for DNA polymerases to synthesize as complement strands. Any misregulation of this process can cause dire consequences, such as tumorigenesis and inherited genetic disorders.

“Unlocking the secret of DNA replication is key to understanding the mystery of life,” said Dr. Yuanliang Zhai, Assistant Professor of HKU School of Biological Sciences, “Solving the structures of replication machines is central to inform their molecular functions as seeing is believing.”

Since 1953 when James Watson and Francis Crick determined the structure of DNA, how the DNA duplex is initially melted has been a long-standing question for biologists. In eukaryotes, the enzyme responsible for unzipping the DNA duplex during replication was originally identified as the minichromosome maintenance protein complex (MCM) genes from wine brewing yeast by our collaborator Professor Bik-Kwoon Tye at Cornell University in 1983. The products of six MCM genes, MCM2 to MCM7 (MCM2-7), form a six-subunit ring complex, serving as the catalytic core of the unzipping machine, the DNA replicative helicase.

In cells, to initiate DNA replication, MCM2-7 complex must be first assembled into a head-to-head double hexamer (DH) encircling duplex DNA at thousands of places along each chromosome. Among a large reservoir of the assembled MCM2-7 DHs, only a subset of them will be finally selected and transformed into robust replicative helicases for DNA unwinding. It was believed that MCM2-7 DH could directly destabilize DNA to trigger an initial opening of duplex DNA. However, the underlying mechanism remained largely unknown.

To address this question, the research team sought to use a cutting-edge technology, cryo-electron microscopy (cryo-EM), to visualize the atomic details of the MCM2-7 DH, which are millions of times smaller than the resolution limit of human eyes.

In 2015, the team solved the first cryo-EM structure of MCM2-7 DH isolated from yeast at 3.8 Å, which was documented in the journal Nature. Unfortunately, the captured DNA was unstable and failed to inform the state of the DNA duplex bound by the MCM2-7 DH.

Recently, the researchers successfully purified the MCM2-7 DH from cultured human cells and determined its structure at 2.59 Å. This high-resolution structure presents a clear picture of how the MCM2-7 complex destabilizes DNA, giving rise to an initial opening of DNA duplex right at the juncture of the two coupled MCM2-7 hexamers.

The team also found that the MCM2-7 DHs are loaded onto DNA at tens of thousands of sites across the human genome, which are mutually exclusive with loci of active transcription. Furthermore, when this initial open structure is disturbed, MCM2-7 DHs can no longer assemble onto DNA, leading to a complete suppression of DNA replication initiation.

“The atomic-resolution cryo-EM structures enabled direct visualization of the initial DNA melting, which is crucial for us to understand the molecular mechanism of DNA replication,” said Dr. Shangyu Dang, Assistant Professor of Division of Life Science, HKUST, “This study also demonstrates the importance of collaboration. Efforts from research groups with complementary expertise are required to answer the fundamental biological questions.”

DNA replication has been targeted by several therapeutic cancer drugs. However, the available drugs indiscriminately kill all dividing cells because both normal and cancer cells must replicate their DNA for cell proliferation. Thus, the specificity of these drugs raises serious concerns about these anticancer chemotherapies. A more desirable alternative is to inhibit DNA replication initiation so that normal cells will be arrested in the G1 phase (first growth phase) or withdraw from the cell cycle into the G0 state (resting phase); but cancer cells will undergo apoptosis. Therefore, inhibition of replication initiation can be used as a novel and effective anticancer strategy with the potential for selective killing of cancer cells.

The findings in this study provide high-resolution structural and mechanistic information on the human pre-initiation complex that can be used to develop nontoxic anticancer drugs using the MCM2-7 complex as targets in future.