Salmonella vaccine for poultry contributed to rise of antibiotic-resistant bacteria 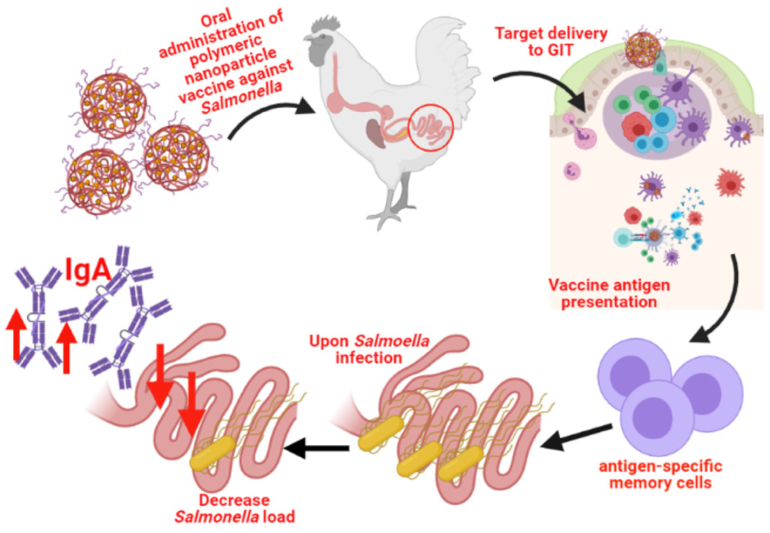 An investigation into the evolution of Salmonella bacteria infecting Brazilian poultry shows that the introduction of a Salmonella vaccine, combined with increasing antibiotic usage by Brazilian farmers, has led to the rise of strains that are more antibiotic-resistant, but less likely to cause disease in humans. Andrea Micke Moreno of the University of São Paulo, Brazil, and Alison Mather of Quadram Institute Bioscience, UK, report these findings in a new study publishing June 2nd in the open access journal PLOS Genetics.

The bacterium Salmonella enterica is a common cause of food poisoning in humans that frequently results from contaminated poultry. Brazil is the world’s largest exporter of chicken meat globally, and a team led by Micke Moreno and Mather wanted to know if the strains of Salmonella present in Brazil were contributing to food poisoning cases in countries that import their products. The researchers compared the genomes of 183 Salmonella collected from chickens in Brazil and 357 Salmonella genomes collected from humans, domestic poultry, and imported Brazilian poultry products in the United Kingdom. They also looked at more than 1,200 publicly available genomes of the two main types of Salmonella found in Brazil to see what they could learn about the evolution of the Brazilian strains.

The team found that distinct lineages of the two main Salmonella types developed in Brazil in the early 2000s, around the same time that the country introduced a Salmonella vaccine for poultry. These bacteria possess genes that make them resistant to three types of antibiotics. But despite their rise in Brazil, these antibiotic-resistant bacteria have caused very few cases of Salmonella in humans in the UK and have not spread to domestic chickens.

Overall, these findings suggest that the use of the Salmonella vaccine in Brazil, along with greater antibiotic usage, enabled the rise of drug-resistant forms of Salmonella, but that these bacteria have not led to greater numbers of food poisoning cases in the UK. The researchers point out that their evaluation of Salmonella genomes from a range of sources in Brazil and the UK reinforces the importance of taking a “One Health” approach to disease, which involves collaborative, multidisciplinary efforts to improve the health of people, animals, and the environment.

Mather adds, “Through our genomic detective work, we have tracked how changes in chicken rearing in Brazil have changed the profile of Salmonella bacteria found circulating within the poultry industry. Whilst this poses no immediate health risk to importing countries like the UK, the bacteria were resistant to antimicrobial drugs, and this highlights the importance of taking a ‘One Health’ approach that sees the connections between the health of people, animals and the environment, especially when assessing global food supply chains.”

Diphthamide is an Achilles heel shared by both plants and animals