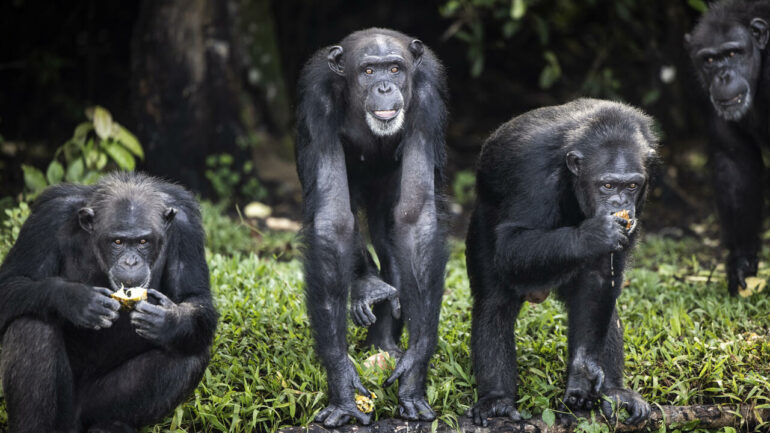 Scientists have produced the first genetic map of chimpanzees in the wild, offering a detailed reconstruction of the endangered species’ past migrations, and a new tool to combat illegal trafficking.

The genomic catalogue, which includes 828 individuals from across their vast African range, can now be used to link kidnapped chimpanzees—or their meat and body parts—to their place of origin within 100 kilometers.

The results of the years-long research project was published Wednesday in the journal Cell Genomics.

First author Claudia Fontsere of the Institute of Evolutionary Biology in Spain told AFP: “If we can know the genetic diversity of this endangered species, and its past demographic history…this can help design a better conservation plan.”

DNA samples were collected from thousands of chimp droppings as part of the Pan African Program at 48 locations across central and western Africa.

Fecal samples are a useful way to study endangered species because they allow for extensive collection with minimal interference to the animals.

But they also present technical challenges because they contain only trace amounts of host DNA.

To overcome these constraints, the team applied a new DNA sequencing technique called “target capture” that was first used to study Neanderthals whose remains have been degraded over thousands of years.

This allowed them to discover 50 percent more variants on a particular chromosome—number 21—than had previously been found, and from this infer past gene flow between chimpanzee populations, plugging gaps in scientific understanding.

Previously, only 59 whole chimpanzee genomes had been sequenced, mainly from captive animals with limited information about their origin.

Just like humans, chimps have complex migration histories, and the new research allowed the scientists to peer back over the past 100,000 years at a new level of detail.

“There has been a lot of debate on whether the four chimpanzee subspecies truly diverged from one another or whether there has been persistent gene-flow between them,” co-lead author Mimi Arandjelovic of the Max Planck Institute for Evolutionary Anthropology told AFP.

“We were able to show, using different analyses methods that look at very old and more recent variation, that the history is complex, much like that of our own species.”

The team learned that the chimpanzee subspecies were separated in the past, but also experienced periods of genetic exchange—helping explain why past studies that tried to reconstruct chimps’ evolutionary history came to differing conclusions.

They found geographical barriers like lakes and rivers also created genetic barriers between subspecies as well as between communities, and discovered new insights about periods when chimps cross bred with bonobos.

Importantly, they confirmed there was a high level of connectivity between Western chimpanzees, underscoring the need to preserve connections between forests across Western Africa, said Arandjelovic.

Fontsere explained the genetic map could help pinpoint where illegally trafficked chimps had come from.

Though reintroducing the chimps to the wild is a fraught task because of the animals’ complex social structure, research has shown they do better when placed in a sanctuary near their place of origin.

“It can help law enforcement to look at the more probable routes, we can trace it back,” said Fontsere.

They next hope to improve the genetic map with more samples, and, having proved that fecal DNA is a viable option, extend its use to study other primates.