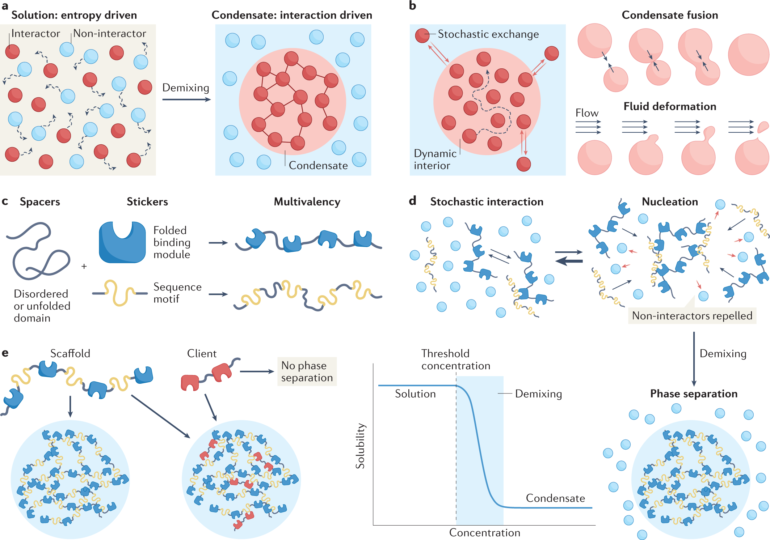 Protein complexes that play a critical role in launching an immune response assemble in droplets that form within the liquid environment in cells much like oil droplets in water, UT Southwestern scientists report in a new study. The findings, published in Molecular Cell, could lead to new interventions to regulate immunity in individuals with overactive or underactive immune responses.

“These droplets basically function as microreactors that concentrate proteins and their substrates within. It’s like forming compartments without needing membranes to surround them,” said study leader Zhijian “James” Chen, Ph.D., Professor of Molecular Biology and Director of the Center for Inflammation Research at UTSW, a Howard Hughes Medical Institute Investigator, and winner of the 2019 Breakthrough Prize in Life Sciences.

More than two decades ago, the Chen lab discovered that a protein called ubiquitin assembles into chains inside cells when the cells are exposed to inflammatory molecules, such as interleukin-1β (IL-1β) or tumor necrosis factor α (TNFα). Dr. Chen and his colleagues showed that the chains are key for promoting an immune response and can activate a group of proteins known as the IκB complex (IKK), which includes a component known as NEMO. This complex in turn triggers a protein called NF-κB to move to the nucleus and turn on hundreds of immune-related genes. But how the polyubiquitin chains, NEMO, and IKK come together has been unclear.

The team further studied this process using NEMO that was altered by mutations associated with a rare disease known as NEMO deficiency syndrome, which severely blunts immune response to bacterial infections. NEMO that carried these mutations could not effectively condense into droplets with polyubiquitin chains, preventing the cascade of events that triggers an immune response.

Dr. Chen noted that better understanding of this liquid phase separation phenomenon could eventually lead to treatments for NEMO deficiency syndrome and interventions to counteract overactive or underactive immunity, the root cause of autoimmune disorders and increased susceptibility to infection, respectively.

New insight into the possible origins of life