Seeing antibiotics in action inside a pathogenic bacterium 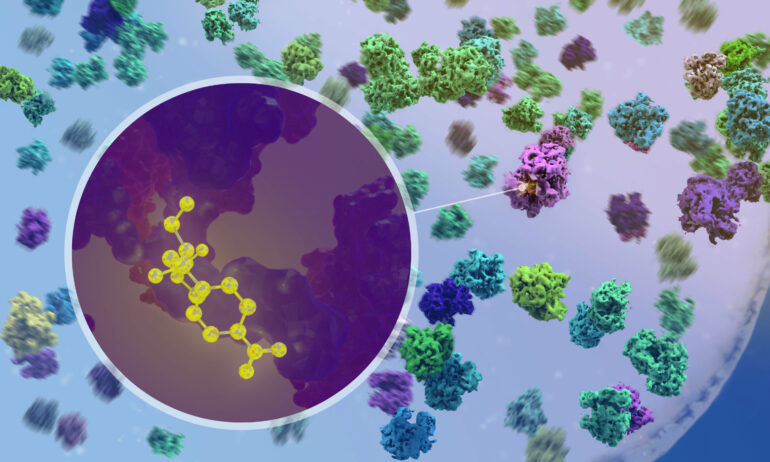 Every living cell relies on proteins in order to function and the process of protein synthesis—translation—is critical for survival. Bacteria are no exception, with molecular machines involved in translation being one of the most common targets for antibiotics.

Now, for the first time, scientists led by Julia Mahamid’s group at EMBL Heidelberg have visualized at atomic detail how antibiotics affect the process of protein production inside bacterial cells. This study, published in Nature, also marks the first time when scientists have observed atomic-level structural changes in the active translation machinery directly inside a cell, rather than using isolated molecules in a test tube. Importantly, this approach allowed them to identify mechanisms that such machines use to “talk” to each other inside cells.

The study was carried out in collaboration with researchers from the Max-Planck-Institute for Biophysical Chemistry, Göttingen, the Wellcome Centre for Cell Biology, University of Edinburgh, and Technische Universität Berlin. The research also involved contributions from the Zimmermann-Kogadeeva and Bork groups at EMBL Heidelberg, who helped the researchers carry out bioinformatics analyses to observe what diversity in ribosomal proteins looks like across >4000 representative bacteria.

Mahamid and her team are experts in studying the bacterium Mycoplasma pneumoniae using a technique called cryo-electron tomography (cryo-ET). This tiny bacterium, which causes atypical pneumonia in humans, has a fully-functional protein synthesis machinery, despite being only about ten-thousandth of a millimeter in size.

“We chose Mycoplasma for our studies because they are among the smallest and most minimal living cells, and have been widely used as model cells in systems biology and synthetic biology studies,” said Liang Xue, postdoc in the Mahamid group and the first author of the study.

Cryo-ET allows researchers to take serial images of flash-frozen biological samples using an electron microscope and combine the resulting images to form a three-dimensional view of a cell—somewhat like a mini-MRI machine. “With large scale cryo-ET data from pristinely preserved cells, it is possible to capture high-resolution snapshots of different states of a molecular machine in action and combine them into a movie,” said Mahamid.

One of the most prominent structures when one looks at a cryo-ET image of a Mycoplasma cell are tiny dark blobs—these are the ribosomes. “The ribosome is one of the most ancient macromolecular machines, which may have existed even before the emergence of cells,” said Xue. Ribosomes are the primary molecular machines involved in protein translation, and they are present in all cells—from bacteria to human.

The Mahamid group’s approach allowed them to not only spot and count the ribosomes inside the bacteria, but also see their structure at atomic resolution. By studying a large number of ribosomes “frozen” at different stages of their activity cycle, the scientists could decipher how the ribosome structure changes as it proceeds through the protein synthesis process. Not only this, but they could also localize the ribosomes in the three-dimensional space inside the cell, which allowed them to identify how the process of translation is organized spatially.

“Inside living cells, ribosomes function as highly interconnected systems, rather than individual molecular machines,” said Xue. “We revealed new features in ribosomes and the diverse translation reaction paths in cells.”

Crucially, using cryo-ET, the researchers could observe what happens when antibiotics enter the cell and bind to ribosomes. For example, they could confirm that the two broad-spectrum antibiotics chloramphenicol and spectinomycin bind to different sites on the ribosome and disrupt different steps of the protein synthesis process. This had been predicted by studies on isolated ribosomes, but never before been observed in action inside an actual bacterial cell.

“It was very exciting when we were first able to see the drug molecule binding to a ribosome inside the cell,” said Xue. “But it was even more exciting when we found that the ribosome populations in antibiotic-treated cells are fundamentally reshaped—functionally, structurally, and spatially.”

The researchers observed that the interactions between ribosomes and other complexes in the cell changed in response to the drug, suggesting that an antibiotic can have an effect that reaches far beyond the specific complex it binds to. “On the one hand, this can help understand off-target effects of antibiotics, and may also help design combinations of antibiotics to increase their efficiency,” said Mahamid.

The Mahamid group continues to use the power of cryo-ET to study fundamental biological processes. “What we are able to do for this exquisitely simple model system is in principle applicable to much more complex models,” said Mahamid. “For example, in our group we study the interaction between viruses and their human cell host, the organization of human pluripotent stem cells and the functioning of their ribosomes, and even large multicellular 3D organoids that our collaborators and we grow from cells taken directly from cancer patients.”


Citation:
Seeing antibiotics in action inside a pathogenic bacterium (2022, September 28)