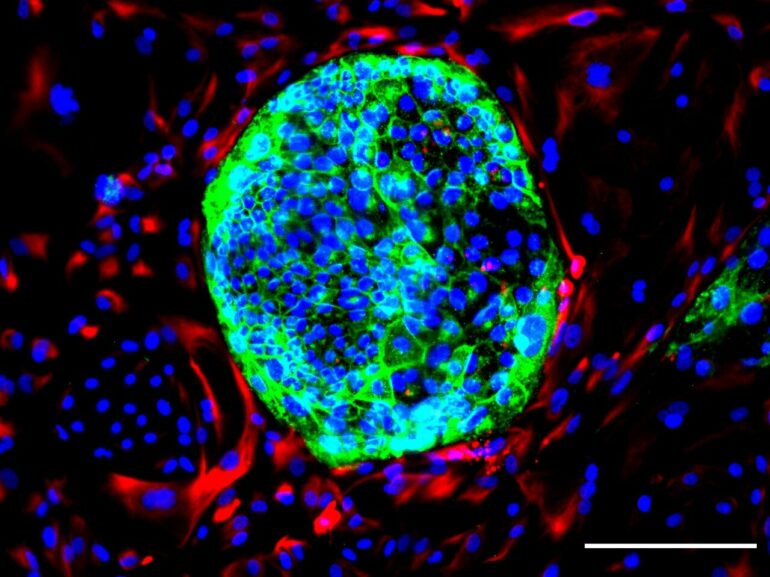 Professor Vincent Pasque and his team at KU Leuven have managed to generate a new type of human cell in the lab using stem cells. The new cells closely resemble their natural counterparts in early human embryos. As a result, researchers can now better study what happens just after an embryo implants in the womb. The findings were published in Cell Stem Cell.

When all goes well, a human embryo implants in the womb about seven days after fertilization. At that point, the embryo becomes inaccessible for research due to technical and ethical limitations. That is why scientists have already developed stem cell models for various types of embryonic and extraembryonic cells to study human development in a dish.

Vincent Pasque’s team at KU Leuven has developed the first model for a specific type of human embryo cells, extraembryonic mesoderm cells. Professor Pasque said, “These cells generate the first blood in an embryo, help to attach the embryo to the future placenta, and play a role in forming the primitive umbilical cord. In humans, this type of cell appears at an earlier developmental stage than in mouse embryos, and there might be other important differences between species. That makes our model especially important: research in mice may not give us answers that also apply to humans.”

The researchers made their model cells from human stem cells that can still develop into all cell types of an embryo. The new cells closely resemble their natural counterparts in human embryos and are therefore a good model for that specific cell type.

“You don’t make a new human cell type every day,” Pasque says. “We are very excited because now we can study processes that normally remain inaccessible during development. In fact, the model has already enabled us to find out where extraembryonic mesoderm cells come from. In the longer term, our model will hopefully also shed more light on medical challenges such as fertility problems, miscarriages, and developmental disorders.”