Study finds Australian caves are up to 500,000 years older than we thought, and it could explain a megafauna mystery 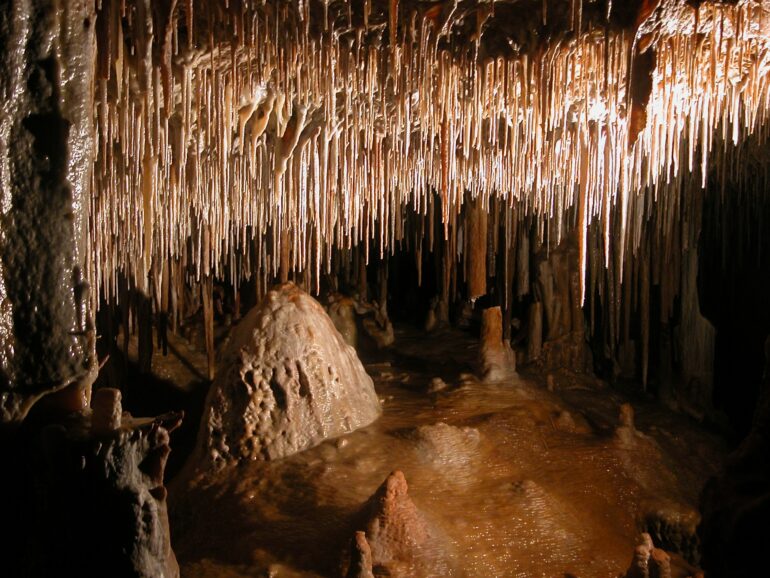 South Australia’s Naracoorte Caves is one of the world’s best fossil sites, containing a record spanning more than half a million years. Among the remains preserved in layers of sand are the bones of many iconic Australian megafauna species that became extinct between 48,000 and 37,000 years ago.

The reasons for the demise of these megafauna species are intensely debated. But the older the fossils we can find, the better we can understand the species’ evolution and extinction.

To date, determining the precise age of the caves has been difficult. However our research demonstrates, for the first time, how old Naracoorte’s caves really are—and the answer is up to 500,000 years older than previously thought.

Our findings shed new light on the antiquity of this important place. We hope this will aid understanding of how biodiversity responds to a changing climate over time.

A moment in geologic time

Caves can be extraordinary time capsules, often preserving the remains of long extinct plants and animals in exquisite detail. The Naracoorte Caves in South Australia is one such example.

The cave complex is South Australia’s only World Heritage site. Among the remarkably diverse and complete fossil record are the remains of iconic megafauna such as:

Paleontologists have excavated and dated many of these fossil deposits and reconstructed the skeletons of a number of megafauna species.

The caves formed when groundwater percolated through cracks in limestone rocks, dissolving them and forming cavities. They were previously dated at between 0.8 and 1.1 million years old—an estimate generated by dating a fossil dune ridge that lies over the cave complex.

But the methods used to date the dune ridge were not entirely suitable for the task. As such, a precise age of the caves had not been obtained, until now.

This intricate work involved in our study has taken five years, but it was worth the wait.

The dating method we used in our Communications Earth & Environment study involved examining the beautiful calcite formations inside the caves. Collectively, these are called “speleothems” and they include stalagmites, stalactites and flowstones.

When speleothems form, tiny amounts of uranium—a radioactive element—are locked inside them. Over time, uranium slowly decays into the element lead. This occurs at a known, constant rate—which means we can use uranium in speleothems as a natural clock to date them.

Doing so involved extracting uranium and lead from the speleothem in a laboratory. We then measured each element and calculate the sample’s age very precisely.

Because speleothems only start to grow once a subterranean cavity is formed and above the groundwater table, the oldest speleothem age reveals the minimum age of the cave itself.

The second part of our study sought to determine when the caves first opened to the surface, allowing both air and animals in. We did this by examining microscopic particles of charcoal and pollen captured in the calcite formations as they grew.

There’s heated debate about whether the extinction of Australia’s megafauna was the result of humans or the climate.

A good chronology is key to understanding when and how quickly natural processes occurred over time. Without precise ages, we cannot know the rate of change to landscapes, climate or biodiversity.

So while the Naracoorte Caves formed at least 1.34 million years ago, they did not open to the surface until 600,000 years ago. This sheds new light on the vast separation in time between landforms evolving and fossils accumulating.

Our new approach can help to unravel how old fossil deposits at other cave complexes in Australia and around the world where both speleothems and vertebrate fossils are found.

Australia’s richness of plant and animal species faces an uncertain future, due to climate change and other human impacts. Studying important sites such as the Naracoorte Caves helps us understand not just how climate change influenced biodiversity in the past, but what might happen in future.

Citation:
Study finds Australian caves are up to 500,000 years older than we thought, and it could explain a megafauna mystery (2022, September 27)