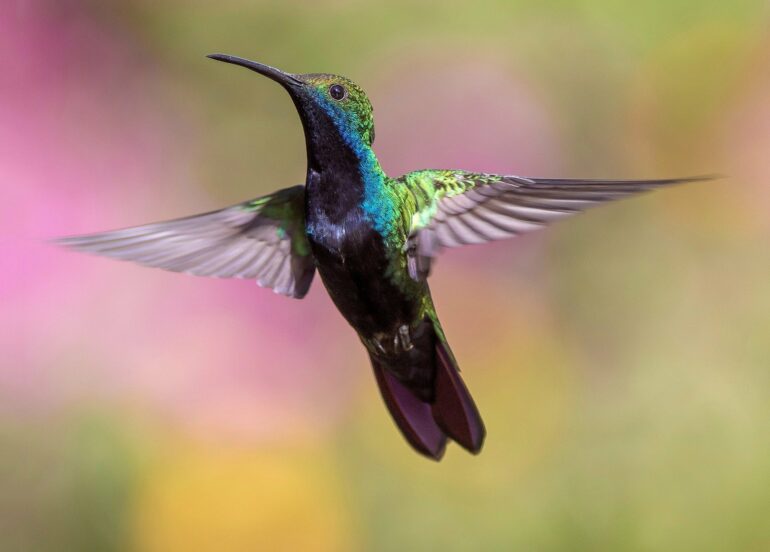 Hummingbirds, native to North and South America, are among the smallest and most agile birds in the world. Often barely larger than a thumb, they are the only bird species that can fly not only forwards, but also backwards or sideways. Their characteristic hovering flight makes that possible.

However, hovering is extremely energy-demanding. In a genomic study published in the journal Science, an international team of scientists led by Prof. Michael Hiller at the LOEWE Centre for Translational Biodiversity Genomics (LOEWE-TBG) in Frankfurt, Germany, has investigated the evolutionary adaptations of the metabolism that may have enabled the hummingbirds’ unique flying abilities.

During hovering, hummingbirds flap their wings up to 80 times per second, creating the characteristic humming sound. No other form of locomotion in the animal kingdom consumes more energy. Accordingly, their metabolism runs at full speed and is more active than that of any other vertebrate. To meet their energy needs, hummingbirds rely on the sugar in flower nectar. Hummingbirds’ metabolism also has some distinctive features: They absorb sugar quickly, have highly active enzymes that process sugars, and can metabolize fructose just as efficiently as glucose—unlike, for example, humans.

Researchers from Frankfurt and Dresden have now discovered how this benefits the cells of the flight muscles that allow hummingbirds to hover. In their study, they sequenced the genome of the long-tailed hermit (Phaethornis superciliosus) and compared this and other hummingbird genomes with the genomes of 45 other birds, such as chicken, pigeon, or eagle.

They discovered that the gene encoding the muscle enzyme FBP2 (fructose bisphosphatase 2) was lost in all studied hummingbirds. Interestingly, further investigations showed that this gene had already been lost in the common ancestor of all living hummingbirds, during a period when hovering flight and nectar feeding evolved—around 48 to 30 million years ago.

“Our experiments showed that the targeted inactivation of the FBP2 gene in muscle cells enhances sugar metabolism. Furthermore, the number and activity of the energy-producing mitochondria increases in cells lacking FBP2. All this has already been observed in the flight muscles of hummingbirds,” explains first author Dr. Ekaterina Osipova, currently a postdoctoral fellow at Harvard University and previously a scientist at the Max Planck Institute of Molecular Cell Biology and Genetics in Dresden and the LOEWE-TBG in Frankfurt.

“Since the FBP2 gene is only expressed in muscle cells, our results suggest that the loss of this gene in the hummingbird ancestor was likely a key step in the evolution of metabolic muscle adaptations required for hovering flight,” adds study leader Michael Hiller, Professor of Comparative Genomics at the LOEWE-TBG and the Senckenberg Society for Nature Research.

In addition to the loss of the FBP2 gene, other important genomic changes probably occurred in hummingbirds. Several other genes that play important roles in sugar metabolism exhibit amino acid changes in hummingbirds, likely because of directed selection. “The relevance of changes in these genes for evolutionary adaptations in hummingbird metabolism needs to be clarified by further studies and experiments,” Hiller said.

Sea dragons’ genes give clues to their distinctive looks