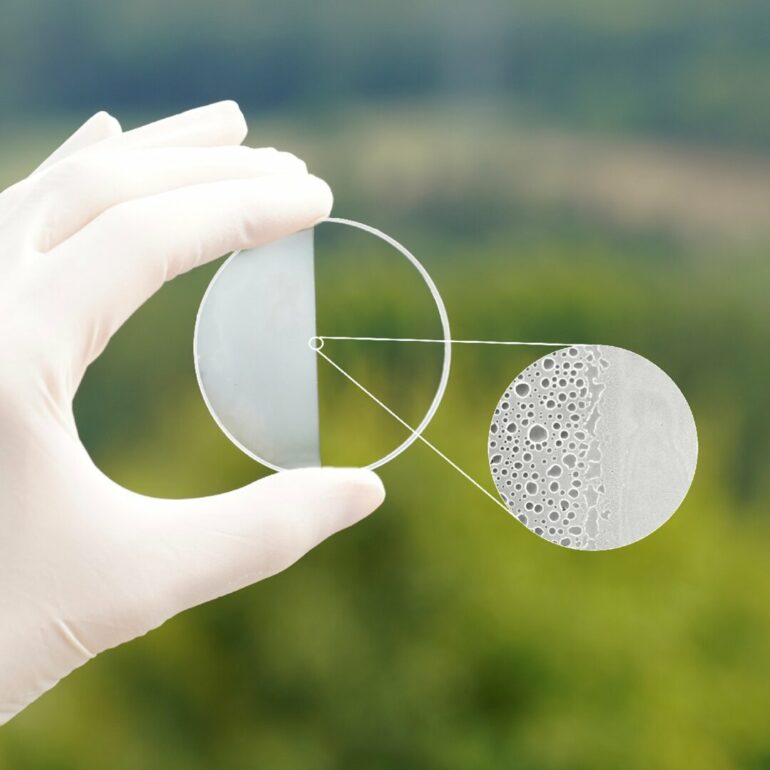 Researchers have developed an optical coating system that combines antifogging and antireflective properties. The new technology could help boost the performance of lidar systems and cameras.

“Walking into a warm room from the cold outside can cause glasses to fog up, blinding the user,” said research team leader Anne Gärtner from Fraunhofer Institute for Applied Optics and Precision Engineering and Friedrich Schiller University Jena, both in Jena, Germany. “The same can happen to sensors such as the lidar systems used in autonomous cars. It is important that surfaces remain highly transparent, even if fogging occurs, so that functionality is maintained.”

In Applied Optics, Gärtner and colleagues describe how they combined a polymer coating that prevents fogging with porous silicon dioxide nanostructures that reduce reflections. Although the coatings described in the paper were designed specifically for lidar systems, the technology can be tailored for many different applications.

“In our coating system the anti-fogging and anti-reflective properties are excellently combined, something which has not been previously feasible,” said Gärtner. “Samples manufactured with this new coating technology have already been used successfully for a year in several airborne lidar prototypes operating in various climatic conditions around the world.”

The coating system described in the paper was developed in response to a need identified by Leica Geosystems in Heerbrugg, Switzerland. Leica Geosystems develops airborne lidar measurement systems that are used for terrain and city mapping.

When there are extreme temperature differences between the environment and the measuring system, fogging sometimes occurs on the optical surfaces, impairing functionality. Gärtner’s team collaborated with Leica Geosystems to develop a solution that managed the fogging as well as undesirable light reflections.

“We used a polymer that prevents fogging on an optical surface by acting as a water reservoir,” said Gärtner. “However, differences in the refractive indices of the polymer material and the surrounding air leads to unwanted reflections and ghost light. To prevent these reflections, we combined the antifog film with very small structures—up to 320 nm high—to create an anti-reflective effect together with water permeability.”

To make the multifunctional coating system, the researchers applied AR-plas2 technology developed at the Fraunhofer Institute for Applied Optics and Precision Engineering. It allows several nanostructures to be created on top of each other. The process involved etching a nanostructure into the antifog coating and then fabricating a second nanostructure on top.

With this technology, it is possible to adjust the refractive indices of the nanostructures to tailor the design of the double nanostructure to achieve very low reflection over a wide spectral range.

The researchers tested the antireflection and antifog effects of their coating system using reflectance measurements acquired with a spectrophotometer and fogging measurements obtained after holding the antireflection/antifogging side of the optic over heated water. These laboratory tests showed that the multi-layer system exhibited very low reflection over a wide spectral range, which would be impossible with a single nanostructure. Additionally, the nanostructures did not affect the coating’s antifog properties.

Because the structures are generated in a standard plasma-ion-assisted coating machine, the new approach can be easily incorporated into commercial manufacturing processes. In addition to being applied in several lidar prototype systems, the coating technology is already being used in cutting-edge smartphone cameras.

The researchers are now exploring how the coating system could be transferred to other areas such as adaptive lighting systems in the automotive sector or the development of quantum computers.

“Optical systems are becoming more and more complex and thus the demands on image quality are also increasing,” said Gärtner. “With nanostructures, anti-reflective properties can be achieved with impressive results that are often not feasible with conventional coatings. With the fundamental understanding we gained over the recent years, we are confident that we can bring nanostructured coatings to many real-world applications.”