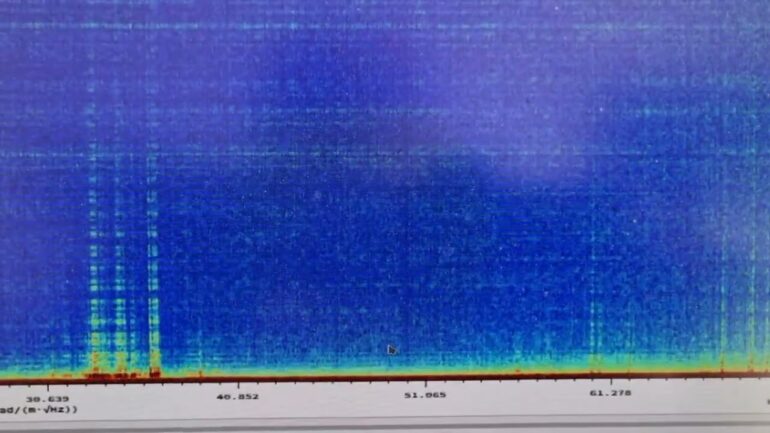 The more than 1.2 million km of fiber-optic cables that crisscross the planet carry the world’s phone calls, internet signals and data. But this summer, researchers published the eerie sounds of blue and fin whales detected by a fiber-optic cable on the west coast of Svalbard—a first.

Now the researchers want to eavesdrop on an even larger beast—the Earth itself.

Combining the world’s fiber-optic network with existing remote-sensing systems, like satellites, could create a low-cost global real-time monitoring network, said Martin Landrø, a professor at the Norwegian University of Science and Technology’s (NTNU) Department of Electronic Systems and head of the Center for Geophysical Forecasting.

“This could be a game-changing global observatory for ocean-Earth sciences,” he said. Landrø was lead author for an article about how such a system could work, published in Scientific Reports.

Tiny changes in a fiber the diameter of a hair

Fiber-optic cables are nothing new. They’re probably carrying the information your computer is decoding so you can read this article.

What has changed, however, are the tools that can be used to extract information from these networks. The tool in question has the rather alarming name of an interrogator.

The interrogator can be hooked up to a fiber-optic cable network to send a pulse of light through the cable. Any time a sound wave or an actual wave hits the underwater cable, the fiber flexes, just a little bit.

“And we can measure the relative stretch of the fiber extremely precisely,” Landrø said. “It has been around for a long time, this technology. But it has made a huge step forward in the last past five years. So now we are able to use this to monitor and measure acoustic signals over distances up to 100 to 200 kilometers. So that’s the new thing.”

Landrø’s team—including researchers from Sikt, the Norwegian Agency for Shared Services in Education and Research, and Alcatel Submarine Networks Norway, AS, which provided the interrogators, used a 120 km long fiber-optic cable between Longyearbyen, the largest settlement in Svalbard, and Ny-Ålesund, a research outpost on the southwest coast of the largest island in the archipelago. They monitored the cable for 44 days in 2020, and tallied up more than 800 whale vocalizations.

“The fiber cable between Longyearbyen and Ny-Ålesund, which was put in production in 2015 after 5 years of planning and prework, and mainly funded by our ministry, was intended to serve the research community and the geodetic station in Ny Ålesund with high and resilient communication capacity,” Olaf Schjelderup, head of Sikt’s national R&E network, said in an earlier article about the monitoring project. Schjelderup was also a co-author on the new paper.

“The DAS sensing and whale observation experiment shows a completely new use of this kind of fiber optic infrastructure, resulting in excellent, unique science,” he said.

The technology is good, but range continues to be a limitation. The hope is it will get even better as the technology improves, Landrø said.

“Although current interrogators are not yet able to sense beyond the repeaters typically used in long fiber-optic cables, the technology is developing very quickly and we expect to be able to overcome these limitations soon,” Landrø said.

Ships, earthquakes, and a strange pattern of waves

In the process of detecting whale calls, the researchers were also able to detect ships passing over or near the cable, a series of earthquakes, and a strange pattern of waves that they eventually realized was due to distant storms.

The measurements were precise enough that they could correlate their measurements with each exact event that had happened—including a big earthquake in Alaska, Landrø said.

“We saw a lot of ship traffic, of course, and a lot of earthquakes, the biggest of which was from Alaska,” he said. “That was a big one—we saw it on every channel (in the cable) for all 120 km. And we also saw that we could detect distant storms.”

One example of how the system was able to detect ships involved the Norbjørn, a general cargo ship that was detected crossing the fiber-optic cable about 86.5 km from Longyearbyen. The researchers were able to estimate the ship’s speed from its track across the cable, and then could verify it with the ship’s Automatic Identification System (AIS) track.

A key publication from 1963

Researchers were initially puzzled by the dozen series of waves they detected during the monitoring period. Each wave event lasted between 50-100 hours, where the frequency of the waves increased monotonically during the event. But eventually they realized that the mystery signals were the swells sent by distant storms.

“These are the physical ocean waves that travel on the sea surface,” Landrø said.

The lowest frequency waves travel the fastest, followed by higher frequency waves that arrive as much as 6 days later. It’s a pattern that was recognized in 1963, when the oceanographer Walter Munk published a paper describing how scientists could figure out where the waves generated by storms were coming from, by measuring the slope of the frequency-time plot of the waves and doing some calculations.

Using these calculations, Landrø’s team identified Tropical Storm Eduardo, which was 4100 km from Svalbard in the Gulf of Mexico. They also identified a big storm off of Brazil, 13,000 km away from the Svalbard cable.

Geologists already have a network of sensors that help them monitor and measure earthquakes, called seismometers. These instruments are sensitive and provide a great deal of detailed information, Landrø said.

However, seismometers are expensive, and they aren’t nearly as widely distributed as the world’s fiber-optic cable network.

The one drawback with the fiber-optic network is that it has a lower signal-to-noise ratio. That means there’s a lot of background noise, and the signal—from the earthquake—isn’t as clear or strong against the background noise.

But the advantage of the fiber network is that it is widespread, and already in place, which means it could provide additional information to existing seismometers. The idea wouldn’t be to replace the existing system, but to complement it.

“The question then is, what can we learn from a method that has lower signal-to-noise ratio, but has better spatial coverage? How could we use that extra information, even though it is lower quality, to learn more about the earthquake and its properties?” Landrø said.

There’s also the question as to whether existing fiber optic networks could be used to monitor undersea pipelines—which is especially important given the explosion in late September that damaged the Nord Stream 1 and 2 pipelines.

“Can we use this fiber-optic technology to monitor and protect infrastructure on the seabed? That’s an important question,” he said.

The challenge with pipelines is that they make noise, as gas flows through the pipe.

“With the background noise, we have to characterize the natural variability. And then if you have something coming close to that pipeline, what is the threshold? When do you act, what can you detect? And we don’t know,” he said. “So the plan is to conduct dedicated tests on this.”

Eventually, the idea could be to have real-time monitoring of pipelines to make sure they are safe. Already, researchers have a real-time stream of acoustic data from the Svalbard fiber network.