Testing their mettle: How bacteria in deep-sea vents deal with toxic metal environments 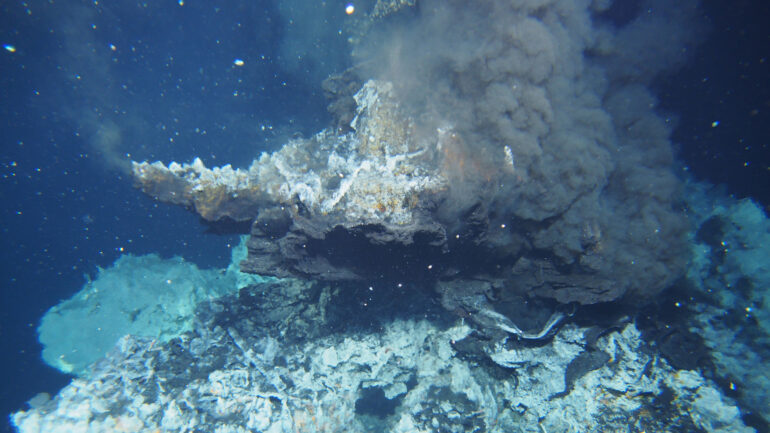 When imagining the deep sea, we often think of a cold, dark and empty wasteland, sparsely populated by monstrous-looking creatures of the deep. But in fissures along the seabed, ocean water superheated by the Earth’s magma and enriched with minerals from the crust gushes upwards, forming hydrothermal vents that act as oases for a diverse and unique marine ecosystem.

Sunlight, which powers most life on Earth, cannot penetrate to these vast depths. Instead, the creatures here, like tubeworms, crabs, and mussels, all rely on bacteria, which can capture chemical energy from compounds released by the vents.

Now, a team of researchers from the Okinawa Institute of Science and Technology (OIST), in collaboration with the Japan Agency for Marine-Earth Science and Technology (JAMSTEC), have identified how bacteria can adapt to the toxic metals released from hydrothermal vents. Their findings were published in the journal, Environmental Microbiology.

“Hydrothermal vents are perhaps the most extreme environment found on Earth, with high pressure, high temperatures, no oxygen and an abundance of toxic metals,” said Dr. Angela Ares, a former postdoctoral researcher in the Marine Biophysics Unit (Prof. Satoshi Mitarai) at OIST and first author of the study. “Bacteria are amazing organisms and have managed to adapt to such challenging conditions. Understanding how they succeeded could lead to really important applications, such as new solutions for cleaning up toxic metals that have leaked into the environment.”

In the study, Dr. Ares and her colleagues focused on the metal tolerance strategies of Nitratiruptor sp. SB155-2. This species of bacteria was isolated from vents in the Okinawa Trough and cultured and provided to OIST by JAMSTEC.

Overall, there are three main ways that bacteria can deal with toxic metals. One method is to continuously pump the metal ions inside the cells back out into the surroundings. Another strategy is to sequester the toxic metal into granules inside the cell, so that they can’t interfere with the bacteria’s metabolic reactions. Finally, bacteria can make and release enzymes that can cause the metals to crystalize or precipitate into a non-toxic compound outside the cell.

The researchers looked for similarities and differences in the strategies of the bacteria in response to two different metals commonly found in these vents, cadmium and copper.

“Both these metals are toxic even in low concentrations, but there’s one crucial difference—bacteria need copper in trace amounts, while cadmium has no known biological function,” explained Dr. Ares. “We expected that the bacteria might therefore have a more complex response to copper than cadmium, so that the copper concentration can be closely regulated.”

The researchers found that the bacteria used transporter proteins as a general, non-specific strategy to pump both cadmium and copper out of their cells. However, there were also clear differences in the bacteria’s response to the two metals.

“For copper, we found that a much higher number of genes related to transport pumps were involved, along with genes involved in other stress-related pathways. This suggests that the response to copper is indeed more sophisticated, allowing for finetuning of copper concentration,” said Dr. Ares.

On the other hand, the bacteria also responded to cadmium using methods that weren’t seen for copper. One of the most surprising responses was an increase in the activity of genes involved in flagella formation and chemotaxis (movement in response to chemical cues).

“It’s one thing to measure gene expression, but seeing is believing, so we checked the bacteria using scanning electron microscopy,” said Dr. Ares. “And amazingly, the bacteria exposed to cadmium were indeed more likely to have flagella than our non-stressed bacteria.”

Flagella help propel bacteria around, so one potential explanation is that when cadmium levels are too high, the stressed bacteria attempt to move to a more favorable environment. Chemotaxis also comes into play here, as the bacteria move away from or towards specific chemical cues to find better growing conditions, rather than just moving randomly.

The state-of-the-art electron microscopes at OIST also allowed the team to detect the build-up of the precipitate, cadmium sulfate, in the outer part of the bacteria cell wall. The researchers also saw that granules within the bacteria, which also contained cadmium, grew bigger and more abundant.

“Seeing the bacteria use these methods to detoxify cadmium is really exciting, as it gives scientists a new avenue to explore for cleaning up heavy metals without relying on carbon-intensive methods,” said Dr. Ares.