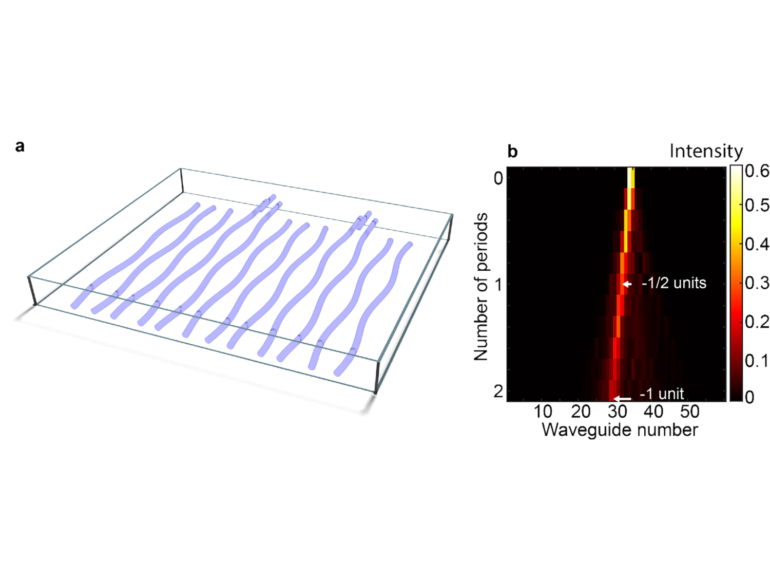 Particles of light—photons—that are forced to interact with each other through specially structured glass demonstrate behavior evocative of the “fractional quantum Hall effect,” a phenomenon that garnered the 1998 Nobel Prize in physics when demonstrated with electrons. A team of researchers at Penn State has now demonstrated that the movement of light from an extremely powerful laser becomes “fractionalized” as it passes through the glass, an emergent property that adds to our fundamental understanding of physics that emerges from complex environments.

“Electrons are charged particles and their charge is a fundamental constant of nature,” said Mikael Rechtsman, associate professor of physics at Penn State and the leader of the research team. “In the fractional quantum Hall effect, it was shown that electrons interacting with each other under certain conditions behave like particles with some fraction of that charge and can potentially be used for more robust quantum computing. We have now demonstrated a phenomenon that, while fundamentally distinct from the electronic version, suggests that a different kind of fractionalization can occur with light that interacts with itself.”

Unlike electrons, photons normally don’t interact with each other because they don’t have any charge. However, if you have a strong enough laser and you pass it through a material that responds to that power, the photons behave as if they are interacting since the material effectively mediates interaction between them. In other words, the photons influence each other by influencing the material. The researchers design the material—specialized glass with an array of complexly structured “waveguides” that pass through it like optical fibers—such that the photons clump together into objects called “solitons.”

“Normally, light from a laser spreads out—or diffracts—from its source, but solitons do not diffract,” said Rechtsman. “They propagate forward through the glass at something like the speed of light maintaining a fixed width.”

The waveguides are created with repeating units in two dimensions. First, each individual waveguide—which is similar to an optical fiber—wiggles through the glass in a pattern of zigs and zags that repeat periodically along the direction of the traveling light. Second, groups of these fibers that are identical to each other repeat across the glass to either side of the laser beam.

In previous work with a comparatively low-powered laser, the researchers showed that as solitons propagated through the glass they could jump across the pattern of waveguides in multiples of whole numbers. They might move to the right by two units and forward one unit, which would be a change of two over one, or “positive two.” Or, for example, they could jump to the left one unit and forward one unit for a change of “negative one,” but the change was always an integer.

“Now, by increasing the power of the laser, we are seeing fractional changes,” said Rechtsman. “So, the soliton might move over by one unit while moving forward two—a change of one over two, or one-half. What’s interesting is that even though electrons and photons are completely different particles and the properties we are measuring are entirely different, in both cases as we force the particles to interact more and more strongly we see fractionalization. Unfortunately, knowing this is not going to automatically make fiber optic cables better, but seeing this emergent property in light, which is reminiscent of the emergent property seen in electrons, is helping us to better understand new emergent phenomena in complex physical environments.”

A paper describing the experiments appears Jan. 12 in the journal Nature Physics.