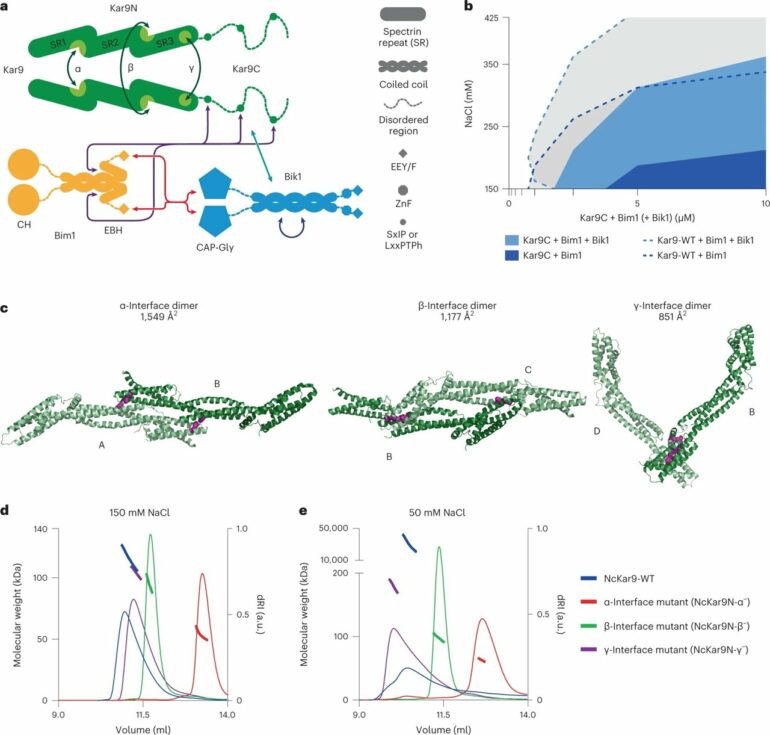 Researchers from Paul Scherrer Institute PSI and ETH Zurich have discovered how proteins in the cell can form tiny liquid droplets that act as a smart molecular glue. Clinging to the ends of filaments called microtubules, the glue they discovered ensures the nucleus is correctly positioned for cell division. The findings, published in Nature Cell Biology, explain the long-standing mystery of how moving protein structures of the cell’s machinery are coupled together.

Couplings are critical to machines with moving parts. Rigid or flexible, whether the connection between the shafts in a motor or the joints in our body, the material properties ensure that mechanical forces are transduced as desired. Nowhere is this better optimized than in the cell, where the interactions between moving subcellular structures underpin many biological processes. Yet how nature makes this coupling has long baffled scientists.

Now researchers, investigating a coupling crucial for yeast cell division, have revealed that to do this, proteins collaborate such that they condense into a liquid droplet. The study was a collaboration between the teams of Michel Steinmetz at Paul Scherrer Institute PSI and Yves Barral at ETH Zurich, with the help of the groups of Eric Dufresne and Jörg Stelling, both at ETH Zurich.

By forming a liquid droplet, the proteins achieve the perfect material properties to ensure biological function. This discovery is just the beginning of a new understanding of the role smart liquids play in the cell, believes Barral, whose research group is investigating the process of cell division in yeast.

“We are finding out that liquids composed of biomolecules can be extremely sophisticated and show a much broader variety of properties than we are used to from our macroscopic point of view. In that respect, I think we will find that these liquids have impressive properties that have been selected by evolution over 100s of millions of years.”

The study focuses on a coupling that occurs at the ends of microtubules—filaments that criss-cross the cell’s cytoplasm and have an unsettling resemblance to alien tentacles. These hollow tubes, formed from the building block tubulin, act as towropes, transporting various cargo across the cell.

Microtubules receive one of their most critical cargo during cell division. In yeast, they have the important job of dragging the nucleus, containing the dividing chromosomes, between mother and budding daughter cell. To do this, the microtubule must connect, via a motor protein, to an actin cable anchored in the cell membrane of the emerging daughter cell.

The motor protein then walks along the actin cable, pulling the microtubule into the daughter cell until its precious cargo of genetic material reaches its intended destination between the two cells.

This coupling—essential for cell division to proceed—must withstand the tension as the motor protein walks and enable the nucleus to be delicately maneuvered.

Michel Steinmetz, whose research group at PSI are experts in the structural biology of microtubules, explains: “Between microtubule and motor protein, there needs to be a glue. Without it, if the microtubule detaches, you will end up with a daughter cell with no genetic material that will not survive.”

In yeast, three proteins, which form the core of the so-called Kar9 network, decorate the microtubule tip in order to achieve this coupling. How they achieve the necessary material properties seemed to contradict traditional understanding of protein interactions.

One question that had long intrigued scientists was how the three core Kar9 network proteins stay attached to the microtubule tip even when tubulin subunits are added or removed: equivalent to the hook at the end of a towrope remaining in place whilst adjacent sections of rope are inserted or snipped off. Here, their discovery provides an answer: as a drop of liquid glue would cling to the end of a pencil, so this protein ‘liquid’ can cling to the end of the microtubule even as it grows or shrinks.

The researchers discovered that to achieve this liquid property, the three core Kar9 network proteins collaborate through a web of weak interactions. As the proteins interact at a number of different points, if one interaction fails, others remain and the ‘glue’ largely persists. This imparts the flexibility required for the microtubule to stay attached to the motor protein even under tension, the researchers believe.

To make their discovery, the researchers methodically probed the interactions between the three protein components of the Kar9 network. Based on structural knowledge obtained at the Swiss Light Source SLS in previous studies, they could mutate the proteins to selectively remove interaction sites and observe the effects in vivo and in vitro.

In solution, the three proteins came together to form distinct droplets, like oil in water. To prove that this was occurring in yeast cells, the researchers investigated the effect of mutations on cell division and the ability of the proteins to track the end of a shrinking microtubule.

“It was fairly straightforward to prove the proteins were interacting to form a liquid condensate in vitro. But it was a huge challenge to provide compelling evidence that this is what was happening in vivo, which took us several years,” explains Steinmetz, who first postulated the idea of a ‘liquid protein glue’ for microtubule-tip binding proteins together with a colleague from the Netherlands in a 2015 review publication.

Not your bog-standard multipurpose glue

Barral is struck by how sophisticated the glue is. “It is not just a glue, but it is a smart glue, which is able to integrate spatial information to form only at the right place.” Within the complex tangle of identical microtubules in the cell cytoplasm, just one microtubule receives the droplet that enables it to attach to the actin cable and pull the genetic information into place. “How nature manages to assemble a complex structure on the end of just one microtubule, and not others, is mindboggling,” he emphasizes.

The researchers believe that the liquid property of the proteins plays an important role in achieving this specificity. In the same way that small oil droplets in a vinaigrette fuse together, they hypothesize that small droplets initially form on many microtubules, which somehow subsequently converge to form one larger droplet on a single microtubule. How exactly this is achieved remains a mystery and is the subject of investigations in the Steinmetz and Barral teams.