The Donnan potential, revealed at last 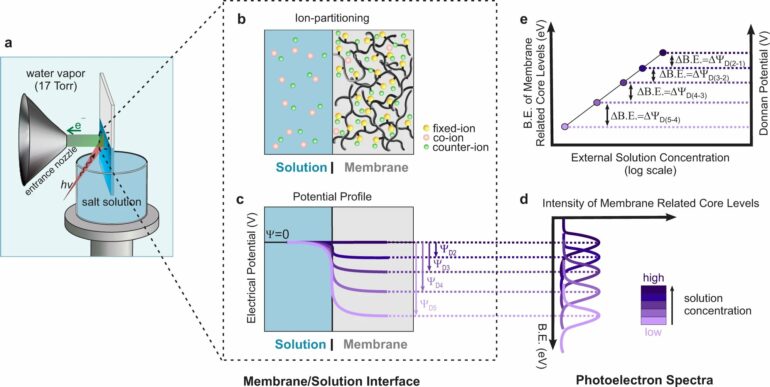 The Donnan electric potential arises from an imbalance of charges at the interface of a charged membrane and a liquid, and for more than a century it has stubbornly eluded direct measurement. Many researchers have even written off such a measurement as impossible.

But that era, at last, has ended. With a tool that’s conventionally used to probe the chemical composition of materials, scientists at the Department of Energy’s Lawrence Berkeley National Laboratory (Berkeley Lab) recently led the first direct measurement of the Donnan potential.

“We were naïve enough to believe we could do the impossible,” said Ethan Crumlin, a staff scientist at Berkeley Lab’s Advanced Light Source (ALS), which generated the bright X-rays used in the experiment. Crumlin and his collaborators recently reported the measurement in Nature Communications.

Such a measurement could yield new insights in many areas that focus on membranes. The Donnan potential plays a critical role in transporting ions through a cellular membrane, for example, which ties it to biological functions ranging from muscle contractions to neural signaling. Ion exchange membranes are also important in energy storage strategies and water purification technologies.

“Knowing the Donnan potential is relevant to many applications, from energy to biology, to water treatment,” said Pinar Aydogan-Gokturk, an early career scientist and postdoctoral scholar at Berkeley Lab who performed the measurements.

Aydogan-Gokturk said the new measurement will also improve previous thermodynamic models of the Donnan equilibrium. Those models have long relied on uncertain assumptions and indirect measurements. “Using our method, we are hoping to be able to answer questions about fluid dynamics in non-ideal conditions at the membrane interfaces,” she said.

Frederick Donnan, a British-Irish chemist, first probed the phenomenon in the early 20th century using a solution of Congo red, a dye that’s now known to be toxic and carcinogenic to many organisms. In a paper published in 1911, Donnan described experiments in which a membrane separated two charged solutions and only allowed some ions to pass through. As the two solutions reach equilibrium, he found, they may also scatter charges unevenly across the membrane—and therefore produced an electric potential.

The Donnan potential plays a role in any system that brings together a material with fixed ions—like a charged polymer or the membrane of a cell—and an electrolyte solution. The charges in the solution are free to move, and some can pass into the membrane.

To make the measurement, Aydogan-Gokturk, Crumlin, and their collaborators at the University of Texas at Austin’s Center for Materials for Water and Energy Systems used a technique called “tender” ambient pressure X-ray photoelectron spectroscopy, or tender-APXPS.

It’s a sophisticated application of X-ray photoelectron spectroscopy, or XPS, which can reveal the chemical composition, and lesser known (but just as important) local potentials of the surface of a material. When X-rays are focused on the materials’ surface, they trigger the release of electrons, and the energy levels of those electrons give away the constituent atoms. In 1981, Swedish physicist Kai Siegbahn won the Nobel Prize in Physics for work on using XPS.

Surface spectroscopy tools like XPS typically require vacuum environments to work, but pioneering work at Berkeley Lab led to the use of XPS at ambient pressure. About 10 years ago, ALS scientists pushed the technology further, combining ambient pressure XPS with higher-energy X-rays. That advance allowed them to probe solid-liquid interfaces.

“Until recently, Berkeley Lab’s ALS was the only place in the world where you could do this with a solid-liquid interface,” said Crumlin.

During the pandemic, Crumlin, Aydogan-Gokturk, and their team collected time intensive spectroscopic data sets to probe the Donnan potential. They immersed a charged membrane in a salt solution, fired X-rays at the interface, and studied the electrons that emerged. To help validate the experiments, Berkeley Lab Staff Scientist Jin Qian compared the measured Donnan potential values to simulated thermodynamic models.

A tool that’s usually used to probe chemical composition may not seem like an obvious instrument for studying membranes, but Crumlin predicted that using tender-APXPS in membrane science will continue to reveal new insights about interfacial phenomena.

“The membrane community is a totally new world to this space of science,” he said. “This work really combines two worlds together.”