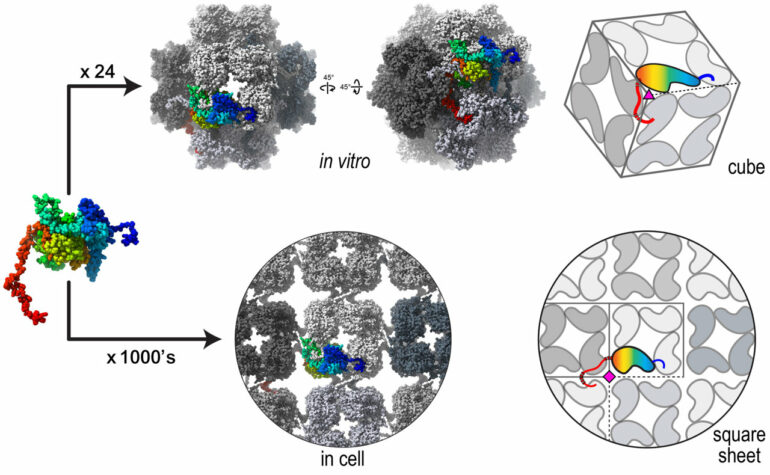 Viruses are tiny packets of destruction and there are more of them than any other biological entity on the planet.

Luckily, only a few hundred are known to make people sick, and figuring out what makes those viruses tick can help prevent illness. What’s more, examining the way viruses have evolved to infect mammals can perhaps even answer basic questions about human health.

A study from a team at University of Michigan Medical School takes a closer look at a virus that causes tumors in monkeys, called SV40. SV40 is a DNA virus that burrows into a cell and then into its nucleus, thereby infecting it, in order to make more of itself.

“SV40 is used as a tool for understanding how viruses that cause cancer in humans work,” said Chelsey Spriggs, Ph.D., assistant professor, Cell & Developmental Biology and Microbiology & Immunology at U-M Medical School, Research Assistant Professor at the U-M Life Sciences Institute, and first author of the study. Several viruses have been tied to cancer in people, including human papillomavirus, Kaposi Sarcoma-associated Herpesvirus and Epstein-Barr virus.

The study team wanted to more fully understand how this infection process happens inside the cell. An earlier study from Spriggs (at the time a postdoctoral fellow in the lab of Billy Tsai, Ph.D., the Corydon Ford Collegiate Professor of Cell & Developmental Biology), and their team found that SV40 travels from the surface of the cell, through the endosome, the endoplasmic reticulum, and then to the cytosol, where it is partially disassembled. The latest study illuminates the final and most important step for infection, entry into the nucleus.

Now published in PLOS Pathogens, the new study found that SV40 uses the nuclear pore complex and another protein complex called LINC, which connects the inner and outer membranes of the nucleus, first disassembling itself into a smaller package made up of two proteins and the virus’s genome. Unlike many other viruses that grab onto fingerlike projections sticking out from the nuclear pore complex, SV40 interacts with LINC first before entering it.

This difference in technique might underlie SV40’s ability to cause cancer, Spriggs notes. Further research into how SV40 exploits LINC and the nuclear pore complex could even help scientists understand how the two important cellular membrane complexes interact with each other, which so far is somewhat of a mystery.

“Viruses use a lot of the same pathways that are disrupted in cancers and other diseases,” said Spriggs. “Studying them is good for understanding human biology.”

Spriggs recently opened her own independent research lab at the University of Michigan, studying the entry mechanism of human oncogenic viruses.

Ankylosaurs battled each other as much as they fought off T. rex

Additional authors on this paper include Grace Cha and Jiaqian Li.


Citation:
The unique way this virus sneaks into a cell’s nucleus could advance the study of cancer-causing pathogens (2022, October 18)