To track disease-carrying mosquitoes, researchers tag them with DNA barcodes 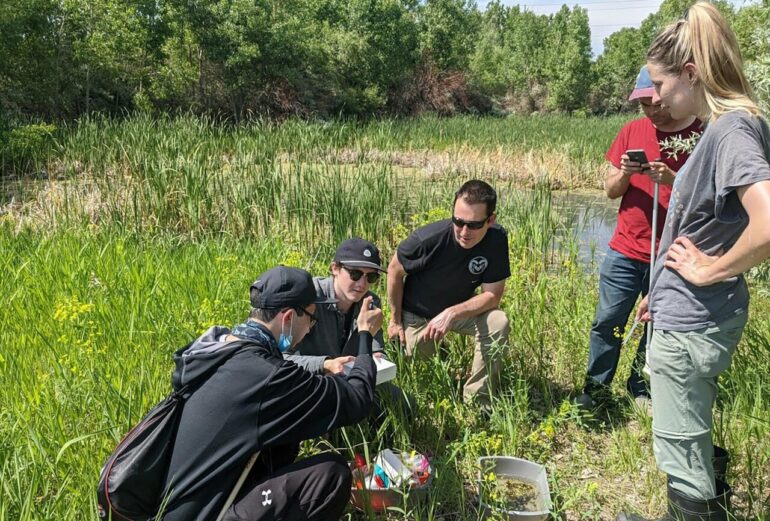 West Nile, Zika, dengue and malaria are all diseases spread by bites from infected mosquitoes. To track the threat of such diseases over large populations, scientists need to know where the mosquitoes are, where they’ve been, and where they might go.

But take it from Rebekah Kading, a Colorado State University researcher who studies mosquito-borne arboviruses: tracking mosquitoes is no easy task. The capture, tagging and release of single mosquitoes—as is commonly done with bats and other disease carriers—would be ridiculous, if not impossible. A common mosquito-tracking technique involves dousing the insects in fluorescent powder and letting them fly away, but the practice is error-prone and unreliable.

Thanks to a collaboration with CSU engineers, Kading and colleagues are now introducing a better way to perform mosquito-tracking for disease applications. Their new method, which involves getting larval mosquitoes to eat harmless particles made entirely of DNA and proteins, has the potential to revolutionize how people study mosquito-borne diseases.

The edible mosquito marker particles are the work of Chris Snow, associate professor in the Department of Chemical and Biological Engineering. For the last several years, Snow’s team has been developing microscopic, porous protein crystals that self-assemble from a protein originally found in Camplyobacter jejuni bacteria. Since inventing these very small, non-toxic protein crystals that feature highly precise arrays of pores, Snow’s team has been exploring diverse applications for them, like capturing virus particles to facilitate wastewater testing.

Years ago, they discovered they could insert fluorescent dyes or synthetic DNA into their crystals very easily, and the DNA wouldn’t budge even after multiple washes and exposure to solvents. “By pure accident, we found a material that holds onto nucleic acids very, very tightly,” Snow said. He started to think these DNA snippets could act like “barcodes” inside the porous crystals, providing unique fingerprints of information.

Kading, who is an associate professor in the Department of Microbiology, Immunology and Pathology, heard about Snow’s research and thought: Could these little engineered crystal barcodes be used in a mosquito-tagging application? Kading and Snow had coffee and talked.

That was 2017. Since then, the collaboration that now affectionately calls itself the “Dark Crystal” team has performed a series of experiments that demonstrate the utility of Snow’s barcodes as tags capable of labeling millions of individual mosquitoes. So far, results are promising.

Here’s how they do it: mosquito larvae ingest tasty biomass that’s pre-loaded with the DNA crystals in solution. As the mosquitoes grow into adults, the DNA crystals remain intact in their guts, creating a code that can be later read through laboratory techniques like quantitative polymerase chain reaction.

The researchers describe the details in a recently published paper in PNAS Nexus. In summer 2020 and 2021, the team tried the mosquito-tagging crystals at small pilot sites in eastern Fort Collins. The following summer, Kading’s team repeated the experiments in other areas of the city and are now analyzing those results.

The method the researchers are demonstrating is unique in one important way: Unlike conventional mosquito-tagging in which adult mosquitoes are extracted from traps and analyzed for disease, the DNA barcodes are ingested by the mosquitoes in their larval states, persisting with them as they become adults. In this way, researchers can not only track where the mosquitoes ended up, but where they started, and how they moved. Such insights could prove critical for disease-surveillance applications in the future, Kading said.

“We could have a map on the landscape of mosquitoes being produced in a certain area,” Kading said. “We could identify hotspots for mosquito production. I think this would add a whole other dimension of knowledge to the real-time mosquito surveillance and control operations that are already in place.”

Snow, for his part, is fascinated by the idea that his engineered protein crystals could be used in a disease-surveillance application like Kading’s. “It’s nice because it’s a little bit weird,” he said. “It’s creative—I have never seen anybody try anything similar. And that’s a fun spot to be in—to be doing something useful, but also completely unprecedented.”

Research team looks to past for insights on future of megafauna

Because they are only using snippets of synthetic DNA, the researchers can include thousands of barcodes per mosquito batch, meaning thousands of individual signatures. Kading wants to experiment with a temporal component of tagging: Having mosquito larvae ingest different barcodes every week, so the researchers can tell not only where the mosquitoes started and ended up, but also, when they ate which barcodes. She is also looking to expand the experiments into tropical environments, where mosquito-borne diseases are a daily threat.

Using DNA protein crystals to tag mosquitoes has a lot of potential, but like all good scientists, the team has a lot more questions to answer. For one thing, they’re not exactly sure why the DNA snippets persist so well in the mosquito guts. They also want to know how long the barcodes last in the mosquito gut, and if there are ways to boost performance, perhaps by engineering the crystals to be even stickier. Finally, scalability is a big factor. The technology could work in the lab, but what about in a commercial application?

Kading, Snow and their teams are looking forward to finding the answers together. “This has been a great interdisciplinary collaboration,” Kading said. “It’s been fun learning from each other and interacting with completely different disciplines.”