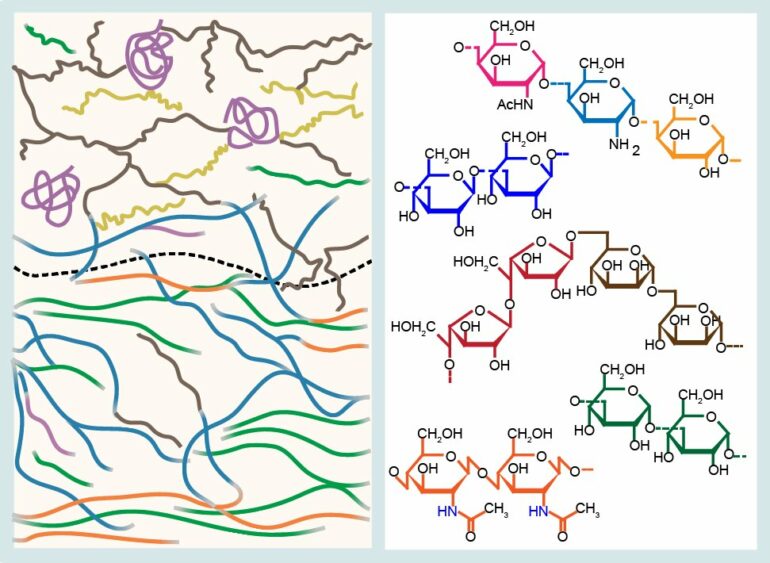 In a new study published in Nature Communications, Associate Professor Tuo Wang and his research team from the Department of Chemistry at Louisiana State University revealed the molecular architecture of fungal cell walls and the structural responses to stresses, aiding the development of antifungal drugs targeting cell wall components.

Life-threatening fungal infections impact the health of millions of humans across the globe each year. With the limited efficacy of commercially available drugs, the need for novel antifungal compounds is on the rise.

The Wang research team examined the structural dynamics of fungal polysaccharides and their responses to cell wall stress. Specifically, the team examined the cell wall of Aspergillus fumigatus, a fungal pathogen that causes life-threatening disease in immunocompromised individuals.

The research team coupled its expertise in solid-state nuclear magnetic resonance spectroscopy with a functional genomics approach using multiple mutants of Aspergillus fumigatus, each of which selectively eliminates a single type of structural carbohydrate at one time.

“This research strategy allowed us to evaluate the structural role of each major carbohydrate by tracking the changes in cell wall structure after the removal of a component,” Wang said. “The spectroscopy method provided atomic resolution on the structure of polysaccharides and associated proteins using intact fungal cell walls free from any treatment that might perturb the native status of these biomolecules.”

The data led to the development of a revised model of fungal cell wall organization and the assembly of five categories of polysaccharides, including chitin, β-glucan, mannan, α-glucan, and galactosaminogalactan. The findings confirmed an overlooked but prominent role of α-glucans in the cell wall structuration. The mutants produce stiffer and more water-proof cell walls for better protection, which might be a general mechanism used by these microbes to handle stresses.

The research involved an interdisciplinary collaboration with scientists from Institut Pasteur in France, University of Crete in Greece, as well as the Guangxi Academy of Sciences and Chinese Academy of Sciences in China. Scientists involved in this study also utilized instrumentation at the National Science Foundation’s National High Magnetic Field Laboratory in Tallahassee, Fla.

“Now that we revealed the structural principles used by fungi to respond to cell wall defects, it is time to explore how fungi reconstruct this carbohydrate armor to survive through antifungal treatments and severe environments,” said Wang.

Their findings and methodology may open a new research avenue of looking at these complex biomaterials in many different pathogenic fungal species and assessing the mode of actions of novel antifungal molecules, which will assist in the combat against invasive fungal infections.