Buckyballs on DNA for harvesting light 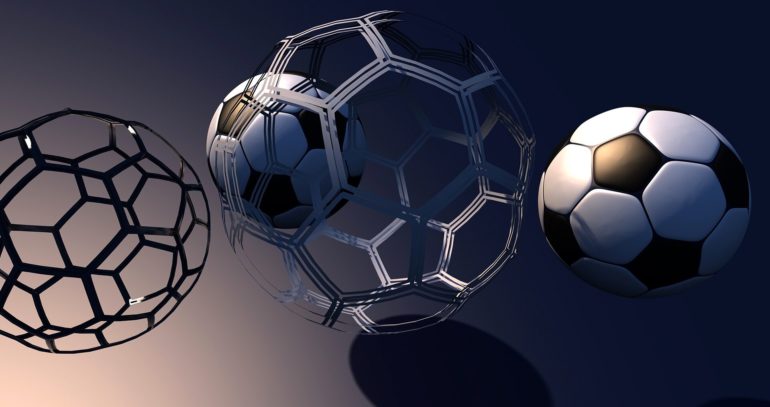 Organic molecules that capture photons and convert these into electricity have important applications for producing green energy. Light-harvesting complexes need two semiconductors, an electron donor and an acceptor. How well they work is measured by their quantum efficiency, the rate by which photons are converted into electron-hole pairs.

Quantum efficiency is lower than optimal if there is “self-quenching”, where one molecule excited by an incoming photon donates some of its energy to an identical non-excited molecule, yielding two molecules at an intermediate energy state too low to produce an electron-hole pair. But if electron donors and acceptors are better spaced out, self-quenching is limited, so that quantum efficiency improves.

In a new paper in Frontiers in Chemistry, researchers from the Karlsruhe Institute of Technology (KIT) synthesize a novel type of organic light-harvesting supramolecule based on DNA. The double helix of DNA acts as a scaffold to arrange chromophores (i.e. fluorescent dyes)—which function as electron donors—and “buckyballs”—electron acceptors—in three dimensions to avoid self-quenching.

“DNA is an attractive scaffold for building light-harvesting supramolecules: its helical structure, fixed distances between nucleobases, and canonical base pairing precisely control the position of the chromophores. Here we show that carbon buckyballs, bound to modified nucleosides inserted into the DNA helix, greatly enhance the quantum efficiency. We also show that the supramolecule’s 3-D structure persists not only in the liquid phase but also in the solid phase, for example in future organic solar cells,” says lead author Dr. Hans-Achim Wagenknecht, Professor for Organic Chemistry at Karlsruhe Institute of Technology (KIT).

DNA provides regular structure, like beads on a helical string

As scaffold, Wagenknecht and colleagues used single-stranded DNA, deoxyadenosine (A) and thymine (T) strands 20 nucleotides long. This length was chosen because theory suggests that shorter DNA oligonucleotides wouldn’t assemble orderly, while longer ones wouldn’t be soluble in water. The chromophores were violet-fluorescent pyrene and red-fluorescent Nile red molecules, each bound noncovalently to a single synthetic uracil (U)-deoxyribose nucleoside. Each nucleoside was base-paired to the DNA scaffold, but the order of pyrenes and Nile reds was left to chance during self-assembly.

For the electron acceptors, Wagenknecht et al. tested two forms of “buckyballs”—also called fullerenes—which are known to have an excellent capacity for “quenching” (accepting electrons). Each buckyball was a hollow globe built from interlocking rings of five or six carbon atoms, for a total of 60 carbons per molecule. The first form of buckyball tested binds nonspecifically to the DNA through electrostatic charges. The second form—not previously tested as an electron acceptor—was covalently bound via a malonic ester to two flanking U-deoxyribose nucleosides, which allowed it to be base-paired to an A nucleotide on the DNA.

The researchers confirmed experimentally that the 3-D structure of the DNA-based supramolecule persists in solid phase: a crucial requirement for applications in solar cells. To this end, they tested supramolecules with either form of buckyballs as the active layer in a miniature solar cell. The constructs showed excellent charge separation—the formation of a positive hole and negative electron charge in the chromophore and their acceptance by nearby buckyballs—with either form of buckyball, but especially for the second form. The authors explain this from the more specific binding, through canonical base-pairing, to the DNA scaffold by the second form, which should result in a smaller distance between buckyball and chromophore. This means that the second form is the better schoice for use in solar cells.

Importantly, the authors also show that the DNA-dye-buckyball supramolecule has strong circular dichroism, that is, it is much more reactive to left- than to right-handed polarized light, due to its complex 3-D helical structure—even in the solid phase.

In Apps and WebCompaniesComputer science
on 24 July 20217 min read

“I don’t expect that everyone will have solar cells with DNA on their roof soon. But the chirality of DNA will be interesting: DNA-based solar cells might sense circularly polarized light in specialized applications,” concludes Wagenknecht.