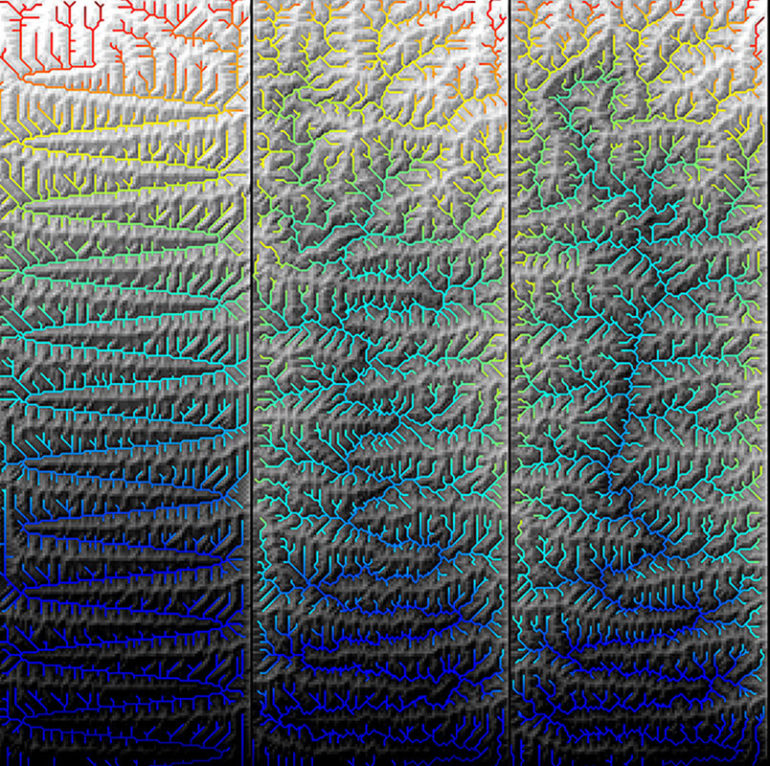 A new study by former University of Illinois Urbana-Champaign graduate student Jeffrey Kwang, now at the University of Massachusetts, Amherst; Abigail Langston, of Kansas State University; and Illinois civil and environmental engineering professor Gary Parker takes a closer look at the vertical and lateral—or depth and width—components of river erosion and drainage patterns. The study is published in the Proceedings of the National Academy of Sciences.

“A tree’s dendritic structure exists to provide fresh ends for leaves to grow and collect as much light as possible,” Parker said. “If you chop off some branches, they will regrow in a dendritic pattern. In our study, we wanted to find out if river systems behave similarly when their paths are altered, even though existing numerical models cannot replicate this.”

In a previous study conducted at Illinois, Parker and Kwang experimented with sandbox and waterflow landscape models with meandering, S-shaped streams imprinted onto them. With the water left running, the systems eventually rerouted the S-shaped channel into the ever-familiar dendritic pattern over time—something that the numerical models do not predict.

“That told us there was some key element missing in the numerical models,” Kwang said. “One thing I observed was that the channels in the model sandbox streams were migrating laterally, or across the landscape, to reorganize the drainage network. This lateral migration has been observed in other researchers’ experiments but is not captured by the numerical models. I thought that this has to be where the numerical and physical models differ.”

Soon after Parker and Kwang’s realization, Kwang and Langston met at the Summer Institute on Earth-Surface Dynamics at the St. Anthony Falls Laboratory at the University of Minnesota. They discovered a mutual interest in lateral stream erosion.

“Working through the existing river drainage models, Jeffrey and I found that the initial conditions in landscape evolution models have been overlooked,” Langston said. “Usually, they started with a flat, featureless surface with very small, randomized bumps. We wondered if introducing more complex initial conditions, like the meandering stream imprint Jeffrey used in his earlier experiment, would make a big difference in the numerical models.”

Incorporating these new ideas, the team created a landscape evolution model that simulates a river network with an initial S-shaped channel and vertical erosion. After running the model 5 million years into the future, the river carves a deep canyon that retains the S-shaped pattern, which is not very realistic, Kwang said.

At the 5 million-year mark, the team introduced to the model a vertical and lateral erosion scenario, developed by Langston and University of Colorado, Boulder professor Gregory Tucker. The channels begin to migrate and reorganize the river network into a more realistic dendritic pattern.

At the 10 million-year mark, the model starts to resemble a tree and continues to become more dendritic through to the end of the model at 15 million years.

The team plans to examine the role that sediment type and geologic features such as mountains, faults and fractures play in this process. There are places where the underlying geology has an enormous influence on drainage patterns, the researchers said, and accounting for them in the models is needed.

Understanding how rivers evolve naturally or rebound after engineering measures have rerouted them will help decision-makers plan future land use, the researchers said. “It is important to look ahead tens to hundreds or even thousands of years when planning the storage of toxic waste, for example,” Kwang said. “Lateral migration of nearby rivers could pose a significant threat over time.”

Thousands of Tons of Microplastics Are Falling from the Sky

“We’ve known about lateral migration of mountain rivers for years, but nobody thought to put it into a model and run it at hundreds to thousands to millions of years,” Parker said. “This was the first time that anyone has attempted this, and we are very excited about the results.”

More information:
Jeffrey S. Kwang et al, The role of lateral erosion in the evolution of nondendritic drainage networks to dendricity and the persistence of dynamic networks, Proceedings of the National Academy of Sciences (2021). DOI: 10.1073/pnas.2015770118