Cheap and easy $1 coronavirus test to undergo trials in Senegal 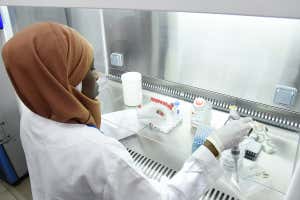 TRIALS to develop a $1 covid-19 testing kit that produces results in less than 10 minutes are under way in Senegal. If it works, the test could be a vital tool in sub-Saharan Africa.

Researchers at DiaTropix, an infectious disease testing facility run by the Pasteur Institute in Dakar, are working alongside UK-based company Mologic to manufacture the diagnostic kits.

The prototype is similar to a home pregnancy kit and can be used either to detect current infections through saliva antigens or previous infections by blood antibodies. The institute says it could be rolled out next month if the trials show it works well enough.

Can we be manipulated into sharing private info online? Yes, says study

In Apps and WebCybersecuritySmartphones
on 22 December 20208 min read

Amadou Sall, director of the Pasteur Institute in Dakar, said that 500 to 1000 tests a day could be analysed at the facility and that up to 4 million could be made annually. “There is no need for a highly equipped lab,” he says. “It is a simple test that can be done anywhere.”

Most coronavirus tests use a technique called polymerase chain reaction, or PCR, to detect sequences of viral RNA. Each test costs hundreds of dollars and takes several hours to process using sophisticated equipment. The team behind the new pocket-sized test say it would be much cheaper and easier to distribute across sub-Saharan Africa.

“Existing systems are not fit for purpose,” says Joe Fitchett at Mologic. Testing regimes that are decentralised and not required to turn a profit are…