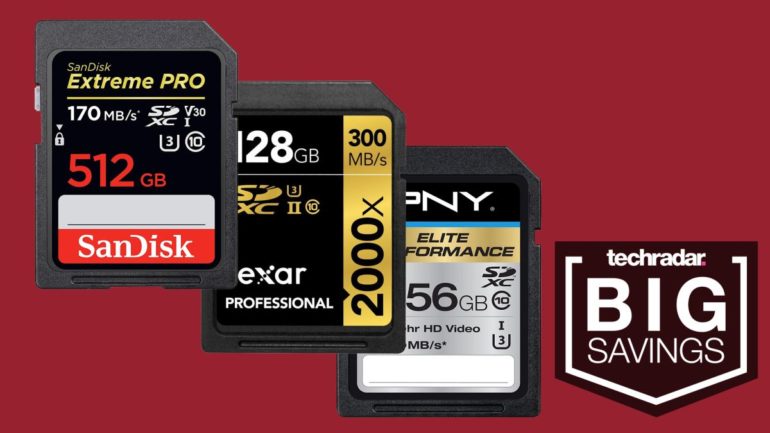 Picking up a cheap SD card deal during the Prime Day sales can save you a stack of money on those essential camera accessories. At this time of year you get more GB for your money.

These are the full-sized SDXC cards, supported by most drones, DSLR cameras and mirrorless cameras, and they’re perfect for capturing large quantities of raw images, and 4K and HD video footage. Simply, if you have a camera or drone, you’ll need an SD card or two to actually capture images.

While SD card deals are quite common, you save much more money during sales like Prime Day, as they tend to be much cheaper during this type of event. Top manufacturers like Sandisk, Lexar, and PNY all take part, and you can save around 50% on some cards.

You can’t always choose the cheapest one, though, if you need it for more high-performance use. Getting more GB per dollar is a big advantage of picking up a cheaper deal on the best SD cards, but getting a quicker card for less is often a more pressing need.

Before you get into the SD deals below, consider this: each card will have a speed rating for burst shooting (write speed) and file transfer rate. Transfer rate is, well, the time it takes for files to copy from SD card to laptop. The shooting rate or write speed refers to the capacity of the card to support longer burst shoots on your camera. If you plan to take extended bursts with raw files on enthusiast and pro-level cameras, look for 90MB/s write speeds or higher, to make sure your SD card can keep up.

Not in the US? Scroll down for the best deals in your region.

Lexar Professional 256GB SDXC card: $99.99 $52.99 at Amazon
You’re getting this for nearly half price, which is a great deal considering the performance of the Lexar Professional SDXC card. This has read speeds of around 250MB/s, which saves loads of time on photography workflow, and writes around 120MB/s, which is fantastic. It’s compatible with UHS-II and I devices, so works on older tech too.View Deal

Lexar Professional 128GB SDXC card (twin pack): $84 $51.49 at Amazon
You’re saving 40% on this twin pack of 128GB cards. We’d recommend getting two 128GB cards over a single 256GB SDXC if you’re looking to stay organized with your photos – you can keep projects on separate cards, especially if your camera supports dual-SD slots, which most enthusiast-level and above devices do. It’s also a little cheaper than the equivalent 256GB Lexar SD card.View Deal

PNY Elite 256GB SDXC card: $90 $31.49 at Amazon
You’re saving an impressive 65% on this SD card from PNY. You get good enough speed on here for limited burst shooting and 4K video recording on DSLR and mirrorless cameras, which is what you’re likely using it for. It’s tough, too, with proofing against shock, water, magnets, and extreme temperatures.View Deal

PNY Elite 512GB SDXC card: $79.99 $59.99 at Amazon
Save $20 on this larger capacity SD card from PNY. This card is durable enough to be used in most conditions, and comes with weather, shock, and magnet proofing as standard. There are quicker cards out there, but this is excellent value for most photo and data use.View Deal

Lexar Professional 2000x card 64GB: $99.99 $54.99 at Amazon
Save 45% on this premium SDXC card. If you’re working with 4K video files or large numbers of RAW images, the read and copy speeds on this card are tough to beat at 300MB/s. It comes with a lifetime warranty too, which does offset the higher cost for the 2000x series.View Deal

Lexar Professional 2000x card 128GB: $179.99 $95.99 at Amazon
This larger Lexar 2000x series card is 46% off, which makes it far more affordable for anyone working with large, 4K video files. The extreme 300MB/s read speed is what you’re paying big bucks for here, so it’ll suit a professional rather than an amateur. There’s a lifetime warranty on the Pro 2000x series from Lexar, so that tells you about the quality of this SDXC card.View Deal

SanDisk Extreme Pro 512GB SDXC card: $158 $119.99 at Amazon
You’re getting a great deal on this high-performance SDXC card from SanDisk. Supporting burst shooting speeds of 90MB/s and 4K video capture, the Extreme Pro will suit almost all users for all situations. It is thoroughly weather- and shock-proofed, comes with a lifetime guarantee, and will transfer files extremely quickly (170MB/s) from card to host device.View Deal

SanDisk Extreme Pro 1TB SDXC card: $399 $280 at Amazon
You’re saving 30% on this massive SDXC card. It’s an impressive card, with 150MB/s transfer speeds and 90MB/s shooting speeds, for high-quality burst shots. SanDisk’s cards are tough cookies too, and are temperature, shock, X-ray, and magnet proof, so they’re perfect for photography in all conditions. There’s even a lifetime warranty to temper that eye-watering price.View Deal

SanDisk Extreme 256GB SDXC card: $52 $43.99 at Amazon
If you need a solid SDXC card for shooting in all weathers, the SanDisk Extreme 256GB is perfect. It offers shooting speeds of 70MB/s, which is fine for enthusiast and beginner cameras, and you get 150MB/s transfers for quick workflow. There’s a lifetime warranty on this, and it’s tested to withstand all weathers. This is a good price for what you get.View Deal

SanDisk Ultra 256GB SDXC card: $44.99 $33.29 at Amazon
You save 24% on this budget SDXC card from SanDisk. Sure, you’re not getting the same burst shooting capacity as higher-priced models, but this is perfect for beginner cameras, and anyone who primarily uses their cameras for single shot and long exposure. It comes with a 10-year warranty too. View Deal

Performance and capacity are the most important things to look for in SD cards, along with price. If you’re wondering about capacity, here’s an example. If you’re shooting with a 128GB card in your camera, and you’ve got a 22MP resolution camera capturing in the raw format (so, about 6-7MB per image) then you’ll get about 19,000 images on a single card. For beginners and enthusiasts, that’s more than enough – your battery will need charging several times before you need to replace the card or remove images from it.

If you’re shooting HD quality video on that same 128GB card, you’ll get about 650 minutes on a single SDXC, shot at 24Mbps. So, if 4K video is your game, you should definitely be looking to get something at 256GB or above to avoid having to constantly edit the contents of your card.

In terms of dollars per GB, that depends entirely on the quality of card you’re looking to buy. Budget cards will get you 256GB for $40-50, so that’s about 5GB per dollar. If you want something with a better write speed, you’ll get 256GB for around $100, which is only 2.5GB per dollar. There are even more expensive cards than that, which can bump it down to 2GB or less per dollar.

Looking for more SD card deals? You’ll find all the lowest prices from around the web right here, with offers available in your region.

TechRadar is rounding up all the top deals over the Prime Day sales period, and we’ve put all the best Prime Day deals in an easy-to-navigate article to help you find the bargains you’re looking for.