Child protective services do work, but they are unevenly distributed 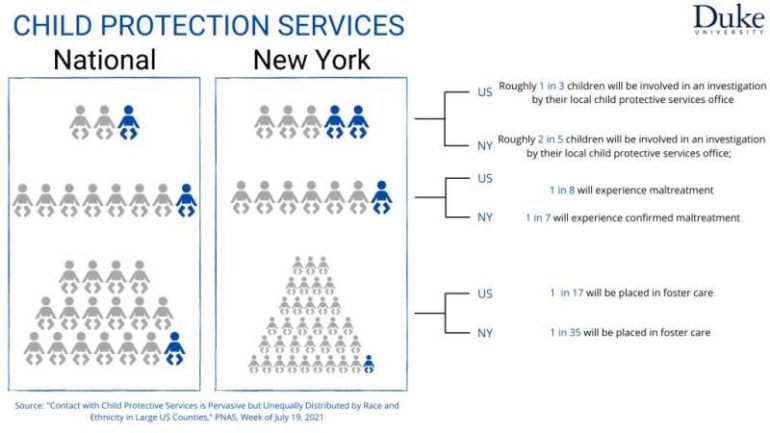 Roughly one in seven New York City children suffer confirmed mistreatment at home and many are placed in foster care. But relatively few children are permanently separated from their parents by the termination of parental rights, according to new research from Duke University and Rutgers University-Newark.

The data points to a relative success story in the world of child welfare, said Chris Wildeman, a Duke University sociologist and co-author of the research. In New York City, child welfare specialists intervene often in abuse and neglect cases but are often able to avoid terminating parental rights, even when they do remove the child from the home, Wildeman added.

Wildeman’s co-authors are Kieran Healy, a Duke sociologist, and Frank Edwards and Sara Wakefield from the School of Criminal Justice at Rutgers University—Newark.

“I think the core takeaway there is that New York is the prime example of taking maltreatment seriously and intervening as a system,” Wildeman said. “But also taking seriously the idea that permanent termination of parental rights totally closes off any chance for family reunification, so only doing it in the most extreme circumstances.”

The peer-reviewed study, appearing the week of July 19 in the Proceedings of the National Academy of Sciences, derives from an analysis of child welfare data from the nation’s 20 most populous counties. (The New York data is from all five boroughs because the entire city’s child welfare system is under a single governing umbrella)

The study looked at how often children were the subject of a child services investigation; suffered confirmed mistreatment, were placed in foster care, and removed permanently from their homes through the termination of parental rights.

Nationally, roughly one in three children will be involved in an investigation by their local child protective services office; one in eight will experience maltreatment, one in 17 will be placed in foster care and one in 100 will have parental rights terminated, according to the study.

In New York City, roughly two in five children will be involved in an investigation by their local child protective services office; one in seven will experience confirmed maltreatment, one in 35 will be placed in foster care and one in 600 will have parental rights terminated, according to the study.

“The system is functioning more the way many child welfare advocates would like it to function,” Wildeman said. “Make sure you identify maltreatment, but attempt to use services rather than foster care treatment, at least initially, and then only terminating parental rights in only the most extreme circumstances. And trying to be aware of racial disparities in those processes.”

More information:
Frank Edwards et al, Contact with Child Protective Services is pervasive but unequally distributed by race and ethnicity in large US counties, Proceedings of the National Academy of Sciences (2021). DOI: 10.1073/pnas.2106272118