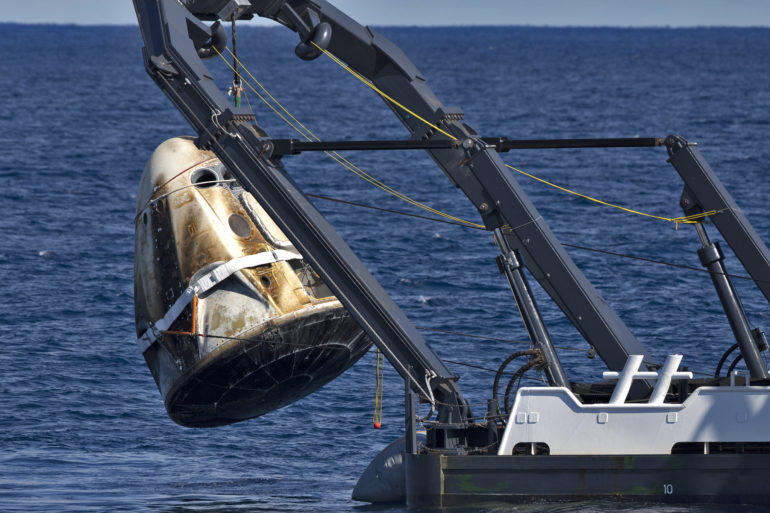 The investigation into the destruction of SpaceX’s astronaut taxi last month is proceeding apace.

On April 20, a Crew Dragon capsule exploded during a routine “static fire” test of the craft’s emergency-escape thrusters at Cape Canaveral Air Force Station in Florida. Nobody was hurt, but the spacecraft — which in March successfully flew an uncrewed test mission to the International Space Station (ISS) called Demo-1 — was lost.

SpaceX and NASA have managed to clean up the accident site and are now focusing on what caused the mishap, agency officials announced today (May 28).

“Teams have completed work to ensure the site is safe and are focusing on the root-cause analysis, which will determine the impact to commercial crew” flight tests, NASA officials wrote in an update.

SpaceX holds a multibillion-dollar deal to fly NASA astronauts to and from the ISS using Crew Dragon and the company’s Falcon 9 rocket.

SpaceX and NASA aim to launch astronauts to the orbiting lab aboard Crew Dragon before the end of the year. SpaceX just needs to check off another key milestone first: an in-flight abort test, which is an uncrewed mission designed to show that the capsule’s SuperDraco escape thrusters can rocket Crew Dragon to safety in the event of a launch emergency.

After that will come Demo-2, a test mission that will send two astronauts to the ISS. Operational, contracted flights will follow Demo-2.

The Crew Dragon that was lost in last month’s accident had been slated to fly the in-flight abort mission. So, SpaceX has to rejigger its capsule assignments.