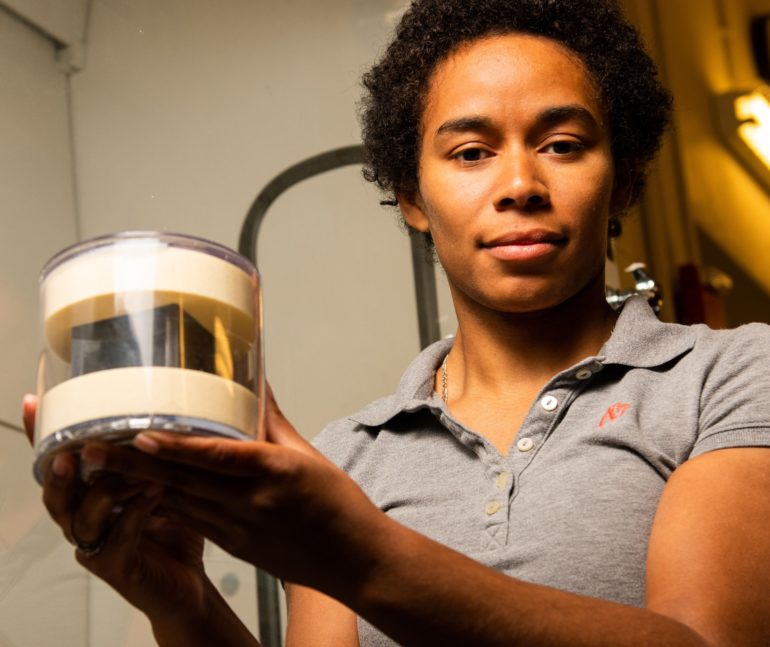 During World War II, Nazi Germany and the U.S. were racing to develop nuclear technology. Before Germany could succeed, Allied forces disrupted the program and confiscated some of the cubes of uranium at the heart of it. The ultimate fate of most of that uranium is unknown, but a few cubes thought to be associated with the program are in the U.S. and Europe. Today, scientists report initial results from new methods being developed to confirm their provenance. The techniques might also help with investigations into illicit trafficking of nuclear material.

The researchers will present their results at the fall meeting of the American Chemical Society (ACS).

One cube is at Pacific Northwest National Laboratory (PNNL), but no one is sure how it got there, says Jon Schwantes, Ph.D., the project’s principal investigator. Through collaborators, including Timothy Koeth, Ph.D., at the University of Maryland, the lab also has access to a few other cubes. “We don’t know for a fact that the cubes are from the German program, so first we want to establish that,” Schwantes says. “Then we want to compare the different cubes to see if we can classify them according to the particular research group that created them.”

In the early 1940s, several German scientists were competing to exploit nuclear fission to produce plutonium from uranium for the war. The teams included Werner Heisenberg’s group in Berlin (later moved to Haigerloch to try to avoid Allied troops) and Kurt Diebner’s team at Gottow. Uranium cubes were produced to fuel nuclear reactors at these sites. Measuring about 2 inches on each side, hundreds of the cubes were hung on cables submerged in “heavy” water, in which deuterium replaces lighter hydrogen. The scientists hoped radioactive decay of the uranium in the assemblies would unleash a self-sustaining nuclear chain reaction—but the design failed.

U.S. and British forces seized some of the Heisenberg uranium cubes at Haigerloch in 1945, and more than 600 of these cubes were shipped to the U.S. Some may have been used in the U.S. nuclear weapons effort—which was launched in part due to fears that Germany was developing nuclear weapons—and a few belong to collectors and sites including PNNL. The whereabouts of the others, including hundreds of Diebner cubes, are unknown.

PNNL uses its sample to help train international border guards and nuclear forensics researchers to detect nuclear material. It’s labeled as a Heisenberg cube, but support for that assertion is anecdotal, says Brittany Robertson, who is presenting the work at ACS Fall 2021. “We didn’t have any actual measurements to back up that claim,” says Robertson, a doctoral student who works at the lab. To prove the cube’s origins, she began modifying some analytical techniques to combine with Schwantes’ established forensic methods. Robertson turned to radiochronometry, the nuclear field’s version of a technique that geologists use to determine the age of samples based on radioactive isotope content.

When the cubes were first cast, they contained fairly pure uranium metal. As time passed, radioactive decay transformed some of the uranium into thorium and protactinium. Robertson is adapting a radiochronometry procedure to better separate and quantify these elements in PNNL’s cube. Their relative concentrations will show how long ago the cube was made. She is also refining this method to analyze rare-earth element impurities in the object. They could reveal where the original uranium was mined, which might indicate whether it was produced for the Heisenberg or Diebner group.

Meanwhile, Robertson and Schwantes are collaborating with PNNL’s Carlos Fraga, Ph.D., to test the cubes’ coatings, which the Germans applied to limit oxidation. The PNNL team recently discovered that the cube at the University of Maryland is coated in styrene—an unexpected finding since Heisenberg’s group used a cyanide-based coating. However, the team has now learned that some of the cubes from Diebner’s group, which used a styrene-based coating, were sent to Heisenberg, who was trying to amass more fuel for his reactor. “We’re curious if this particular cube was one of the ones associated with both research programs,” Schwantes says. “Also, this is an opportunity for us to test our science before we apply it in an actual nuclear forensic investigation.”

While the scientists are intrigued about working with material from the dawn of the nuclear age, these objects are undeniably linked to a horrific time in history. “I’m glad the Nazi program wasn’t as advanced as they wanted it to be by the end of the war,” Robertson says, “because otherwise, the world would be a very different place.”

Forensic investigation of uranium from German nuclear projects from the 1940s