A human footprint on the Pantanal inferno 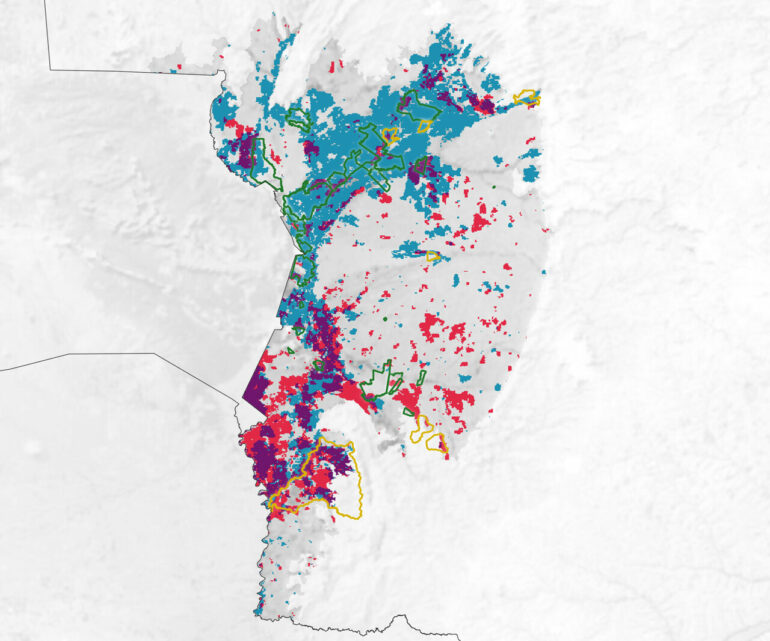 One of the world’s largest freshwater wetlands—the Pantanal—spreads across a bowl-shaped plain where Bolivia, Brazil, and Paraguay meet. During the rainy season in most years, floodwater drains from several swollen South American rivers into this vast inland delta, replenishing swamps and marshes. The region is home to thousands of plant and animal species, including rare and endangered jaguars, hyacinth macaws, and giant river otters.

But in both 2019 and 2020, with the region gripped by severe drought, those refreshing floodwaters never came. Come June and July, fires did instead. They burned sporadically at first, but by August and September, they raged with such ferocity that they left vast swaths of the Pantanal blackened. The fires blanketed cities near and far with a pall of smoke. The burning was severe in 2019, charring roughly 16,000 square kilometers (6,200 square miles). But in 2020, the scale was catastrophic, burning one-third of the whole biome. A remarkable 39,000 square kilometers (15,000 square miles) burned in 2020, an area about the size of Switzerland.

In the immediate aftermath of the 2020 fires, the simple explanation for the extensive fires was that unusually dry, hot weather had fueled them. But a new study led by NASA scientists suggests that human activity played a critical role in exacerbating them. The study was published in Scientific Reports in January 2022.

“It is certainly true that extreme heat and drought in 2020 worsened the fires, but that’s not the whole story,” said Sujay Kumar, a hydrologist at NASA’s Goddard Space Flight Center. “It is also clear, based on a range of data, that these fires would not have happened in the absence of human activity. We even saw a very specific pattern of fire activity that suggests people allowed or even encouraged fires to burn in forested areas.”

“With over 52 percent of natural areas burned compared to only 6 percent of regions with high-cattle density, it is clear that natural, not human-dominated landscapes were most affected by the 2020 fires,” said study co-author Niels Andela, a remote sensing scientist at Cardiff University. “The sensitivity of natural landscapes to fire-driven degradation has been a concern across the southern Amazon for years. With this research, we provide the first large-scale evidence that the same mechanisms may be applicable across the tropics, including in the Pantanal.”

The researchers also looked for signs that the fires may have changed the ecosystem in lasting ways. They examined the region’s hydrology—how water flows across the landscape—using a data assimilation model called the Land Information System. The LIS combines satellite- and ground-based observations with modeling techniques that characterize land surface conditions.

“Several months after the fire, we saw clear evidence of decreased evapotranspiration and more surface runoff, trends that can trigger or accelerate desertification,” said NASA hydrologist Augusto Getirana, one of the study’s co-authors. Scorched soils with less vegetation can mean less rainfall being soaked up by plants, more water and sediment running off the land into streams, and less moisture exchange with the air above. “All of this adds up to increased land degradation.”

Changes like these could cause new challenges for the region’s wildlife, which have already been hit hard by the burning and may struggle under new environmental conditions. One group of biologists that surveyed the Pantanal soon after the fires estimated that at least 17 million vertebrates were likely killed, including millions of snakes, rodents, and birds.

While conservation areas and indigenous territories have been set up to limit development in parts of the Pantanal, the human fingerprint on the landscape is sizable and growing. Another recent study estimated that the amount of the Pantanal devoted to agriculture—typically cattle pasture—has increased by 3.5 percent per year since the mid-1980s. Some 3.8 million cattle are now spread among 3,000 farms, according to one estimate. Ranchers in the Pantanal regularly use fire to maintain pastures and sometimes to clear areas to establish new pastures.

The expansion of pasture is evident in the pair of natural-color Landsat images above, which show part of Mato Grosso do Sul near Morrinho. While the area had minimal development and was mostly natural in 2000 (left image), much of it had been converted into pasture by 2021 (right image). Clearings for pastures appear as light green and brown rectangles. Surface water is dark blue.

“As in other parts of the Amazon Basin, we are essentially seeing an arc of deforestation and land cover change spread along the Upper Paraguay River,” said Renata Libonati of Federal University of Rio de Janeiro. “There is little that is natural about these fires. Some were probably lit intentionally to maintain pastures on or near ranches. Others were accidental but associated with human activities—things like campfires, burning trash, electrical wires, motor vehicles, hunting, and beekeeping.” Lightning sometimes ignites fires in the Pantanal, but these fires tend to be small, causing just 5 percent of the total burned area on average. Also, lightning-triggered fires generally burn in the austral summer (December-February) not the winter (June-August).

Further encroachment, combined with climate change and fires, is worrisome to Libonati. “We know that compound drought-heatwaves like we saw in 2020 are likely to become more common in the future due to climate change,” said Libonati. “It’s become obvious that we’re going to need long-term management strategies to protect the Pantanal from future fire outbreaks like this.”

Arc volcanoes are wetter than previously thought, with scientific and economic implications

Citation:
A human footprint on the Pantanal inferno (2022, February 4)